Could the staff of Eleven-ThirtyEight ask for a better opening? I submit that we could not. Here’s what we’d like to see.

Mike: If you follow Dark Horse’s Star Wars comics, you know that the whole “Darth Vader and the…” shtick is old news. Vader’s name and visage on the front of a Star Wars book has much the same effect as Wolverine’s on an X-Men book, so it’s understandable that they’d want to milk the widespread interest in everybody’s favorite Sith in as many disparate ways as possible. You can only squeeze so much genuine angst out of that kind of repetition, though, so to stave off diminishing returns, my advice would be to forget the angst and really go nuts with it—think the Scott Pilgrim books meets Super Best Friends Forever. A bunch of five-minute animated shorts, each a different style, featuring the no-holds-barred takedown of a different wayward Jedi.

Get a different creator to produce each one—the Rebels people, sure, but also Craig McCracken, Lauren Faust, Bruce Timm, Wolf Smoke, and hey—Genndy Tartakovsky might even still be taking their calls. And of course, Vader’s Jedi opponents should be as diverse as the animation styles; from imposing brutes like K’Kruhk to wily munchkins like Tsui Choi to serene masters like Zao. It’d still be repetitive, I suppose, but it’d damn sure be interesting.

Lucas: The natural pitch for this is Vader vs. Jedi — but we’ve seen a lot of that already in various Purge and Dark Times comics, and I’m not convinced that there’s a lot of mileage to get out of stories that are just based around lightsaber fights. What I’d really like to see is a special that avoids the Jedi entirely and focuses on Vader’s life within the Empire when he’s not hunting Jedi. Set it one or two years into the Empire as Vader leads a campaign to crush Separatist remnants on the Outer Rim. I’d like to see Vader not as a killer, but as a leader and manipulator: finding ways to outwit a wily adversary, cultivating useful followers in the military, building a working relationship with Tarkin, and outmaneuvering a political rival propped up by Palpatine who wants to discredit his handling of the campaign and take control instead. Of course Vader would get out on the battlefield and into his fighter, but there would be a larger focus on how Vader is building his power base within the Empire; learning to be the cold, commanding mastermind of the OT; and figuring out how to play Palpatine’s political mind games.

Jay: One missing facet of Darth Vader that was never truly communicated is the misguided idealist. In AOTC, Anakin Skywalker lays out his ideas about a benevolent autocracy: and we’re at least led to believe that he honestly believes in the Empire as an answer to the corruption of the Old Republic. We know from various EU sources, from the Goodwin comic strips to the Return of the Jedi novel that Vader despises the flatterers and schemers within the Empire’s command structure, but any confrontation that Vader has with others in the Imperial command structure tends to focus entirely on eliminating rivals to his power. 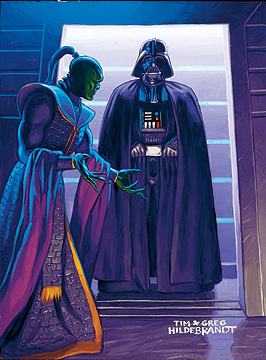 That’s well-trod ground; instead, we should see Vader as the crusader for efficiency and just (but ruthless) government: we’ve seen how Vader runs his ships, but what about the Empire as a whole? Of course, a special about Vader making the trains run on time is boring — so his opponent should be someone powerful and important. Similar, perhaps, to the villainy of Prince Xizor, but one within the Empire and one who is not seeking to supplant Vader, but just trying to feather his own nest. We might see echoes of Anakin, or better yet, a dark reflection: a perversion of the idealism of Anakin Skywalker. Within the ethos of the Empire, Vader’s actions should seem positively heroic — but when compared to the Jedi Skywalker, they should seem positively horrific.

Ben: Can you have a story without featuring Vader much yet have it be all about him? Can less be more? Some of the best Vader stories are where he dominates the proceedings but is frequently unseen, just the fear of being noticed by him determines the actions of the characters. Though absent from the story in terms of being on-stage, Vader nonetheless looms over these as a giant spectral force of dread. There’s 2 precedents for this sort of story – the Coruscant Nights books, where the heroes manage to confound Vader and a Republic story called Loyalties where an Imperial defector finds all paths lead to him and death.

In a way, this style of story is also evocative of Garth Ennis’ Punisher Max run, whereby he did little with the main character, instead having characters and events pivot around him. Castle himself? For the most part is a monosyllabic walking force of death incarnate – which Vader can be most effectively. He can’t be stopped, reasoned with and unlike the Terminator he wields the Force and a lightsaber.

The challenge on this story type is in the execution, which the likes of Ostrander and Ennis have made look deceptively easy. The trick is to get the reader to invest in the characters Vader is opposed to, to make the reader think they might have a chance despite the odds and then still make the loss seem a shock. Because Vader’s just a wrecking ball isn’t he? He doesn’t do guile…. does he?

Lisa: Not really sure if this counts as a response but here goes. I am completely underwhelmed by this concept and actually have nothing more of Vader that I want to see. For me, his story is over. We saw the beginning, we saw the end, and there are countless books and comics for the things in the middle. Each time something is added I feel like the awe-inspiring character that is Vader is being destroyed. I am worse off for things I have read and seen recently than how it was when that first excitement at hearing his voice and seeing him on the screen. I have no desire to continue seeing the myth and legend destroyed.

Mike: Well, I have to admit it’s hard to argue with Lisa on that one—yet the franchise persists, so Vader we shall have.

Actually, I think I’ll try a Hail Mary here—does anyone totally disagree with Lisa? You’ve done an admirable job coming up with interesting avenues for new Vader-centric TV specials, but ultimately, is it a tolerable idea at best? Or could such a thing really be worthwhile for introducing a new generation (or, I suppose, the generation who grew up watching The Clone Wars) to a character who’s long dead by the time Episode VII kicks off?

Lucas: I disagree. There are a lot of things that are played out in Star Wars, but Vader isn’t one of them. The Dark Horse comics where Vader stabs a Jedi or prevents a coup against the Emperor are laying it on too heavily at the moment, but Vader is the greatest villain of all time, and a fascinating character whom we can stand to see plenty more of, though it needs to be paced to avoid overexposing him. Lisa does have a point, though, that the current rush to jam Vader into a prequelized context and play up the Anakin-in-Vader angst does the character a disservice. It’s rarely written well — but that’s why I’m so eager to see Vader’s point of view written right and the transition away from Anakin to Vader handled (I considered pitching a concept based around Vader’s Sith training — something that we rarely see, but I would love to watch Palpatine instructing Vader in Sith techniques and philosophy, testing Vader with illusions and attacks and mind games that show him learning to embrace his role as a Sith and casting off any remnants of his identity as Anakin). 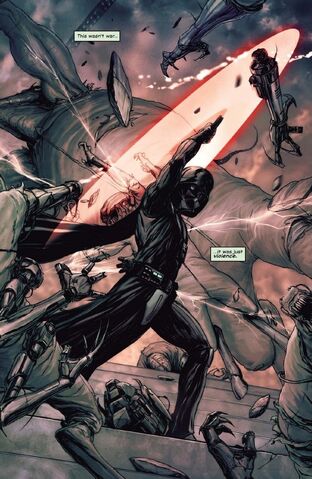 One of the ways around the difficulty of writing Vader well, though, is to avoid his POV entirely. Vader has been at his best in recent EU when we’re not privy to his thoughts, and he’s used as a mysterious, oppressive, omnipotent force sweeping through the story. Vader as inscrutable mastermind, unstoppable creature of darkness, and elemental terror is the stuff of a great villain. When Vader is hanging over the story as an awe-inspiring villainous presence, it’s great, but it’s also interesting to see the Imperial POV from someone working with Vader, rather than using Vader for that. That’s why I also wanted to pitch a Vader special that didn’t star Vader. Instead, have Daine Jir, the bold aide from A New Hope whose bluntness with Vader has always intrigued me, as the protagonist. Some of the most fruitful EU material on Vader has focused on his twisted relationships with those assistants competent and forthright enough to earn his respect, or at least his tolerance. I’d love to see a special that followed Vader’s right-hand man, exploring what it’s like to live in his shadow and how the officers serving under him handled his presence.

Alexander: I have nothing against more Vader stories, so long as they’re stories worth telling. If his character is being destroyed and we’re worse off for having more told about him, then that failing falls upon the shoulders of the writers and reflects the poor quality of their works, and has little to do with the potential inherent in a story about Darth Vader. Darth Vader and the Lost Command and Darth Vader and the Ninth Assassin were, at best, fairly mediocre comics. Darth Vader and the Ghost Prison, on the other hand, is without a doubt one of the single finest works the Expanded Universe has ever produced, and it only came out last year.

Yes, we’ve seen a lot of Vader, just as we’ve seen a lot of Fett, Han, Luke, and Leia, and every other person to appear on-screen during the saga. Yes, there’s been far too much focus on them, and yes, most of their stories are of somewhat dubious quality. But that doesn’t mean that we should simply stop using them entirely. They aren’t the problem, the people telling their stories are.

Thanks for joining us for this second edition of The Pitch! Stay tuned for round three, where we’ll be pitching…actually, I have no idea. Any suggestions?