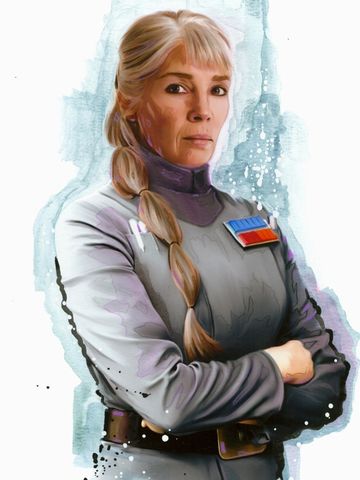 As we’ve discussed on this site in the past, the Galactic Empire has particular political and historical antecedents: among them, Nazi Germany, Imperial Rome, the British colonial empire, and even certain American presidential administrations. The Empire has taken many traits and trappings from these inspirations, from Nazi-styled military uniforms to a political organization that reflects the rise to power of figures such as Julius and Augustus Caesar, Napoleon Bonaparte, and Adolf Hitler. The tone of the Empire reflects both the successes – particularly of the more positive British and Roman examples – and darkest traits of these inspirations: military dictatorship, pervasive propaganda, and racial bigotry (in the case of the Galactic Empire, anti-alien bigotry).

Sexism never made much sense as being one of those defining traits of the Galactic Empire. Sexism in fiction generally has two authorial justifications: first, as a reflection of actual historical sexism in the setting of the story and second, as an attempt to engage and criticize contemporary sexism through the lens of a fictional story. Since Star Wars is an invented universe, the first justification is a bit of a reach despite the historical inspirations for the Galactic Empire, and the second justification is unconvincing because of the EU’s failure to adequately address in-universe sexism in a constructive fashion.

Sexism as a reflection of historical reality

If Star Wars were a historical fiction story set in the 1940s, then it might make sense that the antagonists – the Axis Powers – were sexist in addition to being fascist, racist, and all sorts of other undesirable –ists. Sexism in that context would reflect the historical reality and it would be part of an authentic setting. In that instance, the story may well be passive or even mute on the issue of sexism: preferring to show the period as it was, and characterize a conflict according to the mores of the day. Or, the author may craft a story that does not accept the historical status quo, and sends an anti-sexist – or at least a critical – message about the practices of the day.

Star Wars is not a historical story, but it does have some real-world historical influences. Consequently, importing some of these historical traits may be legitimate – if there is a legitimate purpose behind doing so. The Galactic Empire shares many of the negative traits of its creative inspirations because it serves as a villainous government, and can function as an evocative sort of evil: the Jedi Purge/Order 66 is a genocidal act that resonates deeply to the audience and users in the ‘Dark Times’ that characterizes the initial institution of the Galactic Empire. The uniforms and the omnipresent stormtroopers also helps situate the viewer within the proper thematic lens.

But what about sexism? Was sexism a characteristic unique to Nazi Germany, Imperial Rome, or the British Empire? Not at all – Imperial Rome in particular may be thought of as well ahead of its day in women’s rights, even if regressive by modern standards, while Nazi Germany was hardly alone among the nations of its time in not treating women equally. The Empire’s sexism doesn’t easily evoke a historical association or familiarity at all.

That’s alright though – institutionalized misogyny is not a desirable trait in a government, and the Galactic Empire represents an evil that the heroes fight against. Though it’s not a trait that its historical antecedents are known for, the Empire’s sexism can still help the audience engage with and reject the practice, just as the Empire’s other horrors are rejected by the audience. After all, while the Empire seems neat and orderly, it destroyed a planet in the first film in order to accomplish its ends: that example highlights powerfully that order brought at the end of the sword is not a goal worth pursuing. But does Star Wars do the same thing with Imperial misogyny?

The lack of a meaningful engagement with sexism

An invented universe avoids a lot of baggage that the real world has: racism, classism, sexism, and a myriad other problems associated with the lovely things that humans have done to their fellow human. An author has the luxury of inventing from whole cloth an entire history of civilization and society, and can choose whether or not this invented universe has imported the problems of the real world or not. Sometimes these problems leak in, revealing authorial biases or societal biases that are not successfully expunged – such as in Battlestar Galactica, where the military is supposedly egalitarian but women are still treated as if they were the gentler sex. Other times, these problems are intentionally imported into these settings as a way to criticize them in another setting – such as the recent video game Dishonored, which imports the sexism, disease, and grime of the real world Victorian era in order to expose it to the glare of harsh criticism.

Star Wars is an invented universe. It is a universe with a long history and an extensive continuity. The Galactic Empire of the original trilogy was preceded by an Old Republic of 25,000 years, which was a sort of idyllic golden age: a blend of the glory days of democratic Athens or Republican Rome with the Arthurian nobility of Camelot. It was an almost unbelievably perfect government – though we now know its history was somewhat marred in its final millennia – which was corrupted into the Galactic Empire. But through this history, we know that Star Wars has no history of sexism on the galactic scale: the Empire decided one day that it wanted to be sexist, with no explanation why. There’s none of the historical baggage of the real world: no legacy of a time where men were hunters, conquerors, or knights and women were merely homemakers. In the Old Republic, men and women were equal.

Where did it come from? Nobody knows – and the sources are silent. There’s a missed opportunity. The anti-alienism of the Empire doesn’t suffer the same deficit: the Clone Wars products show the origins and rise of Imperial anti-alienism, numerous books and novels discuss its dark nature and the problematic consequences contained therein. The Rebellion often defines itself against the anti-alienism of the Empire, as its literal success is owed to its diversity: even within the films we see that the Rebellion owes its victory to the Bothans and the Mon Calamari. Yet while the films show a stark lack of females among the Imperial ranks, the material is surprisingly sparse on the matter. Do we see the Rebels championing gender equality and framing their success to their gender inclusiveness? No – the only real engagement with Imperial sexism is through Imperial characters themselves.

Here we find the real problem. There are precious few prominent female Imperial characters – this makes sense in light of the misogyny attested in the Imperial command structure and New Order ideology, but the EU deals with them in a poor manner indeed. While there is substantial evidence that female Imperials are plentiful in the lower and middle ranks of the Empire, high-ranking examples are relatively rare – and most are relegated to obscure references in sourcebooks. As villains, Imperial characters are given much less development than those in the Rebellion or New Republic, but it’s rather telling how the small handful of female Imperials prominent in the EU are treated.

The few Imperial females who are given prominence in the EU are not only uninspiring, but they are downright alarming. The three that come to mind for us are Director Ysanne Isard of Imperial Intelligence, Admiral Natasi Daala of the Imperial Navy, and the soi-disant Moff Leonia Tavira. All three of these characters are alleged to have reached their rank by their sexual liaisons with a prominent male character, and it’s important that these allegations are not only spread throughout the misogynistic Imperial ranks, but also through the perspectives of the “good guys” as well. These characters are also aggressive, impatient, and rather dismal failures – with Tavira being the closest to competence among the three. Their beauty and sexuality is always highlighted in the narrative – it sounds rather alike the worn sexist trope of the power-hungry woman, who is willing to do anything and everything to sate her ambitious desires. It’s not a positive thing at all.

It would have been well and good if the narrative had underscored that the Empire forced these women to act this way to succeed or to survive. It would have been well and good if the narrative underscored that the Empire only allowed such women to succeed. But no such engagement is ever made – and indeed, the implication is that these women succeeded in spite of Imperial sexism and not because of it. There is never a connection between the sexism in the Galactic Empire and these negative character traits exhibited by these women. Instead, we have a rather sexist and misogynistic portrayal of the few female characters to amount to anything in the Galactic Empire – and the few female villains among the saga as a whole. It rather feels like Star Wars is underscoring and endorsing misogyny rather than exposing and demolishing it.

Indeed, the closest thing we get to a positive portrayal of an Imperial as a female character who earns the respect of male characters is Mara Jade as the Emperor’s Hand: and she’s a character whose creator explained was a good guy the whole time. It’s understandable that Star Wars doesn’t want to elevate its villains, but Star Wars’ male villains are not treated in a stereotypically dismissive fashion: why are its female villains?

Conclusion: the Empire can be sexist, but Star Wars should not be

Sexism in invented universes should have a purpose. Otherwise, it reflects an invasion of undesirable and unwanted real life issues into a fictional setting. If Star Wars is escapism, why can’t we escape the negative traits of our own society in this setting? And if we can’t escape them, can we at least engage with them in a constructive fashion?

We can only hope that as Disney-owned Star Wars revisits the Galactic Empire in the future – particularly in the television series Rebels – Imperial female characters are given their due. Ideally, the Empire would not be sexist at all because it doesn’t make much in-universe sense. But if it had to be, we hope that the show actually engages with the theme. We underline this show in particular because its premise is geared around showing how people live under the Empire: how they are at first wooed by its opportunity and stability, but are then forced to rebel against it. Among the anti-Jedi, anti-alien, and anti-democratic tendencies of the Empire, we hope the show also examines its anti-women policies and we hope the show shows them to be wrong, either by showcasing the cost it has on women or by showcasing positive examples of women who are not given their due by the Imperial regime.

2 thoughts to “Senseless Sexism in the Galactic Empire”