This story happened a long time ago in a galaxy far, far away. It is already over. Nothing can be done to change it.

In my ongoing feature The Expanded Universe Explains, I go out of my way to maintain a lighthearted, conversational tone to add a little flavor to what is essentially just a recitation of secondhand information—book x said this, which was expanded upon by a stray line in reference book y. It’s all fairly absolute, to the extent that made-up information can ever be absolute.

What I mean to say is, I originally thought about covering this topic in an EU Explains piece, but I have to admit that as clear as it may seem to me, there are few things in the Star Wars saga that are more subjective than the Prophecy of the Chosen One. Reasonable minds can disagree on the following, but this is How I See It.

What does it mean for Anakin Skywalker to have brought balance to the Force?

When those blades met, it was more than Yoda against Palpatine, more the millennia of Sith against the legions of Jedi; this was the expression of the fundamental conflict of the universe itself.

Like most things of any significance in the Galaxy Far, Far Away, the history of the Sith is long and convoluted. By the time you read these words, the final thirteen episodes of The Clone Wars will have made their debut on Netflix, including an arc revolving around this very subject. But while the details are constantly evolving (to use a charitable word), what we can say is this: the dark side has always been with us.

The Sith Order itself dates back to a Jedi schism about seven thousand years before the films; a group of Jedi thirsty for greater knowledge of the Force fell to the dark side and were exiled to parts unknown. Eventually they came upon the planet commonly known as Korriban (though check with me again next week), whose native sentient species was the red-skinned, proboscis-chinned Sith. The fallen Jedi used their fancy new evil powers to rule the planet, becoming the Dark Lords of the Sith (get it?).

For a couple millennia, these Exiles (just twelve at first) expanded slowly through their immediate region of space. Despite making them increasingly stir-crazy, this relative isolation also gave them lots of time to continue poking the Force with a stick to see what would happen. The result was a host of different spells, alchemical processes, and so on to rival the twenty thousand years of extant Jedi lore. This is important, because it explains why a Sith Lord is a much bigger deal than a “normal” Dark Jedi like Asajj Ventress—Ventress may have a full set of Cosmos VHS recordings, but Palpatine is Carl Sagan.

Eventually, the Sith and the Republic sort of rediscover each other, and officially go to war. Then the Sith are defeated. Time passes, and eventually a Jedi Knight stumbles across a Sith holocron, falls to the dark side, and starts another war. He’s eventually defeated, then a generation later…well, you get the idea. Once the Sith genie gets out of the bottle around 5000 BBY, there’s not really any going back, and this sort of thing keeps happening for thousands of years. By 1000 BBY, the galaxy is basically twenty percent Republic space, twenty percent Sith space, and a whole lot of anarchy in between.

Which brings us to the Battle of Ruusan, where the Sith Lords made their last stand, killing themselves and the Jedi’s “Army of Light” in the process. Only Darth Bane makes it out, and having seen Sith hubris lead only to pointless destruction, he implements the Rule of Two, which brings us to Palpatine.

The remaining Jedi, meanwhile, spend those thousand years evolving from a balls-out “Army of Light” paradigm into the brown-robed, navel-gazing noninterventionists seen in the prequels. Which brings us to Anakin Skywalker.

The Clone Wars have always been, in and of themselves, from their very inception, the revenge of the Sith.

They were irresistible bait. They took place in remote locations, on planets that belonged, primarily, to “somebody else.” They were fought by expendable proxies. And they were constructed as a win-win situation.

The Clone Wars were the perfect Jedi trap.

By fighting at all, the Jedi lost.

With the Jedi Order overextended, spread thin across the galaxy, each Jedi is alone, surrounded only by whatever clone troops he, she, or it commands. War itself pours darkness into the Force, deepening the cloud that limits Jedi perception. And the clones have no malice, no hatred, not the slightest ill intent that might give warning. They are only following orders.

If you’re keeping score at home, this is where things start becoming subjective. The Prophecy of the Chosen One states that “in the time of greatest despair, a child shall be born who will destroy the Sith and bring balance to the Force”. How balanced it was to begin with is not totally clear, but we do know that the imbalance became far worse during those last thousand years, to the point that the Jedi sensed it, and as they say in the prequels, their powers of perception began to diminish. The generally-understood cause for this is the actions of Bane’s Sith—with no rival darksiders and all the time in the world, the Banites turned inward as the Sith had at their inception, and grew steadily in power with each successive Lord. And as the dark side became more and more concentrated in the hands of only two beings, they became ever more adept at shaping events in the galaxy to their own ends.

The darkness the Jedi sensed wasn’t just vague clouds of power off in the distance; it was real malevolence, at a societal level. The Republic government became inept and venal, and rather than attack the cancer creeping in at their extremities, the Jedi Order’s response was to hold the center at all costs. They’d seen what happened to a galaxy without the Republic, and they began to conflate the two, not realizing that the Republic was becoming the cancer—well before Palpatine ever took office.

As the dark side crept onward, the Jedi also became hyper-aware of their own susceptibility. Without the temptation of Sith teachings, the only thing that could bring down a Jedi was himself, so every effort was made to imprint the perfect temperament upon each and every Jedi. Recruits got younger and younger. Attachments were forbidden, so no more family time for those recruits, either. The Jedi Temple, for all its good intentions, became a factory; and the Order an assembly line of interchangeable, homogeneous white pawns. 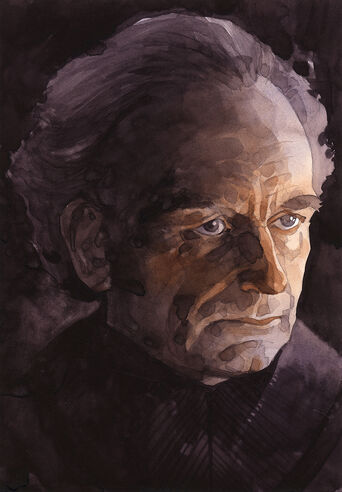 And it had to go.

But, of course, that’s ridiculous. The Jedi had become wholly subservient to not the ideals but the institution of the Republic, and in doing so they’d missed the Force for the trees. Corrupt the government, as the Sith had done, and you corrupt the Jedi automatically; you don’t have to lay a finger on them.

It’s like that old saying—never wrestle with a barve. You both get dirty, and the barve likes it.

The Sith had changed. The Sith had grown, had adapted, had invested a thousand years’ intensive study into every aspect of not only the Force but Jedi lore itself, in preparation for exactly this day. The Sith had remade themselves.

They had become new.

The Jedi had spent that same millennium training to refight the last war.

The new Sith could not be destroyed with a lightsaber; they could not be burned away by any torch of the Force. The brighter his light, the darker their shadow. How could one win a war against the dark, when war itself had become the dark’s own weapon?

He knew, at that instant, that this insight held the hope of the galaxy.

So, my point is, Anakin Skywalker brought balance to the Force not just by killing Palpatine, but by pruning the Jedi down to a stump—that the survivors might ultimately get their shit together.

People don’t always react well to this, because it suggests they were morally culpable in their own genocide. But I’m not saying that, really—they weren’t bad beings, and they didn’t deserve to be slaughtered, but they were part of a bad paradigm; one which abetted and facilitated every single step of the Sith plot. You could say the same thing about the clone army, in fact—they may have been nice enough guys, but that doesn’t negate the fact that they shouldn’t have existed in the first place.

“Too old I was,” Yoda said. “Too rigid. Too arrogant to see that the old way is not the only way. These Jedi, I trained to become the Jedi who had trained me, long centuries ago—but those ancient Jedi, of a different time they were. Changed, has the galaxy. Changed, the Order did not—because let it change, I did not.”

Remember, the Force plays a long game. It’s not light or dark in and of itself, it simply is. When a herd needs culling to protect a larger population, that’s neither good nor evil, it’s just the way of things. Likewise, Anakin himself was never exactly a Jedi or a Sith; he was the Will of the Force made manifest, and I don’t think it was dumb luck that the Force felt like he should be Darth Vader for a while. Remember, the thing that touched off his ultimate fall in Episode III wasn’t a friendly chat with Palpatine, or an argument with Obi-Wan—it was a vision.

Still with me? Be sure to come back on Monday for the second half of Checks and Balances, where I really go out on a limb.

6 thoughts to “Checks and Balances, Part I – Son of the Suns”