CGI Data Monkey hits Run on his computer panel, goes down the pub for a swift couple of pints, comes back a couple of hours later and blam! Work’s done.

There’s only one pointed question to ask at this point: Ever used a computer? Because this is what would actually happen:

CGI Data Monkey spends long hours building the graphics to be animated, specifying down to the nearest detail the nature of the animation, with the entire sequence perhaps lasting a few seconds. CGI Data Monkey then hits Go for a test version and the computer asks: Are you sure? 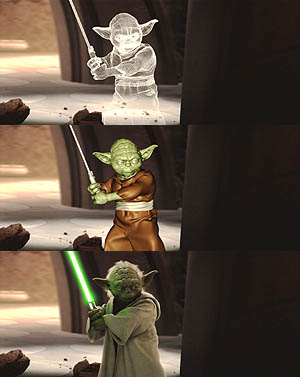 Computers are dumb bastard machines that are only as good as the user in control of them. That in turn is entirely dependent on the user’s knowledge of how to use the technology and their level of skill. By themselves? Computers do fuck all! Anyone who has ever used a computer knows this and that’s most of us, but where CGI is concerned? The brain flicks onto autopilot, loads the CGI is lazy charge and forgets that the C stands for Computer!

Second, the filmmakers and I’m looking at you Mr. Lucas, yes, stop hiding at the back of the room. Filmmakers have not helped CGI by the way they present it. How often do you see a Making Of extra and the director or producer is going – we’ll green/blue screen this…. And that…. And that…. That too. What you ought to see is a CGI tech listening to this going: Ok, 20 hours work…. Now 30…. Now 40…. Now 50…. The sense the viewer gets is that the creators just snap their fingers and lo and behold! CGI imagery doth appear!

Still, even when placed together these two factors alone do not completely explain the bottomless loathing and contempt for CGI. What else might be at work? There are two further points to consider – SFX fans and the sense that CGI is being used as a crutch to make up for the shortcomings of a story.

When CGI first came along there was a sense, touted by some too, that it would come to supplant and replace other forms of effects work. Looking at the history of technological development would advise that this fear is unfounded – technologies develop and can exist in parallel – you only have to look at the continued use of vinyl records for evidence of this. Nonetheless, the sense was there – that directors would hit a button and be able to magically invoke virtual actors and worlds. The old worlds of matte paintings and scale models would be gone!

That turned out not to be so, but nonetheless, CGI occupies a position of such public prominence that it eclipses from view all other methods. Despite that, despite Lucas’ frequent citing of CGI, the prequel trilogy used it alongside the older methods. For instance, the droid armies are created en masse by CGI, but their design was first done by model so as to account for three dimensions. The CGI crew can then step in and use that as a reference for all that follows. Weta Workshop did much the same, on vast scale, for the Lord of the Rings but it tends to be the PT that still gets the flak which brings us to the final aspect.

There is always a tendency for directors to go overboard with the effects in the hope that they will obscure and hide the weaknesses of the story. That an onslaught of high-speed, top-grade imagery costing millions will dazzle the audience. This is likely where CGI receives the most venom, it gets crucified for its poor and clumsy usage by

reckless directors. The chief culprit here is Michael Bay, whose sequences of digital carnage are often breathtaking but oddly empty. Audiences want the effects to matter – the revealing and launch of the helicarrier in The Avengers is a CGI masterpiece and no one cares that it is. No one asks how it was achieved because the sequence is so well executed.

All in all I conclude it is wrong and unfair to rain down vitriol and contempt upon CGI, for it is but a tool. If anyone should be blamed for poor, clumsy or worse, manipulative usage of it, that person is the director. Directors set the tone and the vision for a film. They are involved in every part of the film process – script, casting, shooting, and post-production, and they receive the due credit for being so. With credit so too goes the brickbats.

Finally, one last question: Are you certain what you are seeing is indeed CGI? It was thought that the sequence where the USS Vengeance is boarded in Star Trek: Into Darkness was a digital creation. Watching a DVD extra reveals this wasn’t actually so, it was all done in a warehouse with clever lighting! You see filmmakers play the ‘we did not use CGI’ card quite a bit – Death Race is an example of that. Other filmmakers are quite happy to trick their audience – oh, you think that was CGI, do you? After a decade or two of development, CGI is at the point where, if used skillfully, it can be very hard to tell what is or is not digitally created. In such a world there can be only one guide: Don’t be too quick to judge!