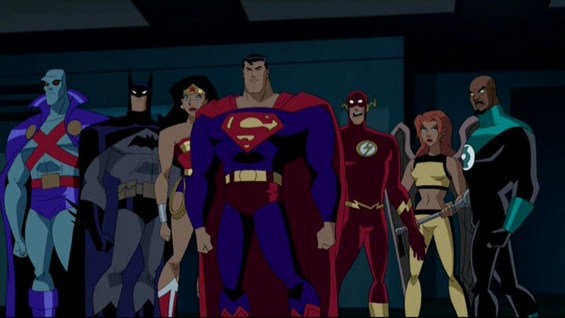 As I’ve mentioned, well, repeatedly at this point, I’m unusual among my generation (and certainly among people with Star Wars websites) in that I didn’t really grow up with Star Wars. My first exposure to the original trilogy was the release of the Special Editions, at which point I was already almost 15. I have no memories of the films correlating with my early development, my understanding of narrative, or my appreciation of science fiction and/or fantasy. In fact, I’m still not really into sci-fi and fantasy to the extent that many SW fans are.

No, growing up, my thing was superheroes. My earliest genre memories are of the original Ninja Turtles cartoon in the eighties, which led to Spider-Man and X-Men in the nineties, which led to buying actual comics around 1995, which I’ve been collecting pretty much ever since.

But despite my natural affinity for Marvel properties, the genre throughline from childhood all the way to my college years was the DC Animated Universe. I was ten when the first episode of Batman: The Animated Series debuted in 1992, and I still remember it vividly all these years later—because that episode, spearheaded by visionaries Paul Dini and Bruce Timm, ended up ushering in an expansive new DC continuity that lasted more than a decade in animated form, and technically continues in comics form to this day. From Batman to Superman to Batman Beyond to Justice League (with the occasional Static Shock and Zeta Project thrown in for good measure), Dini, Timm, and others built a shared universe rivaling its comic-book predecessor (and in my opinion, often surpassing it in quality), developing disparate elements—and, crucially, voice actors—from series to series and era to era in a way that imbued each new story with a weight that’s rarely seen in children’s television. The DCAU taught me what expansive, long-form storytelling could do, and I owe my appreciation of continuity in Star Wars to that example. Here are some of its other lessons.

Back in the early days when the DCAU was just li’l old Batman and friends, the series made its first big splash by going the exact opposite route of breezy, light-hearted shows like Ninja Turtles and really embracing the gritty, bleak nature of Gotham City—to the point of creating all its backdrops on black paper rather than white, as was naturally the norm. Furthermore, it took characters that many considered silly and injected as much pathos as it could manage. Most notable among these was Mr. Freeze, whose new origin story in one of BTAS’ earliest episodes introduced his now-familiar ailing wife Nora, whose treatment pushes Freeze into his new life of crime.

In an interesting case of the tail wagging the dog, the series’ grim direction was largely inspired by the original Tim Burton Batman film in 1989, but when the films eventually got around to Mr. Freeze in Batman & Robin, they used the backstory from the TV show—even the comics eventually followed suit, thanks to DC’s proclivity for reboots.

Conversely, the series’ original take on the Penguin was heavily inspired by Danny DeVito’s version in Batman Returns, but when that take proved uninspiring, they took the opportunity of a top-to-bottom redesign in The New Batman Adventures to retool Penguin into a more dapper mob-boss-style underworld figure, complete with a hideout that doubled as a swanky night club.

Having just undergone a “redesign” of sorts itself, this last example in particular can apply nicely to Star Wars; and indeed, there are early indicators that the current shepherds of SW storytelling have learned the lesson well. The Expanded Universe of the nineties made some questionable decisions in its interpretation of the Empire, among which were the presence of institutionalized sexism (and though it’s never stated outright, an argument could be made for racism as well) in a culture that’s been living with aliens for tens of thousands of years. If A New Dawn is any indication, this premise may well be behind us in the new canon—and if there’s going to be a new canon, the least it can do is work for us.

Moving on to the sequel trilogy, we find ourselves waiting patiently (ish) for the arrival of a new generation of heroes in the form of Daisy Ridley and John Boyega (and others, but these two are thus far the only safe bets for protagonists in my opinion). Whether or not these new characters bear the names Skywalker or Solo, their creators will need to respect what made their predecessors so great while still existing as individuals in their own right.

When the DCAU decided intially to jump past Batman and Superman’s Justice League years in favor of creating a brand-new Batman of the (snicker) 21st century, they couldn’t help but give him hints of Bruce Wayne’s origin. Problem child Terry McGinnis was already a teenager when he lost his father to corporate douchebag (and Wayne rival) Derek Powers, but unlike Bruce, he still had a mother and a young brother to guide him toward the side of the angels, so when he stumbles upon Bruce’s secret, his choice to assume the Batmantle is as much about protecting what he was as avenging what he’s lost.

Where Bruce rebuilt himself from the ground up, Terry is still very much the same guy he was before—like Peter Parker, doing good is a special effort, not a crusade. And as Terry grows into the role through three seasons and a movie, the differences between him and the elderly Bruce Wayne only grow. In Return of the Joker, for my

money the high-water mark of the entire DCAU, Terry is being taunted and mocked by the resurrected Clown Prince of Crime for not living up to the original, and sure enough, Terry demonstrates just how much he’s not like Batman by mocking the Joker right back. Joker always counted on Batsy’s über-seriousness to bounce off of, so he’s not prepared for comebacks, and quickly loses his temper—giving Terry the opportunity to take him down.

The sequel trilogy’s biggest challenge is telling a story of its own; something that’s of equal stature to the existing saga but without feeling tacked on. To this end, it cannot simply parallel Luke Skywalker’s journey with a new face, no matter whose offspring they are. The same goes for the “Han” and “Leia” figures—in fact, the best thing they can do in my opinion is to stymie the easy comparisons I just made. Make the young Jedi figure the rogue of the group. Make Daisy Ridley a junk dealer. Hell, kill off one of the young’uns rather than the venerable retiree for once—while the Expanded Universe unquestionably went too far with this, demonstrating that the next generation isn’t safe and that character deaths aren’t limited to the saga clichés remains a vital element in keeping new fans invested in their story.

Continuity is only valuable if you use it

Ultimately, the DCAU did return to the present for its final TV series, Justice League Unlimited. As the title would suggest, JLU took the already staggering count of established characters and, after focusing mostly on the “big seven” Justice League members in the first couple seasons, pretty much doubled it. You would think that would have kept them too busy to do much with the existing characters from earlier series, but you’d be wrong—Lex Luthor remained a fixture of the show’s rogue gallery, of course, and despite the series’ tendency to forget the alter-ego sides of the Justice League’s lives, even Lois Lane and Jimmy Olsen showed up from time to time.

You’d also think that JLU being set in the present would mean no material from Batman Beyond, but you’d be especially wrong there. The DCAU Justice League’s first appearance was actually the future version in a two-part Beyond episode, and even after the end of that show JLU would revisit the time period multiple times, including in Epilogue, an episode that was written as a potential finale for both JLU and BB, and carried its present-day story all the way through to a much-older Terry McGinnis, where it wraps up elements of his character arc as well.

In addition to direct visitations via time-travel and flash-forwards, JLU also did a great job of building steadily but gradually toward Beyond‘s status quo. One example was its showcasing of the original form of the Royal Flush gang, a playing-card-themed group of bad guys taken from the comics but which had first appeared in Beyond. The most well-known example, though, is probably the relationship between Shayera Hol, Hawkgirl, and John Stewart, the JLU era’s Green Lantern. While the earliest hints of the relationship appeared early on, the creators knew that getting the characters together was much less important than the story that got them there, so they took their sweet time over several seasons—even breaking them up for a while. Of course, the reason they could get away with such a slow burn without driving the shippers crazy was because longtime DCAU fans knew they’d end up together, because we’d already met their child, Warhawk, in Batman Beyond.

Warhawk’s first appearance predated the beginning of the romance plot in Justice League by several years, but seeing the character in action—lacking natural wings like most of DC’s hawk-themed heroes and with a complexion suggestive of humans of mixed race (John Stewart is black and Hawkgirl, though an alien, is effectively white)—made it clear very early on where Jon and Shayera’s flirtation was leading, and even as a longtime devotee of the DCAU, I’d be hard-pressed to guess what idea came first, the character or his parents.

Making this point where Star Wars is concerned is kind of a double-edged sword, because there barely is any continuity for new material, films or otherwise, to reference. And as much as us EU fans love diving into a book like Darth Plagueis that seamlessly weaves together all manner of earlier sources, it’s now much harder to imagine that book taking place in the SW canon than, say, Kenobi, a book that’s every bit as awesome but takes place effectively in a bubble—and is highly unlikely to ever be contradicted.

So I guess what I’m hoping is that the Story Group will learn from the DCAU’s use of continuity going forward—and indeed, there are scattered (and over-the-top) reports that the Disney era of Star Wars is going to “redefine longform storytelling”, implying that not only will conflicts be less common, but that everything that does come out will weave into and feed off of everything else rather than existing in a bubble. While that might—might—mean a less hospitable environment for enjoyable standalone stories like Kenobi, it is nevertheless an exciting prospect to consider.