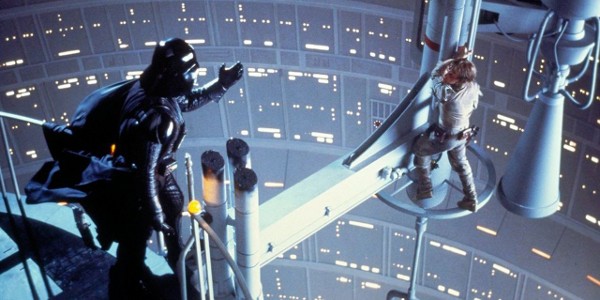 Well, it took a good long time, but after more than a year of gleefully picking apart the rumors coming out around Episode VII, I finally had to make a judgment call. A couple weeks ago, Making Star Wars ran a spy report detailed what they claimed was the film’s “I am your father” moment. I’m not linking directly to it, but it should be easy enough to track down if you desire. As I’ve explained before, my standard operating procedure is to immediately assume all rumors are bullshit, simply because of the thousand mitigating factors between what someone says online and what’s actually going to appear in the finished film fourteen months from now. Even if you assume the rumor reports are coming from people who genuinely believe them, there are just too many variables in play to hang your hat on anything not released officially by Lucasfilm (or, in other words, pretty much anything at all).

But the whole “I am your father” thing gave me pause. Despite not seeing the Star Wars films as a child, one of the exceedingly few things I knew before I finally did see them—and to put this in perspective, I can distinctly remember a time when I thought Harrison Ford played Luke Skywalker—was that Darth Vader was Luke’s father. It’s almost impossible to exist in modern western society and not know that, even if you don’t have an iota of context for that information.

So despite the fact that I promptly fell in love with the franchise anyway, I didn’t get to truly experience one of its defining moments. I’ve always said that if I had one wish, it wouldn’t be for money or power, it would be to go back in time and see The Empire Strikes Back the way that lucky first generation did; to discover just how blown away I would have been by it.

On the one hand, when a story has a genuine twist like that, preserving the experience is of paramount importance to me. But on the other hand, when I read this landmark piece about “anti-spoiler paranoia” by ex-AV Club editor Todd VanDerWerff a few months back, I pretty much agreed with it. The gist of VanDerWerff’s point was that plot is but a tiny piece of what makes up great art, and to view a work as substantial as Breaking Bad, to use his example, as being “ruined” if you happen to know what happens in the final thirty seconds of it is to do a serious disservice to that work, and perhaps just as importantly, to stifle the discourse the work might otherwise generate.

So, to make a long story short, for the first time, I’ve chosen to deliberately avoid a piece of alleged Episode VII plot information. Other pieces may follow; it’s just impossible to know at this point. But I thought this would be a good opportunity to carve out a little space for those of us who don’t flee in terror from every Episode VII news item—you know, that friend of yours who yelled at you for showing them that first black-and-white cast photo—but also respect the sanctity of a well-earned surprise now and then. So having said all that, here is what I believe does and does not constitute a spoiler:

I’m sure this particular list could be debated until the end of time, but in my opinion, these are the things that a person with no foreknowledge probably wouldn’t expect to happen during the course of the six existing films—or at least would be caught off-guard by (I debated adding “Sidious is Palpatine” to the list, but c’mon). Notice what’s not on there? Both Death Stars, Maul’s death, Dooku’s death, Tarkin’s death, and Anakin’s fall, to name a few. Even Anakin’s fall—or, say, Lando’s betrayal at Cloud City—is, despite being surprising to the characters, telegraphed clearly enough that a moviegoer of average intelligence would at the very least have a hint that something was wrong here.

You’re meant to feel uneasy about Cloud City, even if you can’t tell exactly what’s coming. You’re meant to sense that Anakin is drifting off the reservation, whether or not you realize Palpatine’s true motives. So to me, knowing those particular details going into their respective films isn’t the end of the world. Likewise, despite being one of the greatest pulse-pounding climaxes in movie history, everyone knows, I think, at some innate archetypal level, that Luke is going to blow up the Death Star—because that’s how these stories work.

So I guess what I’m saying is, a spoiler to me is something that goes against what you feel is going to happen. It’s not about plot details, it’s about a sudden shift in the dramatic weight of the story. And if I can manage to avoid those, “so-and-so goes to Planet X and fights Robot Y” doesn’t bother me. It’s Star Wars; that’s how it works.