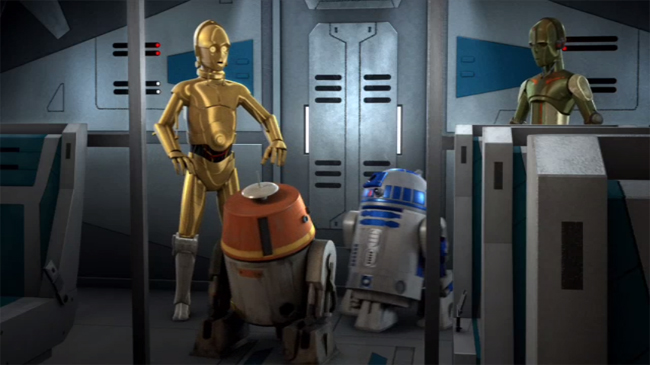 In many ways, the events of Droids in Distress provide us with a snapshot of how the two major factions of the time treat the universe’s ubiquitous mechanical sidekicks. There is a stark contrast between the Imperial treatment of droids and the way the rebels interact with the droid member of their own crew, as well as this week’s special guest stars.

One the one hand, Imperial law states that droids are to spend transit time aboard commercial transports in the rear of the passenger compartment. Droids are apparently role-players, given a job and expected to do it without frills or complaint, and not expected or ordered to do anything exceeding their programmed and designed purpose. When the administrator protests at Threepio being sent to the rear of the ship, it is because she needs him to translate for her, not because he deserves to be up front instead, or is in any way special. He and Artoo, to her, are nothing more than utilities on legs (and wheels).

To counter that, when Chopper comes aboard the transport with the rest of the Ghost‘s crew, he is not there as a mechanic or computer interface, even though that is technically his role aboard their ship. Chopper is there as an essential part of their charade, a player in their plan to foil an Imperial plot. For the rebels, Chopper is a full-fledged member of the crew, and they do not think twice about asking him to do whatever task they need him to do for the mission to succeed, even if it is not something he is built or programmed to do. And Chopper, grumbling all the way, goes along with it.

This sort of contrast should not be a surprise. In many ways, this is a reflection of the philosophies both groups have about beings in general, not just droids. The Empire values utility, efficiency and hard work without recognition. Their stormtroopers, for instance, are nameless, faceless soldiers treated as an expendable resource, with numbers instead of names. Even officers and officials, whose names are known and faces are seen, are encouraged to strive more for the success, security and glory of the Empire than their own personal ambitions.

The rebels, in contrast, seek the better of others and preach the value of the individual. They are organized, but also individualized, each with their own role, but eager to help serve wherever they are needed. Improvisation and personalization are encouraged, as the spray-paint covering Sabine’s bunkroom attests. Every member of the crew is valued, everyone has a vote when decisions are made, and no one is left behind, not even the Lothal street-rat who had joined them through happenstance.

While the Ghost’s crew does debate selling the stowaway Artoo and Threepio in lieu of another payment, they ultimately deign to reunite the droids with their owner. When the pair end up back in Bail Organa’s company, he does not treat the droids as mere property, either. To him, they are confidants, information-gatherers, agents meant to foil one small part of the Empire’s designs. In many ways, they are the perfect spies, because it takes quite a lot for the Empire to notice a droid.

The line between programming and personality is blurry, especially in the somewhat eccentric Artoo, Threepio and Chopper, but seeing how the two sides view and treat the trio throughout the story is interesting. While the deeper issues of droid rights and the technical definition of sentience are not touched on, nor likely to be mentioned in a show meant for a young audience, Droids in Distress does give the audience a window into how droids fare in the galaxy under the Empire, and how it might behoove some of its denizens to treat them, for good or ill.

Jay: Now wait just a moment — I think the sentience vs. tools debate is certainly very interesting (and note well that dubbing it “sentience vs. slaves” presupposes sympathy with the sentience point of view), but let’s not pretend that the Rebellion is full of empathy for droids. Far from it, in fact. Let’s just look at the actual rebels for a moment: that is, the protagonists of the original Star Wars film who fought on the side of the Rebel Alliance.

We don’t even need to discuss the Prequels, where everyone up to and including the vaunted General Kenobi treats droids as nonpersons (again, a person named Skywalker is the only exception) or the old Expanded Universe, which suggested that the Rebels participated in the standard practice of wiping droid memories every so often precisely to avoid them developing a personality. Once again, if we’re thinking of droids as sentient beings, the concept quickly turns abhorrent. The Rebels clearly aren’t thinking of them in those terms.

So while my colleague brings up the inhumanity of stormtroopers, I think he’s stretching a little with the droids. In this case, it’s the Ghost crew, the rebel Specters, who are out of step with mainstream thought. They treat droids with a humanity that the rest of the galaxy, including the future Rebel Alliance, doesn’t share. Indeed, his point might have been better taken were he to point out that stormtroopers were shocking because their faceless, nameless nature reminded him of droids: they are identified only by number, just like a droid.

The Empire may be accused of many things, but treating droids like droids is not one of them. That’s the case even if we agree with the Skywalkers that droids ought to be treated with respect and humanity, because that’s a very unusual viewpoint indeed.

One thought to “Droids: Slave or Sentient?”