Ben: Noble intentions are traditionally what differentiate the “good guys” from the “bad”. The heroes of a story are altruistic, working for the good of others, while the villains are selfish, working only for themselves. Protagonists look out for their friends, families, comrades in arms. Antagonists carve a swath through whoever stands in the way of their goals.

But this sort of binary story structure is often deconstructed with a simple scenario: a hero is placed in a position where, to do the greatest good for the largest number of people, they must do something they would not normally do. Something morally questionable, or even outright against their morals or beliefs, but something that would protect others, stop conflicts, save lives, the examples go on and on. The drama lies in how the hero deals with this sort of problem, either taking the moral high ground and living with the ultimate outcome, or doing what they deem necessary and having to live with their conscience.

When it comes to Star Wars, these sorts of dilemmas are presented, but most often bypassed entirely. Taking a third option is routine for the Jedi, especially the Skywalker family. But for those living under the Empire, having a third option is not always, well, an option. The Force is a scarce thing, and the morality of the day is often ruled by what will allow you and yours to survive for the foreseeable future. Serving the greater good is hardly a thought in the minds of most beings.

Taking the morally dubious option in favor of a greater goal is a common theme in Breaking Ranks. Ezra has to temporarily squash his new-found altruistic side and fight to reach the top of his Academy class at the expense of his classmates. Zare Leonis’ sole reason to be in the Academy is to discover the fate of his sister, a goal that drives him to the top of his class and ultimately to the Inquisitor’s side, the very being he suspects as having a hand in her disappearance. Even the Empire itself puts its treatment of the Lothal farmers in that category, turning their land into mines that bring up valuable ores necessary for the industry of the Empire.

Of course, all three of these come from different places and make their decisions for different reasons. Ezra recognizes his options whilst undercover are limited, and makes a harsh judgment call in a short-term situation to allow him to complete his mission, but makes the action right in the eyes of his classmates as soon as he can afterward. Zare recognizes the Empire’s dark side but also loves his sister too much to let her fate remain a mystery, letting everyone believe he really is an Imperial youth at heart while he works toward the day where he leaves it. And while the Empire’s mining operations are supposedly for the good of the Empire as a whole, whatever they are digging up on Lothal is both more important and more volatile than simple ores or minerals.

Having characters make the tough decisions is a hallmark of a work confident in its own narrative. The decisions Ezra and Zare make are their own, each doing what they think is right, what will do the most good for the future instead of just the present. Saying that the ends always justify the means for them is simplistic, glossing over the nuances and differences in their situations and personal outlooks. What we saw in Breaking Ranks was two young men who recognize that good endings to a story aren’t always easy to come by, and who are willing to make sacrifices (friendships, their own comfort, possibly even their lives) in the short term in order to guarantee the success of a greater long-term goal. 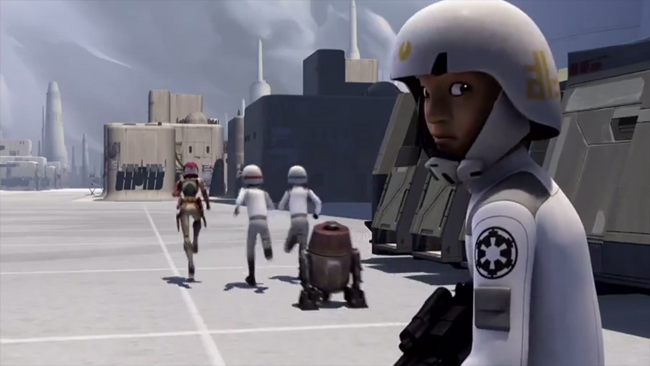 Jay: A word of caution though — the “greater good” is often the mantra of the villain and the tyrant. Ben discusses one way in which the stereotype of the noble hero and the selfish villain is deconstructed, but there’s another way: in real life and in more complex storytelling, villains often cite the nobility of their purpose in justifying their evil actions. It’s the ultimate origin of the phrase “the road to Hell is paved with good intentions.” It is absolutely worth praising a storyline that has the heroes make sacrifices or questionable decisions in order to serve an over-all or long-term good: this is a mark of good storytelling. But in good stories, there’s a fine line between that sort of thing and what a villain might do.

A well-intentioned villain might be a Thrawn or a Dooku — both of them do pretty horrible, awful things and they justify it based on the order they seek to bring to the galaxy. Even Lord Vader has similar intentions, as seen from his PT ruminations as Anakin that were hinting at his deeper thoughts on how the galaxy should be run. Some villains are unquestionably selfish: the Galactic Emperor Palpatine is the quintessential example of such, as he seeks nothing more than power for its own sake. The rest of the Imperial loyalists are unaware that the good parts of Imperial rule are but side-effects of Palpatine’s goal, and not really all that important to him. But a villain like the Emperor is probably an exception rather than the rule. Something else separates the heroes from the villains: and I think it has to be just how far they’re willing to go, and who they’re willing to sacrifice along the way. At some point principles have to matter.

I like this episode, but I would like to see a followup on similar lines. I’d like to see the heroes deciding what lines to cross, and just how far they are willing to go. Ideally this would be a Hera-centric episode, as she exemplifies the Cause for the team as seen in A New Dawn and Spark of Rebellion. And as much as Hera is the idealist, I’d like to see her grapple with it too: she can’t and shouldn’t be perfect, and her commitment to the goal of overthrowing the Empire is the perfect vehicle for showing that internal struggle between heroism and villainy.

But I’m happy with what we got for now. Ezra and Leonis got to make tough choices, but their sacrifices are for good reasons: very different from the casual selfishness that the Academy officers were trying to inculcate their future stormtroopers with.