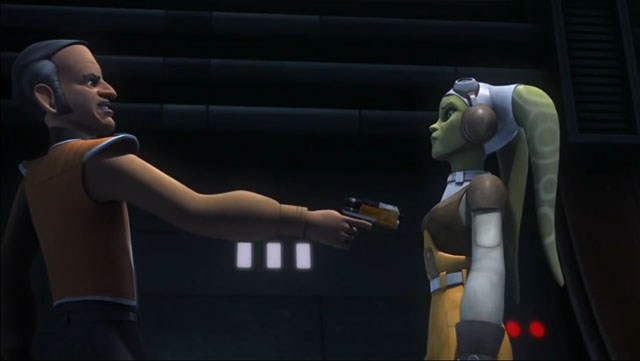 Star Wars Rebels’ cast is the show’s great strength. Every character has their own layers, depths beyond the stereotype they might be pigeonholed into if it were a different show. Nowhere is this better seen than in the relationship between Kanan and Hera and who the leader of the rebel group is. The assumption is, looking over the crew of the Ghost, that Kanan would be their leader. He is, after all, a former Jedi who has been living in the rougher part of the galaxy for years, a cunning warrior experienced in the dealings of the Rim and with the Force on his side. In practice, though, Hera is the one not only calling most of the shots, but also keeping the team from flying apart due to mistrust, differences and the simple friction of five (six counting droids) beings rooming together and constantly in each other’s faces.

Take the case of Ezra’s tutelage in the larger galaxy. Despite Kanan’s good intentions, he is still a rough and tumble man completely unaccustomed to being a teacher, much less a Jedi Master. There are times where he simply doesn’t see or know how to help Ezra with the questions he has. In those instances, Hera is usually the one to step in, as she does several times during “Vision of Hope”. She is the nurturing and encouraging maternal figure that Ezra very much lacked in his life until crewing aboard the Ghost, urging him to not give up on hope, even with setbacks like the betrayal of someone he trusted, and stepping in when an enemy tries to goad him, helping him to avoid edging toward the dark as he had at the end of “Gathering Forces”.

Hera is not just the mother figure, though. She is also a capable and cunning warrior in her own right, moving to protect Senator Trayvis with her life if need be, and seeing through his deception before he can do the team any lasting damage (aside from shattering their trust). Armed only with her little holdout blaster and whatever she can put to hand, she has taken on Imperial troopers, an ISB agent, a scout walker, fyrnocks and a crime lord, and each time come out on top. She is also far and away the best pilot in the crew, by everyone’s admission the only one able to push the Ghost to her limits. Her efforts, contacts and skills are the main reason their merry band has managed to avoid capture or death at the hands of the Empire many times over.

Within the context of the show itself, then, Hera is one of the team’s most central players, if not the central player. The other members of the crew may be flashier or more visible than she is, but Hera is the one on whom the others rely to be there to catch them when they jump from rooftops, or simply to pick them up when they fall. She is the team’s leader, the heart, the core. Without her, the team would fracture, fall apart, each member drifting off on their own or falling into Imperial hands. Within the story’s context, Hera is essential. 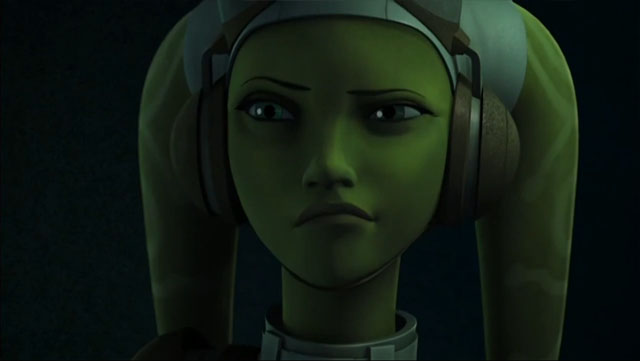 That sort of role crosses over to the out-of-universe context of the show’s marketing as well. Hera’s voice actress, Vanessa Marshall, is one of the show’s biggest proponents, a visible and forceful presence not only in official interviews and behind-the-scenes works, but also fan podcasts and even on Twitter. A lifelong fan of Star Wars, the enthusiasm and genuine affection she brings to her role and to the franchise makes her an ideal ambassador for the show and for the brand as a whole, something she’s done as far back as Star Wars Weekends last year before the show had even aired.

So, many across the internet would like to know: where is Hera? With all of this going for her, it’s an odd question to have to ask. It doesn’t relate to Hera’s presence within the show itself, rather to the show’s marketing and promotional field, especially the merchandising. While Ezra, Kanan, Zeb and even Sabine have books, toys, clothing, dinnerware and more graced with their presence, Hera’s attendance is comparatively miniscule. Sabine and Ezra have books devoted to their headspace, giving us a look at what they think of their crewmates and the events of the show as it unfolds, and Kanan has both a full-length novel and an upcoming comic giving us his history. Hera remains an enigma, mentioned but never featured, all but invisible outside the context of the show itself.

Speculation on the reason for this absence is only natural. If Twitter and Tumblr are to be believed, it’s the fault of sexism, of a bias against the show’s female fans and viewers in favor of young boys. Another view may say that Hera simply is not as visually interesting as her crewmates, lacking the striking appearance brought by Mandalorian armor or a lightsaber. Still another view is that Vanessa Marshall’s strong out of show presence and the popularity of the character likely took the marketers by surprise, and it’s only a matter of time until the merchandising machine catches up to what the tide of fan opinion is bringing in. The show’s second season push might very well bring Hera toward the forefront, but then, it might not.

Whatever the case with regard to marketing, the show itself is making its own case for how strong a character Hera is. It is unhesitating in making her the leader of the team and the captain of the Ghost, smart and perceptive, keeping the whole team together and one step ahead of the Empire. She is more than worthy of having her own fans, and deserving of her own merchandise and media presence. Here’s hoping that as time goes on, those asking #WheresHera will get a satisfying answer.