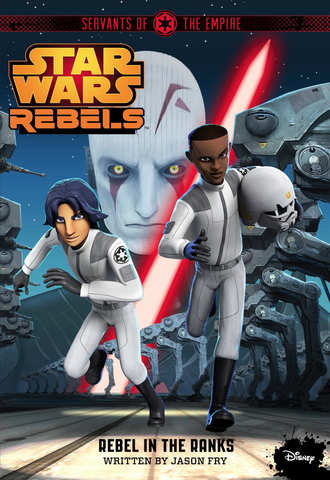 Jason Fry’s second entry in the Servants of the Empire young adult novel series takes place concurrently with the Rebels season one episode “Breaking Ranks” and his two books arguably do more to develop Lothal as an interesting place than an entire season of the still-excellent show has managed to do. If you’re still worried about the “young adult” part of that sentence, read our review of the first book in the series and have all your concerns allayed. Fry’s second book in the series continues to provide adult-like depth to the setting explored in the television show, but it also works really well as a YA novel that we would have really liked to read when we were younger.

While the first book in the series introduced the characters and the setting, this book builds on it while changing the tone enough that it doesn’t read like just a follow-up story. The first book featured themes of colonialism and adolescent sports drama that related to each other in surprising ways. By Rebel in the Ranks, the main characters have moved on to different things and the style of the storytelling changes accordingly. Yes, there are two main point of view characters now: Zare Leonis returns as a newly-minted cadet at Lothal’s Imperial Academy, while Merei Spanjaf’s role expands as we see her various undercover attempts to help Zare find out about his sister’s fate. The two characters’ different narrative arcs – and the contrast with the themes explored in the first novel – constitute the true meat of the novel, though part of the novel also overlaps with the story of “Breaking Ranks.”

Though we’re not a huge fan of novelizing television show episodes, Fry does it pretty well: the story of the novel does not play second-fiddle to the television episode, and actually serves to make the action in the episode seem a lot more interesting. As we said in our previous review, the Servants of the Empire books should be essential reading for any fan of the Rebels television show. We can now add an additional recommendation: it’s good reading for any young Star Wars fan not only because the readers might identify with the characters, but also because the audience might learn to relate to people they’ve never identified with before. It’s a book about camaraderie and teamwork, and those themes carry through from the book’s dedication to the very end. Merei Spanjaf, in particular, is a great female role model and Disney should pay attention to her!

The book’s split into two protagonists is very welcome for more reasons than just a change of pace, because Zare and Merei’s parallel stories allow the reader to explore their different contributions to the continuing development of the search for Dhara Leonis. The two protagonists function as parts of a team, each with their different roles, but indispensable to each other’s operations. Zare’s own chapters are also dedicated to teamwork, continuing the lessons he learned on the grav-ball field and adapting them to the context of Imperial service. The tough calls he made as team captain are as nothing to the choices he makes in the hyper-competitive atmosphere of the Imperial Academy.

While Zare previously had to navigate the politics of the New Order on a micro scale by defending the presence of aliens on his grav-ball team, now Zare has to confront the Imperial military apparatus. He has to become the best cadet in the service of an Empire he wants no part of, because success is the key to finding his sister. Zare has to become the best cadet without losing himself in the process, and that is where his struggle gets interesting. Helping out his fellow cadets, he argues, is effective for unit performance. He may convince some of his comrades and instructors, but Zare has to learn about the limits of teamwork. Does he give in to ambition and step on others to reach his goals? Does he lower himself to the level of those who aren’t as principled as he is? His struggles are very applicable to the adolescent reader who may be struggling with these very same questions, perhaps not with the life and death stakes that Zare faces: though we recall that the competitiveness of high school and college academics is starting to become worrisome. Adult readers may have perhaps faced these questions already, but will appreciate this sort of character conflict.

Zare also learns that prejudice runs both ways. After rejecting the Imperial indoctrination of his youth, Zare begins to see all Imperial authority figures as enemies. He learns that everything is not so simple as that – his strict Academy instructor is more well-meaning than he might have thought, while an Imperial officer actually does his best to help Zare in his quest to find his sister (unknowing of the true shenanigans Zare is up to). That officer – a Lieutenant Chiron – admits to Zare that the Empire has its faults, but that these very faults are why good men like Zare are so desperately needed. This is a good show of nuance, and we hope that this continues: perhaps eventually Zare encounters rebel insurrectionists who aren’t very nice people. Zare also initially pegs Dev – Ezra – as a troublemaker, and it’s great to see Zare’s perspective on Ezra because it matches what many viewers may have initially thought of Ezra. Zare’s views change, but it’s interesting to note that Zare repeats the standard Imperial line about Jedi being charlatans when Ezra first explains the Force to him. Some prejudices are harder to remove than others, and there’s great consonance with television show’s (and the OT’s!) portrayal of Jedi as scarcely credible legendary figures.

Beyond Teamwork – Relating to People

For instance, Zare’s partner-in-crime Merei Spanjaf is pretty different from Zare: she’s from the Core World of Corulag, her parents are part of the Imperial security apparatus, and she’s a talented hacker. Like Zare, she’s working from the inside – but in a very different way, with very different risks. Merei encounters criminals, deals with Imperial base security measures, and even plays mental chess with her parents in an attempt to learn more about circumventing Imperial security networks. Merei is not entirely clear if her parents are on to her or not, and neither is the audience.

Merei’s plot line is the more exciting one in this story, in our view. This is not only because she has to go undercover with different risks/rewards, but also because she has a different sort of challenge. She has to convince both slicers and criminals that she is worth their time to teach – as she appears very much like the sheltered scion of privilege – but beyond proving herself, she has to come to realizations why she’s underestimated and how to make up for it. She’s a very interesting character to follow because she thinks on her feet: at one point she is undercover at an Imperial base as the equivalent of a Girl Scout (pretending to sell something or other on behalf of a school she doesn’t attend) and she has to play to the expectations people might have of the disguise she’s assumed.

Zare uses his newfound empathy to learn how to deal with Ezra – as well as the bully Oleg, also seen in “Breaking Ranks” – in the same manner that Merei learns to navigate her various undercover assignments. In the academy, Zare learns how to integrate with a team and become a leader without even knowing it, while Merei’s challenges are more at the forefront. Their stories parallel as much as they differ, and show how valuable relating to people might be in different contexts with different stakes. As in the previous novel, the story continues discussing the importance of retaining individuality and continuing to question the system while grounding it in a convincing, plausible, and above all compelling narrative.

The concreteness of the story and the way the two characters complement each other in accomplishing their goal helps accomplish the last, and quite possibly most important reason why we think this novel is excellent: it not only shows the characters relating to different people, but it allows the audience to relate to them as well.

This works on several levels. At the most basic level, having two POV characters of opposite genders helps readers of either gender relate to and understand a character of a different gender. Beyond that, it also helps relate to characters of different interests and skillsets. The writer of this review was never a soldier, but reading about Zare’s struggles with teamwork, his loyalty to his comrades, and his affection for them despite the dire stakes and his disgust with the Imperial system is illuminating as it helps us understand those who were in Zare’s position. A slicer – or an IT-oriented person – is very different from a soldier, and Merei’s tasks help us understand the sometimes mysterious world of data security.

Both are relevant to contemporary readers, with the nature of modern life requiring more people to serve in the armed forces and with digital threats becoming part of our daily existence. Merei’s is a little bit more compelling to us, though, for a few reasons: firstly, the digital age means that security threats, hacking, and all those related things are parts of our daily existence. Learning about data security in a fictional world is no substitute for real life, but it is more than enough to excite someone’s interest after realizing how relevant it is to real life. Moreover, we think it is excellent that Merei is a talented female computer hacker. Just this year, various projects like Code.org and others aim to increase female presence and recognize female interests in STEM fields in general and computer programming in particular. Merei is a great character who can inspire technically interested female readers, as well as be a good example to others who somehow still think that technology is a man’s world. Role-models like this didn’t exist when we were younger, with the result that sometimes boys would think girls didn’t belong in grade school programming classes and the girls might think they didn’t belong either. Merei is a great character and examples of characters achieving their dreams in YA literature surely makes a difference with kids struggling with the same thing.

We didn’t really discuss the novel’s congruence with the Rebels episode because we didn’t see this as the most striking part of the novel, though it’s worth emphasizing again that Fry did an excellent job in both writing a story that is authentic to the feel of the show and greatly expands our appreciation for the events of “Breaking Ranks.” The real strength of Rebel in the Ranks is the way the two POV characters deal with their struggles by learning how to relate to people, and how the audience can relate to them as role models.

And seriously Disney – you partnered with Code.org to use Frozen characters to inspire girls to learn to code, you should tell them about Merei Spanjaf and get girls reading this book too!