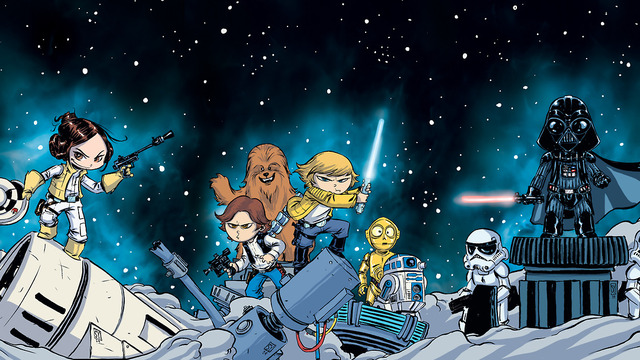 So, Padawan, you wish to acquire some Star Wars comics having heard tales of one million sales? This is not a road for the faint hearted or those unable to be flexible. You believe you are neither? Very well, let us begin.

Rule 1: Know what is coming out when

Surely this is easy? There is release data all over the internet! Indeed it is and that is the problem, how much of this data is reliable? The answer is, exceedingly little. There is but one reliable source of information for what comics are coming out for a given week and it is Diamond Comics. Diamond Comics are not a comic shop or a chain but instead are the distribution agents for all the monthly comics. It is Diamond who get the comics to the shops for you to buy, therefore it is their info that is the most reliable. (Monopoly, I hear you say? Yes they are and if we go into that this will be a multi-part article, suffice to say that that’s simply the way it is!)

Trust no others! Comic companies tend to be very bad at maintaining their website information where release dates are concerned.

But they were solicited! Oh, found those have you? Yes, Diamond requires the publishers that use their services to submit titles that they expect to publish in two months time, but this is always subject to unplanned changes. Marvel might intend to publish a SW comic on each week of a month but end up publishing one on one week, skipping the next week and then publishing two comics to catch up. Or it can become more chaotic still with an issue being delayed for a month or longer!

You might ask, how can a release date change? Easily. Publishers have printing slots that they have to make; should anything happen – people being ill say – the slot is missed and they have to wait until the next one – cue delay. Or the shorter version is: Sith happens. Which is why the reliable data is Diamond’s, but that is of a strictly short-term view.

You now know where to find accurate release information but this is not enough to ensure you will find the comics you seek at your local comic shop, should you have one.

Comics are sold to retailers on a non-returnable basis – if the comics do not sell, the retailer has lost money, therefore retailers will order only what they expect, with reasonable certainty, to sell. Given the sales levels of Marvel’s SW line to date, it is very good odds that they’ll have some copies but why gamble when you don’t have to?

(For the perspective of the local comic shop, see Brian Hibbs’ columns at CBR)

Most shops will offer what is termed a ‘pull list’, which means if you ask them to they will set aside a copy of a title for you to pick up whenever suits. It should be understood that operating a pull list with your local comic shop is akin to a contract and should be treated as such. After all, they will be ordering to cover pull list copies plus however many more they can sell; having secured your copy, you should honour the deal by purchasing. Altering the deal at very short notice is not recommended, it’s simply bad manners but you can always revise a pull list ahead of releases coming out.

Rule 4: Buy trades as soon as you can

Most comics now are $4 a time, that can easily mount up. Are trades, collections of between four to six issues in most cases, that much more cost-effective?

It depends how you acquire them. Bought at full price, there is a fractional difference between buying trades and buying monthly comics, but it can be enough. For instance Star Wars: Darth Vader Volume 1 collects the first six issues which were sold at $4 each and sells for $20 at full price. To a degree, the monthly issues subsidise the cost of the later collection. If Marvel published as straight-to-trade the price would likely be higher.

Local comic shops are small businesses. Where the likes of Amazon and its equally massive corporate rivals are concerned, they do not have the financial capacity to out-discount such leviathans. Instead, Diamond ensure the comic shops get trades about a fortnight before the big booksellers, this gives the shops a small window of competitive edge by virtue of having the items first! It is also why the release dates you see online will often be later than the dates given in solicitations.

While trades tend to be available for longer than monthly issues there is no absolute rule on how long they can stay in print for. Marvel’s policy on this is particularly mercurial. As a general rule, the same rules for comics apply to trades – know when they are coming out and then bag ‘em!

If the format of the trade you are buying is a deluxe one then you are recommended to buy online, with a big discount and get it as soon as it is out. Often a deluxe, over-sized hardback like the current Omnibus collections of Marvel’s first SW run will have a limited print run, while having an RRP of $125! The upcoming Star Wars Covers collection will be in the same over-sized hardcover format.

There is but one final lesson I would impart to you Padawan: It’s all about the money. It is up to you to decide who you wish to support, a local comic shop or an online seller. As is the format you opt for – do you want to be able to read the story now, so as to be able to discuss with others immediately or do you prefer to see what people make of it while you wait for the trade? There are no absolute answers to these questions, but voting with your wallets counts for far more than online outrage!