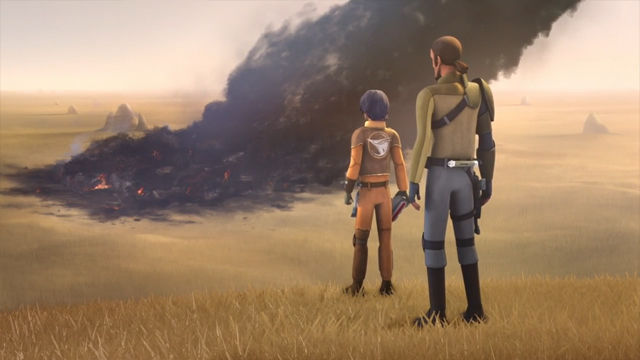 Ben: A number of TV shows, especially the successful ones, have a problem with the status quo. Once a show is established, the easiest thing to do is leave things as they are, repeating a successful formula ad nauseam until the ratings stop coming in. This is especially true about typical kid’s cartoons, where the stakes are microscopically low and conflict is played for laughs. A list of examples would take up most of this page. But right from the beginning of Season Two, Star Wars Rebels proves that it is not one of those shows.

“Siege of Lothal” is an intense and dramatic story about the consequences of the actions taken and done through the show’s first season. The heroes thought that they had won, if not a war, at least a very great battle. They had defeated Grand Moff Tarkin, destroyed his flagship, saved Kanan’s life and united with a larger rebellion than any of them had known even existed. But the realities of what little good their action had actually done, how little they had accomplished, came crashing back down on them throughout the events of the hour-long season opener.

How willing Rebels is to shake up and alter its own status quo has been subtly working its way through the first season, with neither characters nor plots staying stagnant. But there has not been a point where more has changed in such a short time as this two-parter. The foremost agent of these changes is, of course, Darth Vader, a foe far above and beyond anything that the Ghost’s crew has ever faced. He wipes out their allies, destroys their hiding places, and sends them on the run to somewhere, anywhere that is not Lothal. There is nothing they can do to stop him, or even slow him down, they can only run for their lives and hope that he does not follow.

All of a sudden, they are not merely resisting the Empire and helping the oppressed through robberies or hijacking convoys, they are fighting side-by-side with pilots and soldiers in an ever-widening war.

Actions have consequences. Everything they had done to that point had given them gains, advanced the story, and made our heroes look untouchable. And it all came crashing down around them, piece by piece, only just allowing them to escape with their lives from events that were inevitable results of the very actions they were taking. This is a very real, very dramatic and very daring way to make sure that the show continues to tell a good story instead of relying on the same tropes week in and week out.

It takes some big brass ones to have the heroes of a show ostensibly meant for kids be rendered powerless, to show them being hurt, in real fear of pain, or have them be permanently scarred. Only a handful of animated shows within the past few years have done so. The Clone Wars did it, when they were not prevented from doing so by the restrictions of established canon. Avatar: The Last Airbender, a show with a similar projected three-act structure, did it even more, with their biggest shakeup coming at the end of their second season. Rebels did it at the beginning of their second season, launching the show into a new phase right out of the gate.

They set up a cast, giving them a family dynamic and giving the audience a basis of familiarity with them. We know the characters, we know how they think, how they fight and how they feel. And now, they are going to start shaking that up. A family is still made of people, and people all have their own foibles, their own neuroses, their own challenges and ways to grow. The team may stay together, or the trials they undergo may tear them apart. Not on a kid’s show, you might say, that would never happen. But that’s why what Rebels has done is so impressive. In this kid’s show, it just might.

This is the Empire Strikes Back era of the show. There is, as Ezra says, no going back. 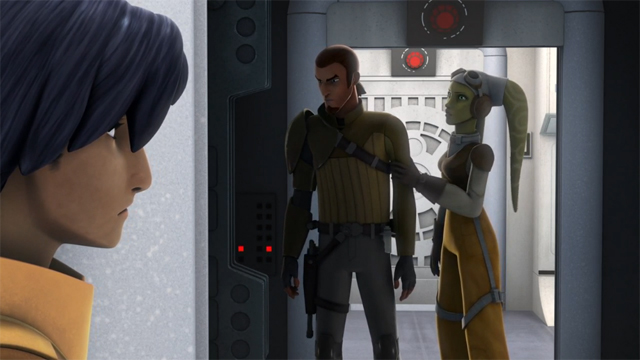 Jay: The writers and viewers have used the Empire Strikes Back comparison for very good reasons. As Ben mentioned, the stakes have now been raised and the consequences of their first victories are becoming clear: the Inquisitor said that there were some fates worse than death, and I choose to believe he meant Vader’s intervention. Vader’s presence changes everything, our happy-go-lucky heroes are shivering with fear and their acrobatic Jedi heroics are stopped dead cold by Vader’s efficient cuts (both physical and mental). But it’s not just the increased Imperial attention and the utterly terrifying presence of Darth Vader that makes the ESB comparison a potent one. There are other consequences too.

One of the things ESB did was take a relatively straightforward adventurous hero’s journey and complicate it immensely. “The Siege of Lothal” has done the same thing. The Ghost crew is part of a team now, and that carries extra costs with it. This TV movie was filled with great scenes from beginning to end, but the shock and awe of Vader taking everyone down doesn’t eclipse the other great scenes. The discussions between Kanan and Hera are poignant, and the Han and Leia comparisons were very intentional. But unlike Han, Kanan doesn’t have misgivings because he’s a loner: he has misgivings because he remembers what happened the last time the Jedi were part of a military organization. Consequences, you see, carry very far indeed. It’s no accident that the Kanan comic series got started when it did.

These things matter, of course. Who the Ghost crew associates with is important not only for their own self-image (whether as Robin Hood types or revolutionaries), but also for the success of their mission. The threat of Vader wasn’t the only thing that pushed them off of Lothal: they demonstrated last season that they were a different sort of rebellion, one that could inspire others to fight and rise up as well. Vader understood this, and engineered a way to discredit the rebels before all of Lothal. The consequences of last season’s triumphs: the war has taken on a new dimension, and raiding supply caches won’t cut it anymore. If they want to win hearts and minds, they have to beware Imperial attempts to fight them on that front too.

There were consequences for Minister Tua as well. I was disappointed that she was killed, but I like that Tua was actually given a full character arc. She started out as an idealistic believer, who was somewhat contemptuous of her rural Lothal compatriots and sided with the Empire on most things. She worked well enough with Kallus, was discomfited by the Inquisitor, and was outright horrified by Tarkin. An idealist, her image of herself as the civilized Imperial government administrator could not keep up with the demands Vader and Tarkin placed on her. She was a good, if misguided person, and the people of Lothal knew it. But the consequences of her character growth and inability to commit fully to the Empire led to her death as a tool of Vader’s propaganda.

This is just the start. I expect other seeds from last season to sprout as well — I imagine this season we might learn something about Sabine’s Mandalorian background or at least her time at the Imperial Academy. Hera — excuse me, “General Hera” (I love that) — will doubtless continue to stay at the fore, as association with a larger rebellion is something she’s always been looking for because she’s the true believer of the crew, as well as its leader. And I don’t think I need to say anything about the consequences of Ahsoka’s relationship to Anakin and earlier departure from the Jedi.

The Empire Strikes Back took concepts mentioned in ANH and developed them in a way that added real complexity to the Star Wars saga, from Han’s debt to Jabba to Luke’s parentage. The storytelling has just taken a large step up, and it will reward close attention. It’s not just dark for a “kid’s show,” it’s nuanced and textured too. If the rest of the season is half as good as the movie (or half as good as the second season of Avatar, as Ben appropriately referenced) then we’re in for a treat.

One thought to “Consequences – The Fate of Those Who Rebel”