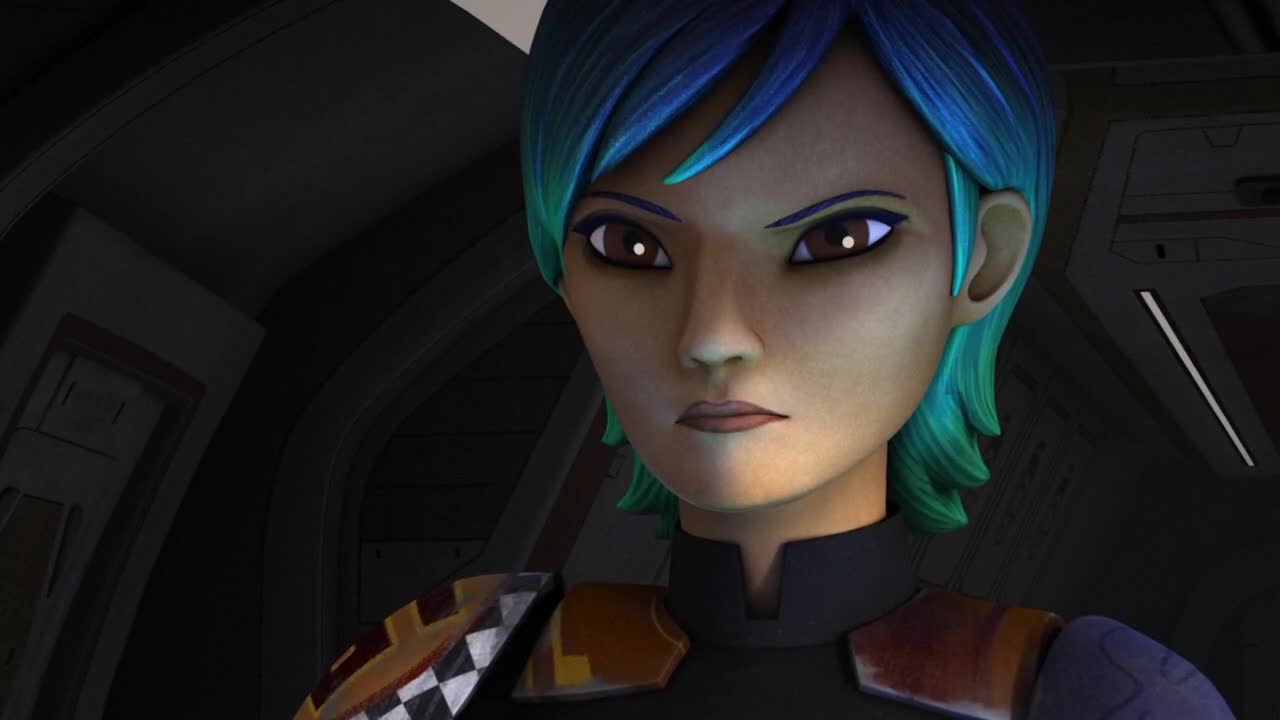 Ben: Star Wars Rebels‘ cast is full of larger than life, colorful characters that all fit broad stereotypes: Zeb’s the bruiser, Hera’s the team mom, Ezra’s the snotty kid, etc. There is, however, a layer of nuance that makes them special and standout characters in their own right. Zeb has a great tactical mind, Hera longs and loves to fly, and Ezra is steadily growing into a worthy Jedi apprentice. But there is one character for whom the nuance is even more obscured than the others. I’m talking, of course, about our favorite young Mandalorian, Sabine Wren.

Sabine has been largely an enigma since her first appearance, with only bits and hints as to her past and her own reasons for fighting against the Empire. “Blood Sisters” opened that door up just a bit wider, but not a whole lot. We got some more information, like that Sabine was once a bounty hunter but didn’t stay one for very long, and that her friend Ketsu helped her break out of the Imperial Academy on Mandalore, but we really didn’t learn much more about the girl herself.

And here’s the rub: that’s not a bad thing.

Sabine is a character with a lot of potential. She’s a Mandalorian, a former Imperial cadet, an artist, an explosives and weapons expert, and an ex-bounty hunter. There are all sorts of fascinating stories that can be told about her, around her and with her, from her past and into her future. The fact that we, until now, haven’t gotten any stories that revolve around her is a bit vexing for those (like me) who want to see some of that potential get realized. There’s nothing more frustrating that seeing a character with wasted potential. But, as backwards as it may seem, in a lot of ways it’s actually better for the character to tease things out.

Stories don’t have to be dumped in our laps all at once. Not everyone on Rebels is Kanan and will rate their own comic book and novel. Sabine certainly has that sort of potential, but she’s also younger than Kanan and doesn’t have the vault of experiences that he does to draw from. Once we learn the story of how she escaped from the Academy, that story is done being told. But so long as things remain nebulous, with pieces still moving, we can learn more about Sabine’s character and her decisions through less direct means. 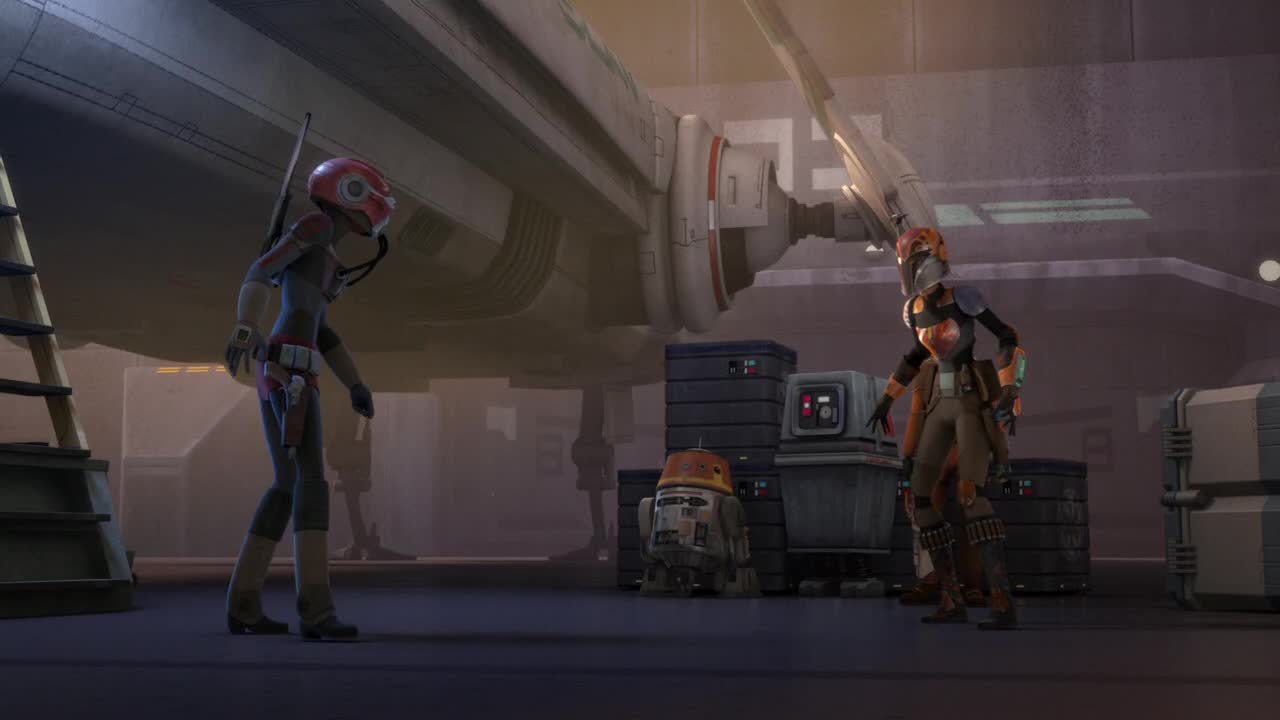 If we had learned previously that Sabine’s escape from the Empire had been a solo effort and she had jumped straight into the Ghost upon leaving, opportunities for storytelling would have been closed off before they ever had a chance to open up. With Ketsu, a hitherto unknown character, coming out of Sabine’s past unexpectedly, it opens up more of those opportunities to explore. Not nailing down the exact circumstances and happenstances of these events greatly benefited not only Sabine’s character, but also the storytelling of the show as a whole.

There’s something about Star Wars stories that lead a lot of people to want to know everything as soon as possible. Let’s call it the Wookieepedia drive. Whether it’s a new character, a new planet, or a new anything, there is no room for mystery, not when every character in the Mos Eisley cantina has their own story. Raw data and facts about something take the place of any sort of ambiguity, and the less we know about something, the less it can be referenced and cataloged into the sacred canon.

But facts don’t equal good storytelling. Not knowing everything about Sabine is perfectly fine. In fact, it’s preferable. The less we know for sure, the better. That leaves a lot more room for future things to come up unexpectedly, for expansion and entertainment. We know more about Sabine than we did, and we’ll likely learn more before this half of the season is up. But there’s still a lot to learn, and a lot of room for more stories. Some of it might be told on Rebels, some of it might not ever be told. But there’s nothing wrong with a bit of ambiguity until the time comes. 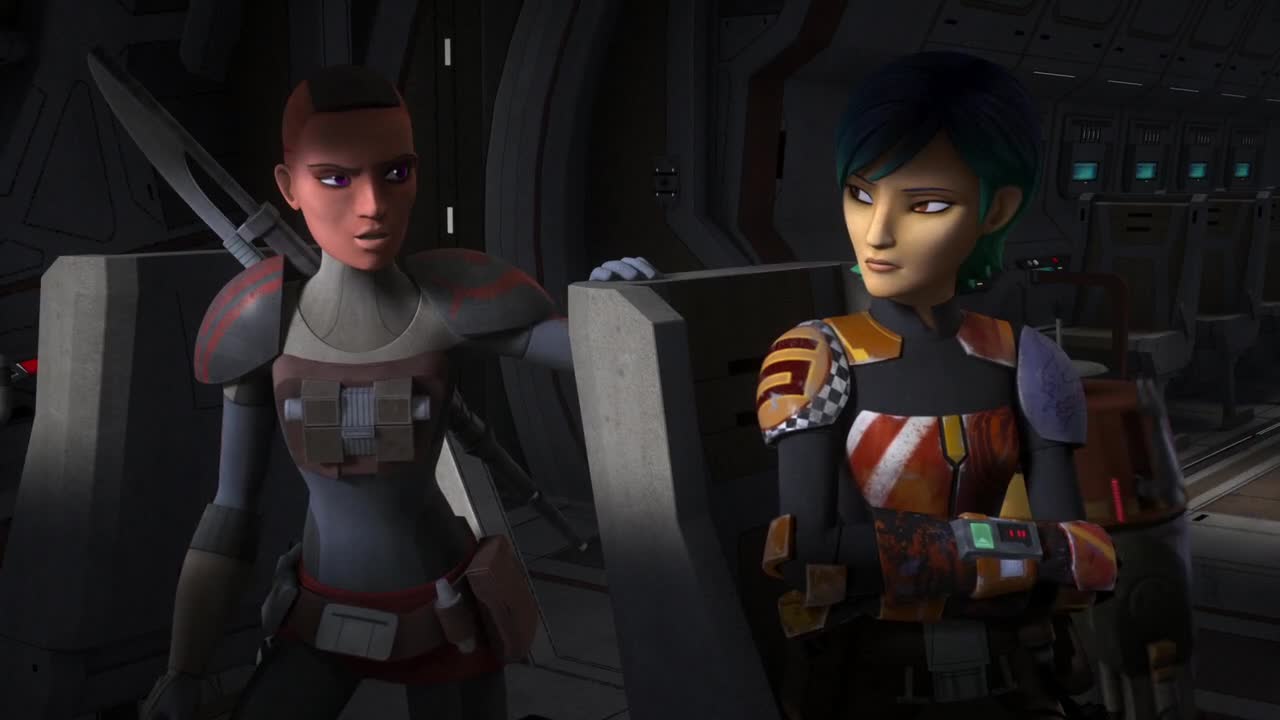 Jay: That said, it’s about time we got to see Sabine lead an episode. We basically had a Sabine/Hera episode in season one, and then a Sabine episode this season. I could write at length about why we need more Hera, as she’s my favorite, but we definitely need more Sabine. Supposedly Filoni’s commented that we’ll see as much of Sabine as we do of Ezra this season, and I hope that’s true because we need to. It’s not just that I wish for other characters to be developed — I do — but Sabine is just as important as Ezra in the story. She’s the other young character, the other entry-point for this show’s young audience to identify with.

I hope I don’t need to explain this one. The incredible resonance Sabine has among kids is very heartwarming to see: girls have really identified with Sabine and we see a lot of girls dressing up as her at conventions and the like. This is pretty important for multiple reasons. As with Ahsoka, she’s a way for girls to identify with Star Wars and see themselves in this universe. She’s a very different character from Ahsoka though — she’s an equally capable fighter and equally self-confident, but she’s more independent, somewhat silent and broody, and she’s brimming with creativity and self-expression. There’s been a lot of talk about how characters shouldn’t hold the burden of representing an entire gender in media, and it’s true. There are a lot of differences between people, and they’re worth celebrating. Perhaps a kid might identify more with Ahsoka or more with Sabine. They both have qualities that should be highlighted. And of course there’s the diversity point, but others have spoken on the matter better than I ever could.

None of this is news to Filoni or the Rebels team. I think they’re wonderfully aware of all this, which is why we have such excellent characters in the first place. I also think that Ben is largely right about preserving a sense of mystery for the character and letting things develop over time, essentially learning more about Sabine as the others do. It suits such a secretive character to have a secretive arc. But I just wanted to point out that Sabine Wren is a valuable character in the show and I hope she gets to headline more episodes moving forward (and judging from the trailers, it looks like she will). I have confidence in the Rebels team going forward, and I have a lot of praise for their character design decisions.

One thought to “Rebels Revisited: Who is Sabine Wren?”