Jay: Force visions are interesting — like the characters, the audience wonders if they depict literal truth. This was a thought-provoking episode, not least because folks were immediately wondering what exactly happened in those visions. Rebels Recon basically told us that Yoda had sent those visions to the characters, but the discussion of what actually happened isn’t nearly as interesting as what the visions mean. And just as each character got a different vision, I suspect each of us have our own take on what those visions meant.

What actually, canonically happened is therefore a lot less interesting than what the visions mean for characters and for us. I find it most interesting to see these Force visions as externalizations of the character’s inward struggles. As metaphors.

Kanan gives name to his fears and he defeats them by realizing that he can’t control everything, he can only be responsible for himself and do the best that he can do. As a result, he passes the test and becomes a Jedi Knight. Is he an actual Jedi? I hope not for saga reasons, but let’s play with that idea a little bit.

There are two ways to take it, as I see it: I. Kanan’s metaphorically knighted himself, by defeating his mental demons and passing a trial. The knighthood is less an actual, specific badge he can wear and more a sign that he trusts himself and he is able and willing to commit to being as good as Jedi teacher as he possibly can. It’s the parallel of his external struggle with the Grandpau’an — but he defeats his mental blocks. II. Kanan is an actual Jedi Knight, again, through facing a mental trial because the Jedi trials mean more than just defeating a Sith Lord, and there are various ways in which a Jedi might achieve knighthood including self-mastery. While I don’t really want Kanan to be a literal knight, I think II. is interesting because it could mean that there are other approaches for Jedi — how would a Jedi Healer pass his trials, or how would a Jedi Diplomat pass hers? It makes a degree of sense — Jedi Trials are situational and circumstantial, and tailored to who and what a person is. Hey, I may have just talked myself into being okay with this. Dammit.

Ezra, then, communes with Yoda. Or “Yoda”. But I prefer to think of it as Ezra talking to his conscience, or perhaps some manifestation of the Force. Yoda’s Socratic questions become very interesting — I think back to Yoda’s first appearance, where he asks Ezra if revenge is what Jedi stand for. I think this is something Ezra already knows, so he’s subconsciously asking himself. Now, we know there’s Force influence at work here — the name of Malachor does appear, after all. But that’s what a Force vision is, part knowing one’s self and part receiving inspiration or knowledge from the Force. I think the difference in setting here is interesting too — while Kanan was in a Jedi dojo confronting his insecurities, Ezra was in space pondering the more cosmic question of what it is to be a Jedi? He elected to take the low road rather than the higher, ætherial road. I’m sure the similarities to the last arc of Book 2 of The Last Airbender weren’t lost on anybody, and I see so many echoes of ATLA in this episode. (The Temple really does remind me of the Library of Wan Shi Tong).

Finally, we have Ahsoka. We can take this as confirmation that Ahsoka knew the truth about Vader from the get-go, or at least it’s sufficient for me since I thought that anyway. And of course, Ahsoka confronts her denial and is forced to face the truth. But what’s far more interesting to me is the end. If we follow the idea that the visions represent externalizations of the characters’ internal thoughts, I love love love the little Yoda wave to her at the end. Think about it — Ahsoka was awkward about entering the temple, saying she couldn’t take part in the ritual. You got the sense that her departure from the Order had some still unresolved issues. But whether it was Yoda actually waving to her (which would be rather sweet) or Ahsoka generating it, it’s a sign that Ahsoka is coming to terms with her departure from the Jedi. She may not be a Jedi any longer, but she still has her fond memories of those days. She spoke fondly of both Anakin and Yoda, after all. Whatever happens to poor Ahsoka, it’s nice to know she has some sense of peace and welcome amongst all the turmoil.

So yeah. I think the visions are far more interesting as metaphors and character studies, because there’s a lot more to chew on and think about than “Yoda is testing them.” Now, if that turns out to be the official answer: I. we can still interpret however we wish since it’s not really stated on the show and II. even if we stick with that line of reasoning, our interpretations (mine or anyone else’s) can still apply to the Yoda test scenario. So either way we cut it, the episode’s true strength is what it reveals about these characters and even though I’m not a fan of Kanan/Ezra episodes and Forcey stuff, it’s great in that regard.

Also regardless, I do definitely want to give a shout-out to the art design and music, because they really made this episode work. Loved the vibe, even if I’m still pining for my space politics. 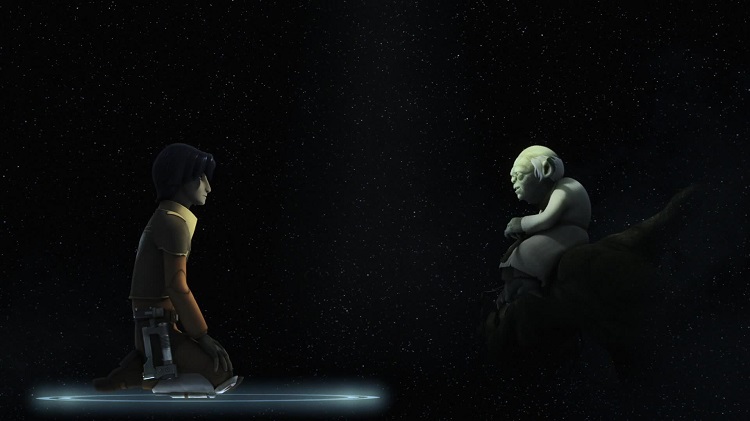 Ben: Having all three of our main Force-sensitive characters undergo radically different trials is a very interesting dynamic. Until now, only Ezra has been given any sort of vision so far as we’ve seen, and the three separate visions we got not only provided great character insight but also terrific foreshadowing for what’s to come.

I’ll go in reverse order to what Jay did and analyze Ahsoka’s first. Her vision was the most simple, certainly, and has a lot to do with her status in the Rebels era as an ex-Jedi. Her vision is a very personal one, following up the despondent look she had on her face earlier in the episode as she was watching Anakin teach lightsaber techniques via the holocron. Anakin admonishes her for the choices she made so long ago, and taunts her with the knowledge that if she were still around, she might have prevented his ultimate fate.

Here’s a radical theory: What she sees and what she hears may not be much of a vision at all, because it isn’t telling her anything she doesn’t already know, or at least suspect. It may simply be the Force manifesting the underlying pain and regret that she feels with the terrible knowledge she carries. After all, isn’t that the lesson that Yoda teaches to Luke in Empire Strikes Back? That what lies in the cave is only what he takes in with him? Ahsoka seems to be calm and in control most of the time, but as this episode makes very clear, she’s a mess of conflict and emotions underneath that veneer.

Next up, working my way backward, is Ezra. He meets Yoda “in person” this time, and Yoda tries to instill in him the sort of lesson he will try (and likewise fail) to teach Luke: that being a Jedi isn’t about fighting. What he would instruct Ezra to do if he were a more willing student is a mystery, because Ezra is the same reckless and brave soul he’s been through most of the show’s run. His determination to use his newfound power to help his friends means, in his mind, that he has to fight the Empire.

Which Yoda knows, and we know, won’t work. The Empire is too strong, and any fight Ezra gets into with them is one that he will ultimately lose. Ezra hasn’t been humbled by defeat and war the way Yoda and Kanan have, and his determination to fight and refusal to look for any other solution to the problem will only lead him to tragedy. Yoda’s cryptic hint, pointing Ezra to Malachor, seems reluctant at best. He knows what might lie ahead for the promising young Jedi, something Ezra can’t (or won’t) see.

And last but not least, we have Kanan’s vision, wherein he speaks with a guard from the Jedi Temple, whom we realize at the end of his vision is actually the Grand Inquisitor. Now, the specifics of how this vision manifests are interesting but, as Jay noted above, they aren’t really relevant to what we’re talking about here, which is what this vision teaches us about Kanan and what it teaches Kanan about himself. Kanan is confronted with a possibility that he acknowledges, but hasn’t truly faced: Ezra being captured by the Empire and ultimately being turned to the dark side like the Inquisitors.

Kanan, at first, fights and struggles against this possibility, trying to protect Ezra the same way that Ezra seeks to fight the Empire itself: direct confrontation and attack. But when Kanan is forced to move to defense with multiple lightsabers, and finds himself holding a red lightsaber instead of his own blue one, he begins to realize that he can’t protect Ezra forever. Instead of fighting, he surrenders to his fate and vows to teach Ezra as best he can and leave the boy’s fate in his own hands. He trusts in the Force. How far he’s come from the brash, hard-drinking cowboy with a lightsaber we were introduced to in A New Dawn and the opening of Rebels.

I don’t know if anyone “failed” their vision or test necessarily, but Kanan clearly came out looking better than Ahsoka and Ezra. But that’s because he’s started to find his own inner peace and purpose, to restore his identity as a Jedi. Ahsoka is unwilling to do the same, and Ezra is still learning what being a Jedi actually means. The whole purpose of this episode was to help clue us in to what the status of the three Jedi (or ex-Jedi) are, before things start to kick off in earnest toward the season finale. We’re setting up the dominoes, and pretty soon it’ll be time to watch them fall.