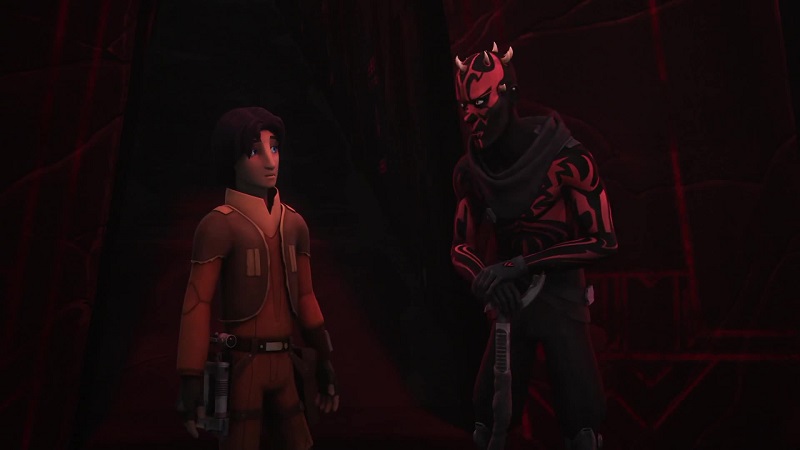 Mike: With everything that went down on Wednesday’s Star Wars Rebels season finale, I wanted us to have an opportunity to get a few more thoughts in without feeling rushed. So consider this part two of Friday’s piece—what did you think, Jay? Will Kanan remain blind, or get super-cool laser eyes? Is Ahsoka dead, alive and well, or a bird? As I’m writing this, Pablo Hidalgo is doing a poll on Twitter that puts an interesting spin on the question—does Vader think she’s dead? Personally, I have a hard time seeing him abandoning the fight unless he’s convinced it’s truly over. Like Filoni has said in interviews for a while now, she represents everything he gave up to become what he is now, and he won’t just let that be; especially after she stared him down like that.

Something else I’ve been thinking about is the notion that Ezra was too gullible for trusting Maul as long as he did. Aside from the fact that Ezra has never been the king of sensible ideas (and that he never completely trusts him), I think fandom tends to lean too hard on the idea that Darth Maul looks to people in the Galaxy Far, Far Away the way he does to us. Here on Earth, if you’re in a dark alley and you come upon a guy covered in red and black with horns on his head your mind is going to jump right to all sorts of evil religious imagery that just doesn’t exist in Star Wars—hell, Maul isn’t even the most devil-looking species out there.

Completely vital to the premise of GFFA culture is the idea that a human being could walk into the Mos Eisley cantina or Maz Kanata’s castle and not find anything particularly terrifying about it—rather, these are the kinds of beings you see around all the time. Maul’s tattoos may differentiate him from the average Zabrak, but are they so unusual as to scream “villain”? What about Savage Opress–he has basically the same look, but does replacing the red with yellow make him seem less evil? And if you’re automatically scared of Savage it doesn’t seem like much of a jump to saying that all Zabraks just look evil—which in a GFFA context would be racist for sure, but really, just seems implausible when there are so many nuttier-looking things walking around. 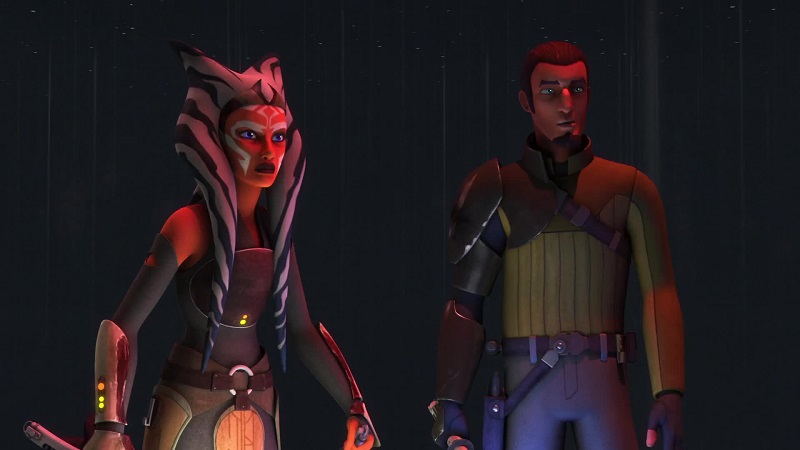 Jay: I found it hard to think of anything that didn’t immediately relate back to the last ten minutes of the episode. Despite occupying so little time and being relatively on the periphery of the story, the Vader/Ahsoka confrontation completely overshadowed the rest of the finale in my mind. Here, finally, I got to see Vader really go all-out in a fight (something I’d wanted to see since I was a kid, and certainly since the prequels when everyone suggested that the saber duelists in the OT were old men, cripples, or an untrained kid). More than the tempo of a truly masterful OT-style duelist and the struggle of his student to keep herself alive, these final scenes played out an emotional journey that in some ways resonated on the same playing field as the emotion of ROTJ. Who’d have thought that was possible? I could go on and on about those last ten minutes — a whole piece’s worth. So could most viewers, I’d wager.

But I get to thinking, that’s exactly why it worked so well. It wasn’t belabored, but it had just hit all the right notes in the music, visuals, and dialogue. Filoni knew that to play it out any longer was to risk watering it down — and he knew that to put any more emphasis was to risk drowning out the rest of the finale. Because look, I’m already focusing on that ending to the exclusion of anything else. And that’s something, because I’m always saying “less Jedi please, more secular Rebels! Less Kanan and Ezra, more Hera and Sabine!” And while it’s still Kanan/Ezra that I’m not as interested in, my sheer interest in Vader and Ahsoka drowned out my usual preferences for this show as a small-scale adventure story that interfaces with the ongoing origin story of the soon-to-be Rebel Alliance.

So how will this play out? Well, I’m sure Vader thinks she’s dead. He barely survived, and he probably imagined that she didn’t make it out at all. If he didn’t, he’ll be right back there. He’s relentless. Ahsoka? Probably dead — the whole Temple was designed using mythological underworld metaphors, and we see her walking down into it. But who knows? I think in both cases though, Vader and Ahsoka were also walking off the stage — I doubt we’ll see either on the show again.

If I could describe this episode in a single word, it’d be consequential. I’ve spent considerable time now on the consequences for Vader and Ahsoka, but there are consequences for Kanan and Ezra too. Kanan’s blind, and will have to deal with that — become more in tune with the Force than he’s ever been. Ezra? Maul planted many seeds. And whether it’s because Ezra is dumb (yes) or because Ezra is vulnerable to manipulation (yes) or because he’s gone through recent emotional turmoil (yes) or because he’s impatient and desirous of action (yes) or because he’s never truly taken to Jedi serenity training (yes), Maul got to him. He manipulated him startlingly well, and if it was far less adept than Palpatine, Ezra was also a far easier target. We’ve already seen a consequence: Ezra can open the holocron. I imagine it’ll take some time yet for the holocron to sink its teeth into him, so don’t expect the season to open with dark Ezra. But I think we can expect consequences to play out.

Nothing happened in this episode that will just be swept under the rug next season. Just as their shenanigans on Lothal in the first season caused a complete change in their operations this season, the emotional and character moments for all the characters — Sabine and Ketsu/the Mandos; Hera and her father; Chopper and AP-5; Zeb, Kallus, and the Lasat heritage; Kanan’s blindness; and Ezra’s growing darkness will all play a role next season. I’m sure of it.

4 thoughts to “Rebels Revisited: For a Few Rebels More”