Star Wars Rebels presents us with a look at two Jedi with similar pasts—Kanan and Ahsoka were both separated from the Jedi Order at the end of the Clone Wars, both spent their lives on the run, and both encountered a Sith Lord on Malachor—but entirely different futures. At the end of Rebels season two, we find the two Jedi on opposite ends of the spectrum: Ahsoka, after a duel with Darth Vader, walks away from everything; on the other hand, Kanan embraces the Force fully after a duel with Maul. What separates these two Jedi, and what of their pasts helped move them to embrace, or completely renounce, their Jedi pasts?

The two Jedi had similar experiences in the Order, like their initial struggles to find acceptance, their histories with troubled masters, and their earth-shattering expulsions from the Jedi Order. Ahsoka, at her first mission, the Battle of Christophsis, was not greeted warmly. Obi-Wan met her expecting her to be his apprentice, but was almost rejected by Anakin when it was revealed that she was assigned to him rather than to Kenobi. Under Anakin’s tutelage, Ahsoka took on a lot of the characteristics of her master. Toward the end of the Clone Wars, Ahsoka was framed for the murder of Jedi, clones, and civilians, and was put on trial by both the Jedi and the Republic. Because everything she knew turned against her, Ahsoka fled from the Order. Despite moving away from the Order, Ahsoka seemed to walk toward any path she found where she could help someone: she was instrumental in founding the Rebellion, she helped the crew of the Ghost find missions and help people, and she fought Inquisitors.

On the other hand, you have young and brash Caleb Dume. His master, Depa Billaba, was highly troubled after an encounter with General Grievous, who wiped out ninety percent of her forces. Caleb struggled to find a place in the Order, being known as highly inquisitive and almost disruptive at times. Caleb felt at home in the war and felt like he belonged on the battlefield more than he belonged anywhere else. Depa taught out of her brokenness, and used her experiences as a way to guide young Caleb. At the onset of Order 66, Caleb was forced to literally run from the Order to survive. Caleb kept running, took on the name Kanan Jarrus, and tried his best to avoid connections that could grow into meaningful relationships. For years, he ran. He continued to run until he was stuck: Hera helped him turn his running into something beneficial. Finding Ezra forced him to return, ultimately, to the Order and rely on the Force again completely. In a highly symbolic move, Kanan donned a mask of a Temple Guard, reversing the order that the Grand Inquisitor moved in: Kanan evolved from someone running from the Jedi to someone who fought to keep all of their ideals alive.

So what’s the difference? Why, and how, did Kanan, who ran from the Force his entire life, completely take on the role of a Jedi on Malachor while Ahsoka, who spent her time running toward danger, ended up leaving everything behind? Maybe the answer was told to us in a vision. Both Ahsoka and Kanan encountered strong visions in places highly attuned to the Force and both visions gave the Jedi dire warnings.

On the planet Mortis, a planet that according to the apparition of Qui-Gon Jinn is both an amplifier of the Force and a magnet calling Force users, Ahsoka encounters a visionary version of herself. This vision shows her what she’ll look like in the future: the same outfit, the same lightsabers, the same ways of speaking, except an older body. This future version of herself warns her: there is a wildness about her and seeds of the dark side have been planted in her by Anakin. Ahsoka is enraged, and starts to explain aspects of Anakin: “passionate, impulsive…” and she seems to catch herself, “BUT, I trust him with my life!” “There are many contradictions in you…and in him” says future Ahsoka. We cut to young Ahsoka, with a reflection of fire in her eyes, before future Ahsoka says, “You may never see your future if you remain his student!” 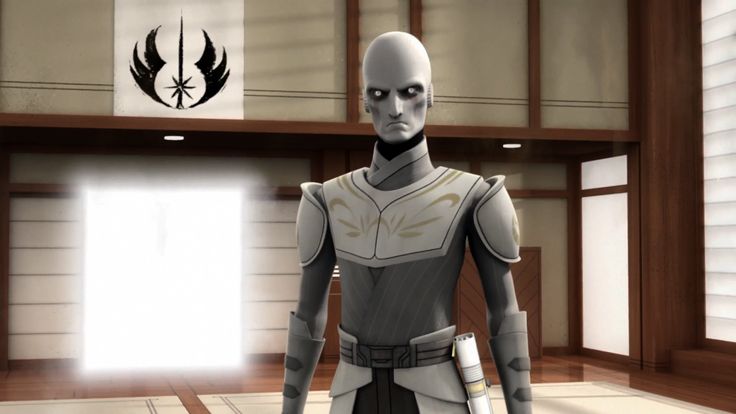 On the planet Lothal, deep within a Jedi Temple, Kanan encounters a vision of his own. Kanan tells the Guard that he is looking for answers about how to defeat Vader and the Inquisitors. The Guard gives the same warning to Kanan that Yoda gave Ezra: trying to fight will mean failure, the destruction of the Rebellion, death for Kanan, and the fall of Ezra to the dark side. Kanan and the Temple Guard begin to duel, where the Guard gains the upper hand, lamenting Kanan’s dearth of knowledge. Kanan thinks that he knows enough to keep Ezra out of danger, but the Guard has different ideas. Kanan throws his saber and backs into a wall to grab another lightsaber, and interestingly enough, Kanan grabs a red lightsaber. After fighting back the first Guard, and two more who join the fight, Kanan is backed into a corner. The Guard tells Kanan that the Inquisitors are here for Ezra and that Kanan won’t be able to protect them. Kanan agrees and shuts off both of his lightsabers. In acknowledging that he cannot fight, Kanan is knighted by the Temple Guard who turns out to be an avatar of the Grand Inquisitor from season one.

The hard part about imagining Ahsoka walking away from the Order and the fledgling Rebellion is that it seems entirely out of context for her character. How did a character who ran headfirst into conflict, like saving enslaved Jedi from Trandoshans, fighting Grievous to save younglings, and bringing a full droid factory down on herself, walk away? I think the vision influenced her decisions both on Coruscant and on Malachor (notice that both of these take place in temples). After being chased by the Order, teaming up with Ventress, and facing disbelief from both the Order and the Republic, Ahsoka knew no other options. Only Anakin trusted her, but I wonder if she remembered what would happen if she clung too tightly to Anakin? And on Malachor, she was again forced to face the darkness in her: when finally reunited with her master, she renounced her Jedi history again. Instead of trying to find the light in Vader, Ahsoka simply gives up. The darkness rears its head again: not until Luke will Vader find somebody who believes in him. But she was his closest friend, how could she give up so easily? I maintain that this was the darkness she was warned about on Mortis. Maybe, in the end, Ahsoka realized that she, too, had “too much Vader” in her, and to continue on her current path would only bring her over to the dark side.

On the other hand, maybe Kanan learned from his vision that the only way for him to help Ezra was to own and repent for his darkness and continue to teach Ezra out of a state of humility. Kanan had brushed the dark side before on Mygeeto dueling a Kage ninja, but he was quick to find the darkness and turn away from it. Maybe the vision showed Kanan that, yes, he had grappled with darkness before, but he couldn’t run from it anymore. If he continued to run, he would lose and Ezra would come into serious danger. Being struck blind makes Kanan realize that his future is with the Jedi: without his sight, Kanan finally sees the danger that Maul poses to Ezra. I think Kanan, watching Ezra and Maul interact, finally understands how much danger young, susceptible Ezra is really in. He accepts that he will only be able to help Ezra as much as Kanan is able to teach him, so Kanan jumps, finally, head first into his role as Jedi.

Understanding that the Force visions could have influenced Ahsoka and Kanan more than we know. Though it’s confusing to think that Ahsoka would walk away from the Jedi Order despite her bright character and moral goodness, and to think that she might do it twice (providing that she survived on Malachor), it might be key to unravel the mystery of her vision like she must have at one point. She might have realized that she was influenced by Vader too much to continue down her path, as her future self warned her. The Grand Inquisitor’s warning to Kanan about Ezra might have set both Kanan and Ezra on the right path, forcing Kanan to accept his Jedi identity, which might be a bright, new hope for Ezra down the line.