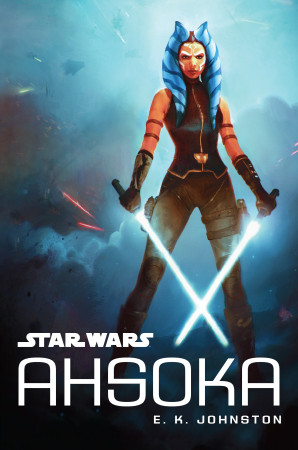 The chatter around Ahsoka has been very interesting, and expectations are high for a novel about a popular character who exited two TV series with fans clamoring for more. We’ve seen folks wonder if the novel will bridge the whole 15 years between The Clone Wars and Star Wars Rebels, or whether the novel will address issues like Ahsoka’s romantic inclinations or position on the Force’s duality (or lack thereof). Folks have wondered whether the novel would revive yet-to-be-made episode arcs from the cancelled TCW. We’ve even seen people wondering if Ahsoka will have something for readers uninterested in Ahsoka as a character. These are interesting questions and interesting expectations, but they’re to be expected when the star of the novel is no less a figure than the apprentice of Anakin Skywalker and a survivor of a galaxy-shattering conflict. Folks might come to expect a story on as large a canvas as The Clone Wars, with stakes just as high. That’s what the character Ahsoka deserves, right?

Ahsoka certainly deserves a story worthy of her, but it’s not just for her character’s stature in the universe. It’s what she means and represents to people. That’s what turned us around on a character we initially thought was annoying in TCW: we saw how much people responded to her, how she brought fans into the fandom, and how she grew as a character while taking her fans on the journey with her. A character whose return to Star Wars animation spawned a joyous hashtag and a Star Wars Celebration event deserves a story worthy of her, and that’s what she got. It’s not a story where she’s just a small piece of a larger conflict, but at the same time: it is. The scope of the story is close, intimate – the events might seem small scale, but they’re not. See, Ahsoka deserved and got a story all about her journey: her journey after the Clone Wars, but before the Galactic Civil War. It’s a small slice out of her life, and the events covered are a small slice of the galaxy. But they’re events deeply significant to her, and it turns out that she’s deeply significant to what happens in the galaxy. As is right and proper.

Ahsoka doesn’t attempt to tell the full sweep of time between ROTS and Rebels. EK Johnston keeps the focus tight on Ahsoka and the players in her immediate story. But Ahsoka’s been through a lot, has seen a lot, and the galaxy is still going through a lot. We see how the end of the Jedi and the rise of the Republic affects her, but we also see the perspective of a Jedi veteran of the Clone Wars – a veteran at too young an age – and how the changes the war wrought on the galaxy differ from what once was. Ahsoka goes through some changes too, and while it seems the stakes are small-scale – what she does is anything but small. By the time we see her in Star Wars Rebels, she’s the Fulcrum of a rebel movement and her small acts of kindness in these early days ripple into large waves by the time of the original trilogy.

If this novel were named Ric Olie, one would expect that the titular character would feature prominently in the story. While we’ve been critical of the adult novel Tarkin for its storytelling and a strangely narrow focus, the choice to tell a close personal story is the right one for this novel. It’s the right one for this character. The audience has already seen how Ahsoka copes with a galactic war, and the audience has already seen how Ahsoka functions as a mentor figure. What the audience hasn’t yet experienced is a close look at how Ahsoka thinks and feels, and how she copes with the changes in the galaxy. Part and parcel of that is learning how Ahsoka comes to relate to the galaxy, and even how she sees the galaxy – no longer a large, abstract Republic but as a galaxy formed up of discrete individuals. It’s Ahsoka’s relationship to those individuals and her processing of her Jedi traditions and her new path that’s the true story of this novel, and it’s every bit as important as a galactic struggle.

That’s not to say that this is an inconsequential story in the galactic, high political scale of things – the audience learns things, but those bits of information are deftly parceled out when and if they’re relevant to Ahsoka’s journey. In many ways, then, this truly is a close perspective: the audience only knows what Ahsoka knows, at least in terms of what the text delivers. There is of course a sense of dramatic irony running through the entire novel – we know what happened to Yoda, Obi-Wan Kenobi, and, above all, Anakin Skywalker. But there’s little to no exposition for the sake of exposition, and if we’re told a fact (e.g., the Empire is doing this thing, to that place) we’re often also given Ahsoka’s take on it – or the take of the POV character, for the scattered instances where the perspective shifts.

This story is really about change. What may surprise people is how this change takes place – after the titanic changes in the galaxy wrought by a galactic war, it’s tiny, personal reactions with people which cause the most change in Ahsoka. Some may find that disappointing, but we posit that it shouldn’t. Sometimes Star Wars has a sense of scale that dwarfs its characters, or obscures the personal stakes for the galactic. But what happens on Raada matters. What happens to Kaeden matters. What happens to Hedal matters. What happens to each of these characters matters – even if on the galactic scale, they’re insignificant. Knowing what the Empire has done to the galaxy, knowing the fate of the Jedi and those who might have fought it, Ahsoka has to decide if she can stand aside. When the novel starts, she’s made the call – she’s disengaged. But through the course of the novel, she builds personal relationships and sees the danger that the Empire poses to those relationships. The abstraction of a lost Republic was a useful way for Ahsoka to stay away, but she has trouble applying that same calculus to those who have befriended her. She knew she never wanted to be in that position again, but it happened: and she has to decide what that means for her.

Ahsoka’s position has changed too. She no longer has armies at her beck and call, nor the full weight of the Republic and Jedi behind her. She possesses incredible power as an experienced Jedi and a war-honed tactician, but revealing either of those skills makes her a target, and puts those she tries to protect at risk. So what does she do? What can she do? If she walks away, is that consistent with her character? Who she is? She says she’s not a Jedi, but can she still walk away from that? 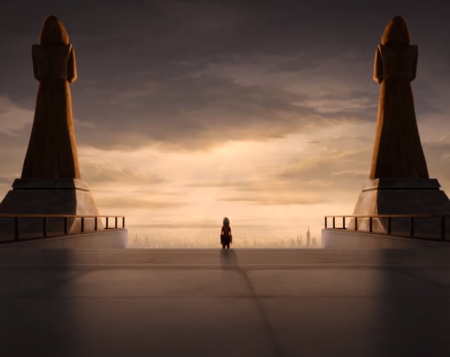 Cogs in a machine

As we put the finishing touches on this piece, several release-day reviews have already come out. Many are positive, some are not – but all have focused on the scale of the story and the nature of the villains. We’ve already mentioned that we like the close, personal narrative. But what about the villains, who folks have noted aren’t illustrated in very high relief?

The cold, impersonal nature of the Imperials in this story seems very much by design. As noted, the narrative is very close to Ahsoka – we largely know what she knows. When the narrative gets to the Imperial characters, it keeps its distance. The characters are drawn impersonally, with very rote motivations. But that’s the systematic, organized, and dehumanizing nature of the Empire – as the Empire extracts resources from the various worlds mentioned in the story, it also turns people into automatons. The Empire’s willing servants are among them.

Whether it was unconscious or a stylistic choice can’t be easily determined from the text. What is clear is that Ahsoka’s revulsion for the Empire aptly suits the way the Imperials are sketched and portrayed when they’re at the center of the POV. They’re either shadowy or two-dimensional cogs in the machine, in stark contrast to Ahsoka and her friends. If the Empire had its way, they’d all be like that. The novel’s very composition is in itself characterization.

It may be surprising that we’ve gotten this far and haven’t mentioned the space politics. Because oh yes, there are space politics. Truth is though, we talk about that all the time – and more importantly, we don’t want to spoil some great stuff in the story. Perhaps we’ll have to talk about it at a later date.

It would be remiss of us to note that this book may not be everyone’s cup of tea. We think Ahsoka fans will love it, and we certainly had a great deal of fun with it. To the extent that some reviewers have expressed disappointment, it looks to be that some expected a larger scale, a more substantial conflict, or another storyline (Siege of Mandalore, perhaps). That’s not this story. And that’s why we wanted to give our two cents – we didn’t have any particular story in mind when we opened up the book, so we weren’t disappointed with what we got. More to the point of this article, a small-scale, personal, immediate story proved to be very effective and very interesting.

We like variety in Star Wars storytelling. We liked the gritty realism of Twilight Company just as much as we liked the stirring mythological magic of The Princess, the Scoundrel, and the Farm Boy. We liked the galactic political drama of Bloodline as much as we liked the localized storytelling of the Servants of the Empire series. We liked the experimentality of both Aftermath and Lost Stars. There’s no one set way to tell a story, and Ahsoka tells the story of a character important to so many people in a way that’s very effective: by telling the story of what’s important to that character.  It may be hard for people who are not familiar with Ahsoka to get as much out of it, but those who are will get a lot out of it. And that’s a great way to tell a story. The story takes the form that the story demands, and it’s rather nice to see a character-centric Star Wars story.

We thank Disney-Lucasfilm Press for providing us with a copy of this book for review purposes.

4 thoughts to “Ahsoka and the joys of personal, immediate storytelling”