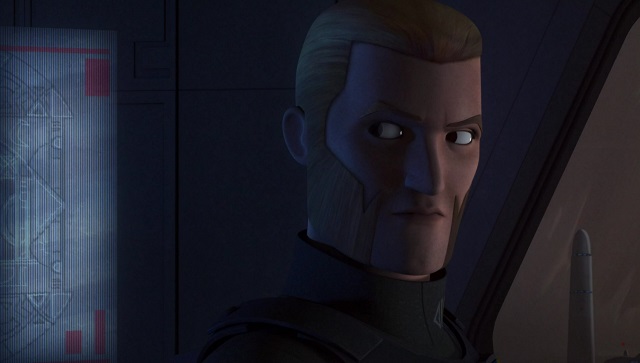 As this column has gone on, we’ve done a lot of discussion and writing on how Star Wars Rebels deals with its characters. With the ongoing plots and stories revolving as much around the journeys that Ezra, Kanan, Hera, Sabine and Zeb have been on as they do around, well, the plot, it stands to reason that we’ve spent a lot of time talking about them. A character that we talked about some but not as often as the others (mostly because he hasn’t featured as much since the end of the first season) is our stalwart Imperial Security Bureau frenemy Agent Kallus.

Kallus popped up again in this season early on as a bit of arm candy for Governor Pryce and under Grand Admiral Thrawn’s shadow, buddying up close to the two of them and seemingly back in good Imperial graces after his rather inauspicious rescue from one of Geonosis’s moons in “The Honorable Ones” back in season two. While his-first-name-is-Agent Kallus has not been the most visible of threats in the show’s later stages, having him come back and Thrawn taking him under his wing promised some interesting new developments to move forward.

At the same time, though, we started getting hints that there was more to Kallus this season than just back to being an Imperial lackey. Our first hint was back when Sabine was helping Wedge and Hobbie escape from Skystrike Academy, assisted by a new Fulcrum and by Kallus himself in a turn of events that stunned Sabine. At the time, it seemed like Kallus was just repaying Zeb for saving his life, and he seemed to intimate as much, implying that it was a one-time deal and not to expect any further assistance.

Then, in this episode, he was finally forced to play his full hand. Kallus was the new Fulcrum, and had been from the beginning. The heel-face turn that he started at the end of the second season had been progressing, slowly, during the timeskip and now, eight months later, he has taken it upon himself to try and funnel secrets and intelligence to the Phoenix cell. 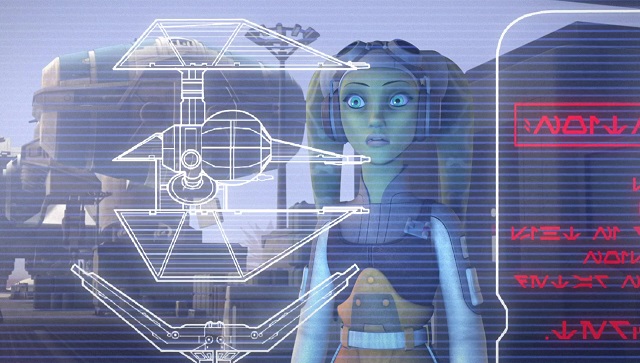 The whole idea that an Imperial officer, stalwart and fully committed to the New Order, willing to obey an order that might mean the destruction of an entire race, has turned coats somewhere within Imperial ranks is rather thorny ground. There is the point to be raised that Kallus has done nothing to deserve “redemption” and that him becoming a good guy all of a sudden has not been earned by the show as a whole. Aside from small moments in the first season, expressions mostly and bits of David Oyelowo’s always-terrific voice acting, and the aforementioned “The Honorable Ones”, most of the course he has embarked on has been off-screen.

But here is the point we would submit: Kallus hasn’t earned redemption. He is still a villain, a man who has done terrible things, and not enough good to earn his way into anyone’s good graces. We believe that the suddenness of his turning was of his own accord, started toward the end of the first season when Tarkin ordered two loyal (if stupid) Imperial officers killed right in front of him simply because they were not doing their jobs well enough to suit him. Kallus witnessed then just what sort of rewards his loyalty would earn him in the end. “The Honorable Ones” only cemented it, thrusting it into his face that, while Zeb might be fighting for a terrorist cell, he is also an honorable man with comrades who would die for him and he for them. Kallus was forced to confront the depersonalization of self that is ubiquitous in the Imperial Navy, and found that no matter what he did, he was expendable, he was not special, and he would either simply be replaced upon his own death or killed by his superiors when his failures numbered one too many.

What was more, he saw other young people, pilots like Wedge and Hobbie, being drawn into that same system. His first (on-screen) act as Fulcrum is doing whatever he can to get the young flyers out while they still have clean records, before they, like him, perform some great acts of destruction or death that forever besmirch their consciences.

After that, moving to this week’s episode once again, Kallus has moved from just helping others leave the Empire to outright sabotaging the Imperial war effort on Lothal. He’s not even aware of what secrets are being kept behind closed doors, he just knows that it’s bad for the Rebellion and makes sure to alert them to the factory so they can deal with it. Whether he overplayed his hand and alerted Thrawn, or Thrawn already knew, his activities have escalated beyond just aiding and abetting and into outright treason. Quite the far step to come from the man who once chased the Ghost from Lothal to Kessel to prevent the freeing of Wookiee slaves and set fire to Lasan with disruptor weapons.

It’s going to be interesting to see how this situation escalates before it resolves. Whether it’s Kallus who gets the better of Thrawn or Thrawn who gives Kallus the sort of reward traitors deserve, he’s now set on a collision course with his own commanders and leaders. Soon, he will be brought to light and unless the Ghost crew is there to save him, I don’t see him surviving. There is too much baggage in his past for them to fully redeem him from a narrative standpoint without some dramatic whitewashing, and I’m not sure I can see him joining the Rebellion anyway. What his ultimate fate is apart from those possibilities will be a fascinating thing to see unfold.

7 thoughts to “Rebels Revisited: The Turning of Coats”