Well, it’s that time again—a new Star Wars film is only two weeks away, and promotion, once considered by some to be worryingly sparse, has reached the “unavoidable” stage. According to ComicBook.com’s YouTube channel, there are at least sixteen discrete Rogue One TV spots, plus two behind-the-scenes featurettes, three “international” trailers, two standard trailers, the original one-minute teaser from last spring, and last but not least a full 39-second clip that was released literally as I was writing this paragraph.

With all this stuff floating around, some inevitably start to wonder aloud if they’re showing too much. This was an even more pronounced concern a year ago, when spoiler aversion for The Force Awakens was at an almost religious intensity, so it occurred to me, a moderately spoiler-phobic fan myself, to actually sit down and do the math. After adding up all the distinct content I could find, I ended up with a figure of about five and a half minutes, or about four percent of TFA’s expected running time. That didn’t seem like very much after all, and furthermore, it turned out that the later a scene was situated in the film, the less of it we’d seen—almost half of the content was from Jakku, in fact.

But TFA was a special circumstance by any measure; an utterly blank canvas where simply the existence of stormtroopers, for example was Major New Information to be doled out carefully. With Rogue One, we already know how the damn thing ends: the Death Star plans are handed off to Princess Leia with Darth Vader in hot pursuit. The stakes here are not in the mission’s success but in the ultimate cost in the lives of the team, none of whom seem to be around later—but even the most revealing trailers generally have enough sense not to reveal who dies. So all things considered, it’s reasonable to expect a much lower bar for withholding the details of RO from us, and for that to be reflected in the material they’ve released. But there’s only one way to know for sure, so it’s time once again to dive deep into the footage and see what’s what.

Before I throw the full table at you, let’s talk a little bit about the different categories represented here. Teasers and trailers are obviously the main vehicle through which movie footage is going to come out, and isolating the three “official” ones gives us an average of 94% new material per source—the initial teaser was of course 100% new, while the two trailers, though much longer, were closer to 90%. Next comes the “international” trailers, which I put in quotations because I’m not sure there’s such a thing as a truly international trailer—what we have here are the existing trailers recut for specific markets like Korea and subtitled accordingly. I’m inclined to lump them in with the TV spots, because even though they’re longer, the “spines” of all three are from earlier releases, with only scattered bits of new footage here and there. The TV portion of the above graph is pretty haphazard-looking, but taking the internationals and the TV spots together, you end up with an average of about 24% new footage—a clear distinction from the 90% above.

That just leaves the special cases—the second item on the graph is the fifteen-second “tease” video for the first trailer; it’s an odd duck in that it has a high percentage of new material but a low quantity, so I’m disinclined to treat it like either a trailer or a TV spot. The same goes for the 39-second clip that just came out: much higher ratio of new stuff than the typical item of that length, but not a huge volume of actual frames. [1]One fun observation I want to make here: last year, the clip they released was of Rey and Finn fleeing Niima Outpost and stopping short when the quadjumper is destroyed. At the time I remember … Continue reading Lastly are the two items I left off the graph: the behind-the-scenes reel from Celebration Europe and the featurette released on YouTube a couple weeks back. While both contained new material, [2]Worth mentioning: it wasn’t always clear, especially in the SWCE video, whether something was a film shot or a BTS shot, so as a general rule I counted anything that was clearly showing action … Continue reading the bulk of their running time is interviews and set footage, so their proportions were so meaningless that I decided to just ignore them entirely, lest the graph be even noisier than it is already.

While this graph includes everything, if you ignore the few weird bits you can see the same release pattern as last year—a steady build from the first teaser to the final trailer, then a big plummet down to the TV campaign and a relative trickle from then on. More than half of the footage we’ve seen (a little over four and a half minutes) comes from those three main sources, while the internationals and the TV spots only add about nine seconds each (on average) to the grand total of eight minutes, forty-five seconds, and two frames of footage. With Rogue One‘s reported running time of two hours and thirteen minutes, I can thus reasonably estimate that we’ve seen 6.6% of it. Both proportionally and in total frames, that’s about sixty percent more than I calculated we’d seen of TFA—around two and a half extra minutes. [3]Note here that the caveats I mentioned last year still apply—this is the estimate of a dedicated novice and it’s very possible I’m somewhat off.

That said, I wouldn’t make any grand claims about RO’s marketing being sixty percent more spoilery than TFA’s; while I’m very confident that there is in fact much more footage of RO out there than there was of TFA, [4]Incidentally, it occurs to me that this project gives me a unique point of view with regard to the Great Reshoot Brouhaha—while I did notice a handful of alternate takes floating around … Continue reading I was also much more thorough this year thanks to ComicBook.com’s very helpful cataloging and numbering of the TV spots. There were so many for TFA that I’m not entirely convinced I even saw them all, let alone spotted every new frame. While I did find three distinct RO spots that didn’t have anything new (and thus aren’t included here), there appeared to be numerous such spots for TFA—enough that I ultimately decided that that level of comprehensiveness wasn’t worth the trouble. Not so this time.

Sticking with that inciting question—how much are they showing us?—what’s more informative, I think, is the location breakdown. Just like last year, I compiled shots according to location to make them easier to search. But unlike last year, the proportions didn’t seem to correlate much with movie placement—of course, these are just guesses on my part; Eadu’s location in the story is hard to pin down, and I chose to assume that the planet the Rebels abduct Jyn from is Jedha, partly based on some assumptions about her relationship with Saw and partly just on the color scheme. It also seems likely that Yavin is visited at least twice: once when a wary Jyn first meets Mon Mothma, and again later when she’s all “hope” this and “freedom” that. Lastly, about a fifth of the footage is either space (random shots of the Death Star looking 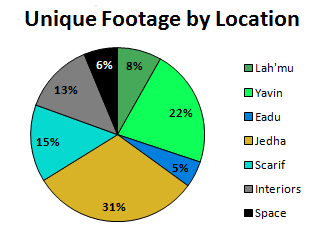 scary and the X-wing battle over Scarif) or what I designated “interiors”—Imperial hallways, pensive looks inside a U-wing, and so on. Whenever an interior shot was clearly on a specific planet, though, I classified it accordingly.

Yavin being a good chunk of the footage makes sense—it’s a familiar location that everybody was already expecting to see, and it’s home to at least a couple big scenes of exposition, not to mention the aforementioned inspirational quotes that work so well in advertising. Jedha being the biggest source of material (even discounting the prison sequence I’m less certain of) is a bigger deal because the bulk of it seems to take place after the team is already assembled and working together, and it’s most surprising of all that they didn’t just suggest that the Death Star would fire on it, they actually showed it happen. That’s a pretty big deal, but the aftermath of the superlaser combined with the assorted urban fighting means that that location is the source of a lot of general action imagery without an obvious context. We know Saw is based on Jedha, but nothing about what the team is actually doing there—recruiting him? Warning him the Death Star is coming?

The biggest difference from TFA is the (presumed) finale on Scarif; including all the X-wing combat, ground combat, and the lightsaber battle, less than 12% of the TFA footage I analyzed was from Starkiller Base, versus 15% here not counting most of the “space” shots and likely a handful of the “interior” shots—which I’d ballpark as bringing the Scarif total closer to 20%, or about 105 seconds. In terms of “spoiling the plot”, this is maybe their most noteworthy overstep—but that said, a lot of what we can piece together from the Scarif footage is stuff that we already knew would happen in some form (like, I dunno, Jyn carrying data tapes to the top of a giant transmitter), so I’d assert that its effectiveness as advertising outweighs its spoilery nature (whereas similar moments from TFA would’ve been downright shocking).

In conclusion: if The Force Awakens was at the low end of spectrum for the proportion of a film to be revealed in pre-release marketing (it’s hard to imagine anything with a Star Wars budget being more secretive), I’m pretty confident that Rogue One is near the high end. So with that said, I’m officially calling this experiment concluded—if you hear someone complain a year from now that they’re showing us too much of Episode VIII, calmly reassure them that it’s somewhere between four and seven percent.

One thought to “So, how much of Rogue One have we seen already?”