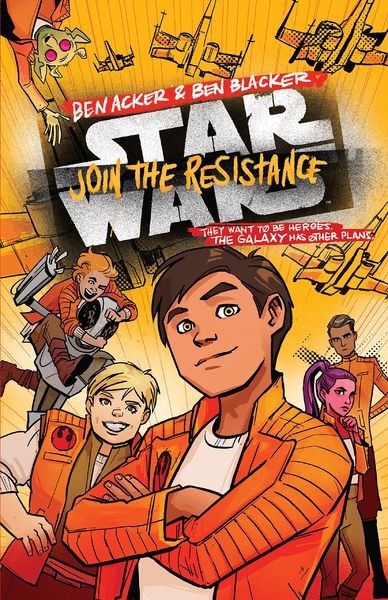 (Note: This review is attempting to be spoiler-light – it’ll describe the main characters and that’s essentially it.)

Okay, hear me out. I know comparing dang near anything to the late, beloved Aaron Allston’s Wraith Squadron X-wing books is a tall order to justify. I don’t think anything could really fill those boots, but if I had to describe the first Join the Resistance book in a few words, “Wraith Squadron for kids” is exactly how I’d do it. It gets across what’s at the root of the story: a group of misfits trying to be heroes. Some of them don’t come across as misfits at first, and some definitely do. But they’re all imperfect people, trying to defy stereotypes and going through zany hijinks in order to get there. You have to suspend your disbelief a little further: if you could believe that Wedge Antilles could get away with assembling a squadron of washups who performed bizarre undercover missions, then this book asks a little more of you. It asks you to believe that the Resistance would recruit teenage cadets (not too unbelievable), and would train them on their headquarters at D’Qar (a little more unbelievable).

It’s important to remember that this book is for kids. But that doesn’t mean it’s not enjoyable for adults – it’s not as nuanced as the Servants of the Empire books, but I had a great time reading Join the Resistance and could hardly put it down.   And it’s not un-nuanced, either. Like I said, the characters are not all what they seem to be. The story also plays into The Force Awakens and the political state of the galaxy, set as it is immediately prior to TFA. There’s some interesting new information in the book, but I wouldn’t say that anybody should read these books for information on TFA or upcoming movies. You’ll just be disappointed, and that’s not what these books are about. Rather, read these books if you want a fun TFA-era story about youngsters from different walks of life learning what it is to be good people and finding that it’s not as easy a question as it sounds.

The title of the book series is Join the Resistance, and it’s clear from the get-go where this is going. So let’s briefly describe our cast. The protagonist, Mattis, is a fifteen year-old human orphan boy who grew up always trying to do the right thing, in emulation of the heroes of the Rebellion he’s heard so much about: Luke Skywalker, Leia Organa, and Admiral Ackbar. He performs good deeds for his fellow orphans, which catches the eye of Resistance recruiters, and he’s brought to D’Qar. Along the way,  he meets his fellow squadmate cadets. There’s the Rodian boy Klimo, who’s rather overenthusiastic about everything to an annoying extent (think Rosh Penin from Jedi Academy, if that means anything to you) but Mattis treated him with decency, so they’re “best friends” now. Lorica is a Zeltron girl who has a heroic reputation for singlehandedly foiling some smugglers, though she’s rather annoyed at the fame and attention. Sari’s a human female who looks like she’s brawny and bulky, but she’d rather think her way through problems and enjoys computer slicing. Dec and his droid AG are “brothers,” who work hand-in-hand getting themselves into trouble and out of it, and don’t think too much of regimented authority. Rounding out the core characters is the regimented authority figure, Jo Jerjerrod, who’s the squad leader of all the cadets. 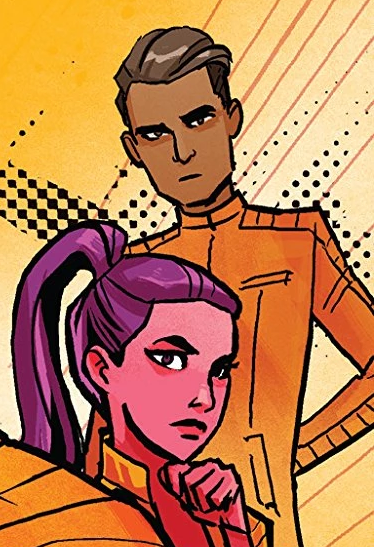 So far, this sounds like a veritable Breakfast Club of stock characters: the well-meaning hero kid, the annoying sidekick, the stuck-up girl, the tough-looking person with a heart of gold, the rebel, and the square. The characters line up into their factions – one side for following rules, the other side for rejecting them, and Mattis in the middle trying to decide which is right and which isn’t. The structure will be familiar to most adults, and probably some kids as well: these kids aren’t all the stereotypes they seem, and the reader learns there’s more to them than first glance. What’s more interesting is how it happens, but I won’t spoil how that comes about. Suffice it to say that I think even a knowing reader will get something out of it.

And let’s not undersell these characters. They’re stock to an extent, but having a Resistance cadet group led by a kid named Jerjerrod? I’m sure I won’t be the only one wondering how someone with the same family name as an Imperial moff ends up with the Resistance, and the intriguing relationship between this character and our political situation decades after the Battle of Endor is perhaps my favorite part of the book (seriously, this kid throws random Gungan phrases into his language. It’s awesome.). Jo Jerjerrod’s not the only unexpected thing in the book that I enjoyed: I also have to mention that there’s a random character from the Core World of Ganthel – that is, RAE SLOANE’s homeworld. I enjoyed that, though I usually enjoy Core World characters.

Other random characters include a cast of named and background characters of multiple different species. In fact, I think all told, human characters might be in the minority in this book. That’s a refreshing change: the galaxy far, far away is filled with all sorts of species and it’s always a little boring when stories are inevitably just about humans. The main cast is mostly human – and the Zeltron Lorica is pretty close to being human too – but I was impressed with the number of background characters of alien species. It always lends a degree of immersion to me when authors do this, showing their comfort with the setting and making it feel as vibrant and alien as it does in the films.

As I mentioned, these characters are recruited by the Resistance, who’s kept and eye on these youngsters. Jo Jerjerrod is training them as part of his squad of youngsters, at least in part because the next generation should be picking up the torch of these old Rebel heroes. We see a few of them in the story – Ackbar plays a large role as the overall “boss” (General Organa is yet to be seen directly, though is often alluded to). Jerjerrod himself particularly loathes the First Order (again, interesting!), and the other kids are variously interested in becoming heroes – or just making a difference. 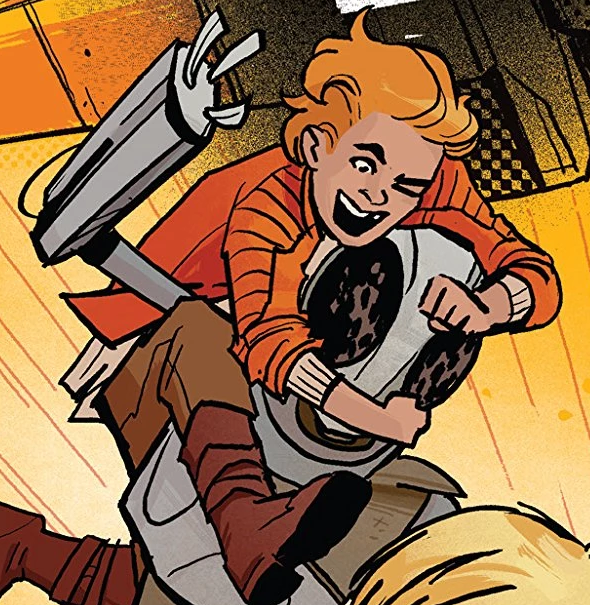 Mattis is the main character, and he tries to decide how best to do the right thing and he realizes that it’s a lot more complicated than it sounds. Do the ends justify the means, or are the means themselves important? Is it better to follow the letter of an order or its spirit? How does being part of a military organization affect one’s gut decisions? Mattis takes it as a given that the Resistance is good and the First Order is bad: his devotion to heroes like Leia and Ackbar makes that an easy enough choice. It’s the harder ones that frustrate him.

I’m not going to spoil how this plays out in the story. But I emerged very satisfied with how the overall political/war narrative connected with the smaller interpersonal narrative, and how that intertwining of the two added more complexity. One thing I will say is that this story isn’t really era agnostic: it couldn’t have been taken out and placed in the original trilogy or prequel era and remained the same story. To me, that’s a big plus for the story.

Join the Resistance isn’t just a sequel trilogy tie-in for kids, but it’s a story that actually makes use of its TFA-era setting in ways I really don’t want to spoil. It’s different from Journey to the Force Awakens, with framing stories that were pretty unnecessary and irrelevant to the main story. And it’s different from Before the Awakening, which was designed as a character introduction. Instead, it invites the readers along with the characters to try to make sense of the political situation and what that means. There’s a lot of character intro stuff before that happens, but it means that I’m confident that the continuing books in this series will pull us even more into the TFA period and make great use of the setting. Combine the effective use of story setting with the compelling characters and the deft, humorous hand with writing and I’ll say I’m quite looking forward to the next books in the series.

2 thoughts to “Wraith Squadron for Kids: Join the Resistance #1”