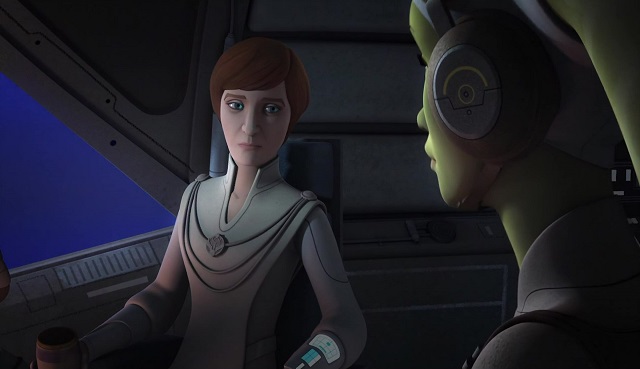 Ben: Rebels has been seeding appearances from different portions of the budding Alliance since the first season, when Bail Organa showed up as a secret observer of the Ghost crew and their increasingly public actions. But the third season has made a clear and definite effort to bring more of those pieces into play, until this week’s episode sought to unite them on screen at long last, showing one of those beginning moments that we always knew had happened but have never actually seen before now.

The keystone to this event is Mon Mothma. We get to see her formally resign her seat in the Imperial Senate and call for any and all fellow rebels to unite under a single banner. While we don’t see the formal signing of an organizational article stating as such, and Mon is far from the first rebel or even the first senator to turn against the Emperor, she is the most high-profile defector from decadence that we have seen up to this point. Major note is made of her courage to stand up against the Empire, fighting in the senate instead of with blasters since before the end of the Clone Wars, and her finally stepping down from that post is a major turning point in the escalation of the war.

Mon Mothma has been showing up a lot in Star Wars lately. She has major supporting roles in a couple of books (Bloodline, Empire’s End), a brief but central role in Rogue One, and now she pops up in Rebels. In the old Expanded Universe, she used to be little more than a name drop, listed as one of the founders of the Alliance but never given all that much to really do aside from administrate the New Republic and dole out advice to the far-more-central Leia Organa. Now, she’s just as prominent before the events of Return of the Jedi as she is after it, showing that she did more to help establish the rebellion than just sign some papers.

Jay: I have to disagree in part. I agree that it’s really cool that Mon Mothma’s been playing such a key role in the new canon, but the surprise isn’t because she wasn’t used in the EU: rather, that it seems such an EU thing to do. Mon Mothma was all over the place in the EU: she had roles as the leader of the Alliance in video games such as X-wing, Dark Forces, and especially Rebellion. She was made the Chief of State of the New Republic in the original launch of the Expanded Universe: the Thrawn trilogy, where she played a similar consensus role as she does in the new Aftermath books. Her role in founding the Rebellion was a key plot arc in those novels, which were as big as the EU ever got. And of course, she was everywhere in West End Games, which filled out her backstory (and was identical to what we’re getting in the new canon).

If Mon Mothma were little more than a name drop, people wouldn’t have gotten so excited over seeing her in the first Rogue One teaser. That was basically the biggest thing I recall about that: the internet collectively freaking out over Mon Mothma. And I have to say that they weren’t doing it because of her minor role in Return of the Jedi. It’s because people had already known through background material that Mon Mothma was an important figure to the Rebellion. 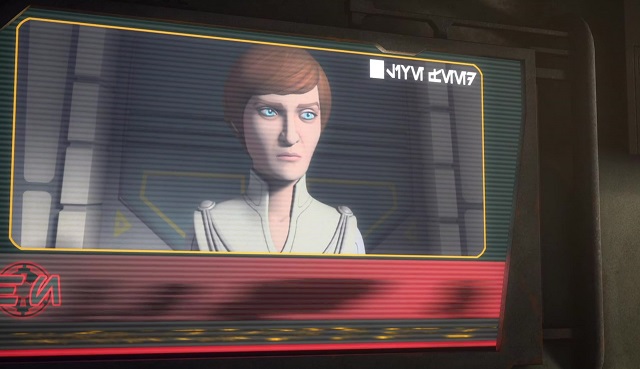 That said, she is certainly appearing frequently in comics, novels, and now movies and TV. It makes perfect sense given her role in the Rebellion. And it’s welcome. But it makes perfect sense and feels so right because of what the EU did for the character, who was never treated right in the films before that (she was important in her brief role in Return of the Jedi, but was almost entirely cut from Revenge of the Sith except for a non-speaking background appearance). If anything, it is nice to see visual media giving Mon Mothma the due that the books, comics, and games have long given her (oh, and I’m not forgetting TCW though — TCW did at least pick up on her ROTS appearances and use her in the show).

David: I’m going to take Ben’s side here. I don’t think the people that freaked about seeing Mon Mothma in the Rogue One trailer were thinking “wow it’s that character from the Dark Forces cutscenes.” It was because of her role in Return of the Jedi and–most importantly–the immense memetical power of the many Bothans that died to bring her that information. Same reason people freaked about about seeing Admiral Ackbar on screen during The Force Awakens. Mon Mothma’s role in the EU came mostly from sourcebooks and additional material, but narrative sources didn’t use her to the extent they could have–she’s, after all, the leader of the Rebel Alliance. You could even say that her most relevant contribution to the EU saga was getting poisoned and then retiring and getting a ship named after her.

I’m not blaming the EU for mismanaging her character, though. I completely understand why this happened: pre-ANH Mon Mothma had to be a cypher until she first appeared on screen (sadly only during two seconds of Revenge of the Sith) and post-ROTJ Mon Mothma became a completely redundant character once Chief of State Leia Organa Solo was on the stage. A combination of the prequels being over and Leia’s completely different role in the post-ROTJ canon makes it considerably easier to use Mothma now.

We are all in agreement, anyway, that it’s fantastic to see her getting the deserved spotlight in the new canon. I’m really looking forward to seeing her continuing role on Rebels.

3 thoughts to “Rebels Revisited: Our Lady in White—Mon Mothma in Focus”