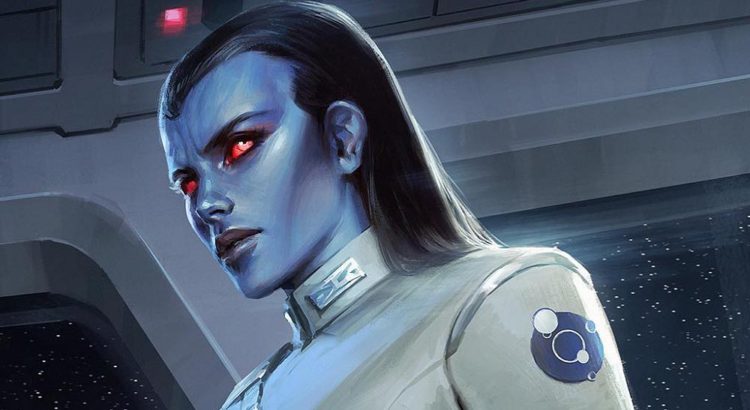 Chaos Rising immerses us in Chiss culture, and I’m eternally grateful that the book includes not only a Dramatis Personae of names, but a rank chart of Chiss family titles and positions. This information is useful even for longtime readers of the old EU, which previously explored Chiss culture through a Star Wars Gamer article, a couple New Jedi Order novels, and some books by Tim Zahn himself. This time, we’re seeing Chiss culture through the lens of only the original author, Tim Zahn, and it’s a bit different in naming conventions and structures than we might remember from the EU.

Ar’alani – whose full name is Irizi’ar’alani – is a great example of this. Her core name is “Ziara,” but there’s a reason we were previously introduced to her as Ar’alani. I’ll leave that for readers to discover, but it has everything to do with Ar’alani’s journey through the course of this novel. As I said before, her career and evolution as a character are one of my favorite things about the book.

The book jumps around through time a bit, with both a main storyline and a series of flashback sequences called “Memories”. If you have the physical version of the novel’s first run, the blue page edging is extra indented during these memory sequences and it’s a really nice visual touch. The flashbacks to Ar’alani’s academy years are some of my favorite scenes in the book, and I wish we could have spent more time there. But the main role of them seems to be delivering context, information, and characterization in a slow drip that lets the primary plot of the story unveil itself like a mystery.

It’s not the greatest mystery because of the tendency of characters to just explain everything to the reader (through the guise of explaining it to other characters). I did like seeing how Ar’alani navigated the pressures of Chiss ruling family intrigue and political machinations and tried to keep her mission-oriented focus on military matters affecting the entire Chiss Ascendancy. It’s a little old hat in Star Wars, though, the idea that interfering politicians are corrupt and busy serving their own interests while only the military thinks wisely and broadly. I don’t think that was the healthiest trope in the old EU, and we’ve seen it again and again in the new canon too. There’s nothing new or refreshing about seeing that same tired military fetish employed in a different setting.

Still, Ar’alani is an interesting character. She’s a professional military woman, more fun than her no-nonsense portrayals previously suggested, and she is broad-minded enough to know when she’s made mistakes and identify flaws in her thinking. One of my favorite scenes is when she realizes that her whole upbringing, she’s thought of non-Chiss aliens as basically clever animals, and how flawed and wrong that is. She learns to recognize them as people – and as seemingly obvious a concept as that is, it makes me look forward to seeing how she develops and if she starts pushing back against Chiss retrograde thinking.

The Caretaker and Her Charge

Speaking of retrograde thinking, it’s time to get to my other two favorite characters and the unfortunate way their arcs were framed in this story. Mitth’ali’astov (Thalias) is a civilian who gets herself signed on to a Chiss naval expedition by arranging to become the caretaker (or “momish”) of a nine-year-old Chiss hyperspace navigator, Che’ri. Their relationship is one of my favorite parts of this book, and I wish there was more done with it.

The Chiss don’t use navigational computers to plot long hyperspace jumps, but instead use young children gifted with “Third Sight” (the Force) to help ships through the dangers of the chaotic Unknown Regions. These children lose their Third Sight as they grow older, which was a very intriguing conceit brought up in previous books and I’m glad to see it get explored further. Thalias is one such ex-“sky-walker”, and her past experiences in the role make her uniquely positioned to be a good caretaker for these young children.

It makes a certain amount of sense that children on a military ship need a caretaker. What makes less sense is that they’re never ex-sky-walkers, but that seems to be something the books might explore. What’s downright strange, though, is that the caretakers are called “momishes” and apparently tend to be exclusively women? This was covered in the Den of Geek review I linked earlier, and I am scratching my head at that particular authorial decision.

Nevertheless, Thalias and her sky-walker charge, Che’ri, are very interesting characters precisely because of this awful program the Chiss have of using children in military ships to navigate, and apparently doing so in such a fashion that they lose their connection to the Force. That’s uncomfortable but it’s also very interesting, particularly because Thalias the ex-sky-walker knows all the flaws in the program and all the ways they mistreat these children, and she’s determined not to do that to Che’ri.

Che’ri’s point of view is very interesting too, and not solely for her relationship to her caretaker. It’s nice to get the perspective of a child who is placed in a situation not of her choosing and has to make do with anxieties and stresses related to her navigational performance that should never have been placed on her in the first place. It’s somewhat interesting to me that we get more about Che’ri’s motivations and interests than we do either Ar’alani or Thalias, despite the latter two characters’ greater presence as POV characters. We know what Che’ri likes to do for fun and we know what she would like to make of herself after her stint as a sky-walker.

So far, I’ve treated Ar’alani, Thalias, and Che’ri like they’re the main characters of this story. They’re not. But they really should be. Their struggles to deal with the ossified and hierarchical Chiss society are by far the most interesting parts of the book. Of the three, I have the best sense of the hopes and dreams of the young child. Ar’alani’s goals are vaguely military-oriented, but all of her actions in the story are as a backstop to someone else. Even worse, Thalias’s motivations for joining the Chiss military expedition were entirely in service of another character’s story. I think that’s extremely unfortunate, because it undermines the most interesting characters in the story and makes it all feel like a tedious retread of a story we’ve seen already, sprinkled here and there with a bit of Chiss lore to fill out encyclopedia entries.

I hope the next two books in the trilogy do better. There’s so much potential. Late in the novel, it looks like Thalias might start developing her own story arc as she thinks about her future plans. I hope her story truly becomes more about her, because so far it seems like even this potential future nugget of development is still centered around Thalias helping out another character. What does Thalias want with her life? I don’t know, but I hope she at least has her own story.

I don’t know if we’ll see Che’ri again. We’ve got a decent sense of her personality as a youngster, but it’s unclear if she’ll continue to play a role in the trilogy. She’s an ideal way to explore how these kids see and interact with the Force, and how they deal with the pressures of being not quite child soldiers, but child…assets? I would like to see her get some more agency in her story and perhaps with the support of other characters who see her as a person rather than a tool.

Finally, that brings me to Admiral Ar’alani. She seems to be the most clear-sighted of the characters we encounter in the story, most aware of the flaws in Chiss culture and society. I want to see her bringing her insights to bear and trying to do what she can for her society. She’s not the main character of this story (unfortunately), but I wish she could at least be more of her own character.

Right now, the trilogy looks more like “alien threat of the day defeated by genius military leader despite interfering politicians and jealous colleagues”. We’ve seen that story a lot. Chaos Rising introduces us to interesting POV characters who could have great stories to tell amidst a stifling and questionably-moral culture – if they’re allowed to have them.