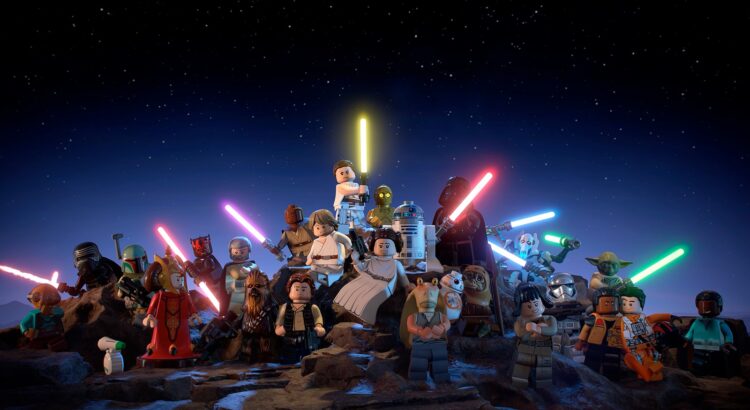 For all that I was expecting great things of Lego Star Wars: The Skywalker Saga, it still managed to exceed them. It did particularly well in its version of the main story, bringing new emphasis to certain aspects and expanding and improving upon others. Above all, it did something entirely unexpected: not only did it treat the nine films as a series of nine films, it made the story flow from the start to the end. Yes, that does include the sequel trilogy.

My route through the set was originals then prequels then sequels, but by all accounts, the game is rather smart in enabling any structure. You want to play in the machete order? Off you go. Two ace cards the game plays early and frequently are the assumption that the audience knows the material and a very smart sense of humour. The humour turns up all over the place in surprising ways and, at times, takes a very meta tack. For instance, one Phantom Menace level is called Better Call Maul. Similarly, a quest in The Rise of Skywalker that you play to unlock Beaumont Kin is called Second Breakfast, a sly nod to Dominic Monaghan’s role of Merry in The Lord of the Rings films. These jokes and others show that Traveller’s Tales (henceforth TT) were aiming this game at everyone. Sure, kids are the primary audience, but not exclusively.

George Lucas’s approach was mostly on the big-picture, grand-themes stuff — details, consistency, these were not his forte. This was demonstrated in how he syncs up the end of Revenge of the Sith and the start of A New Hope — it kind of works but when you start looking at the details it gets a bit iffy. The sequels, in some sort of weird homage to Lucas, replicated this freewheeling approach to its component parts. The result was three films but not a trilogy. It had the pieces to be so but the films just do not work together. The game cannot entirely fix all this but it has a very good go at it.

If the way the nine films are now to work is via thematic repetition, then this game is the best expression of it. They looked at all nine and started asking questions of what it meant for this character, of this type, to be acting so here and another similar one acting so later on, and then asking what should flow from the one to the other. If we have Jedi deflecting force lightning in both the PT and ST then Luke should be able to do that in the OT too. And the answer is? Luke did — not in the film but in the novelization, and with that small opening TT really went to work. They crafted an entire boss fight of Luke and Vader versus the Emperor! An indignity you say? The Emperor’s suffered worse, like being defeated by Wicket in 1993’s Super Return of the Jedi on the SNES. Via a cheat code, Wicket versus the Emperor was an utter massacre. At least here the Emperor gets to throw some lightning around, gets some reflected back at him and has his Royal Guards storming in to protect him from his traitorous apprentice.

While this boss fight was both surprising and fun, I did not latch onto the full significance of it until much later. Much, much later, at the battle of Exegol and Rey’s duel with her evil-incarnate grandfather. Having done that fight at Endor and the duel in the Senate with Yoda, the repetition of themes clicked. I could see exactly what they were going for and it absolutely worked. But it only works by not dismissing any part of the whole — the ST needs both the PT and OT to work and vice versa.

One quest has you finding a wandering Wookiee in various locations. This Wookiee sometimes comes out with some very sharp one-liners. For instance, you find him on the Death Stars and in one of them the line is to the effect that this, the Death Star, is all leading to placing a big gun in a planet! Hmm, yeah, wonder how that’s going to turn out?

Talking of the sequel trilogy, there is some very deft footwork here in how it is presented. Save for a boss fight against Luke that struck a sour note, it is as if TT went through the trilogy with an industrial sander. They shaved the sharp edges off all over the place, they boosted the fun factor as much as possible, got rid of or reduced the dodgy stuff — the result is a far better ST. Nor is it just The Last Jedi that benefits, so does TRoS. One of the biggest problems the last film has is its far-too-fast pace. I get why it is that way, it has a lot to do and not enough time to do it, but the pace still hurts. By focusing on five specific pieces, TT give the film space to breathe. This in turn delivers some remarkable benefits.

The biggest is easily the Rey/Kylo conflict and the portrayal of Ben Solo. In the film, Ben Solo is a blink-and-you-miss-it affair, here he has more time. The multi-phase boss fight on the Death Star II wreckage on Kef Bir feels more meaningful. It has more time to convey its themes and it’s a lot of fun smacking up Kylo. The redemption sequence with Han and the idea that Kylo Ren died on Kef Bir with Ben Solo being revived is far more effective, in part due to the duel’s follow-through with the Emperor’s Sovereign Protectors and the Knights of Ren. It is in the film, yes, but so abbreviated. In the longer version here, as it switches the player between Rey and Ben, as they take out their adversaries, I got a far better character portrait of Ben Solo! And that pays off the entire Rey/Ben/Kylo arc far better in turn. Rey also benefits from this — with the dodgy romance elements played down, her take of concluding she has to learn from Kylo because Luke won’t teach her works better, still not great but not as bad as it was.

One point that works much better is Kylo’s going berserk on a computer console. The handling of his temper in TFA was all over the place from trying to be serious by showing a terrified Imperial officer trapped in the room to a joke of two stormtroopers turning away from the room Kylo is smashing up. Here? Everyone is smashing up computer consoles, Obi-Wan, Qui-Gon, Yoda, Luke, Leia — you name them, they were smashing everything up. It’s a Lego game, you get studs by smashing stuff up.

The other big benefit for the sequel trilogy is getting to explore the locations. Crait and Pasaana are alright, as are D’Qar and Ajan Kloss. But Jakku? Jakku has one of the most distinctive looks of any Star Wars planet. The visual design of wrecked, crashed Star Destroyers everywhere, broken X-wings, crashed TIEs of all varieties — it comes across so well as an Imperial graveyard. Canto Bight is similarly great to wander around. And then there is Exegol…Exegol is a dump, but it’s a glorious dump to explore. It also has some very wry scripting. You will talk to a Sith loyalist who will lament the Emperor being “exploded by his own kin”, while another Sith loyalist decides to turn the Emperor’s throne into a nightclub!

It is not limited to the sequel trilogy planets either, or its capital ships — yes, you can get those too and you can board and explore them. All of the twenty-odd planets presented here, some with multiple districts, each with a number of interior spaces and a surrounding space area, are perfectly rendered. Nor is the rendition static. No, there are lots and lots of NPCs running around. You can’t talk to them but just having the number of beings moving around that this game does gives a great sense of being to the world, it makes it feel more real. It also shows how easily Star Wars can embrace and be boosted by its diversity.

The other two trilogies need less help, but still benefit. In the prequels they zoom over the entire romance of Padmé and Anakin and Anakin’s massacre of the Tuskens. But they don’t miss an opportunity to have Vader later quip that a Kyber brick is all the better for having no sand on it! The way the original trilogy deals with Luke’s family revelation in Return of the Jedi is very clever. Other little things that sell the world such as being able to disguise your rebel character as a stormtrooper. Or a stormtrooper on the Death Star quipping “you’ve got anger problems, pal” as you’re smashing up everything in sight. Do a space battle? It will default your side to the character you have flying — so you might be in an X-wing, but if you’re flying as Darth Vader? Then you will be fighting for the Separatists/Empire/First Order.

What this game says more than anything else is that Star Wars really is for everyone, even the bits you personally may not like. And those bits? It takes and repackages them to present them in a way you never saw coming and which might, just might, be far more fun than you expect. It is that, above all, that makes this game stand out to me. I knew I wanted to play it but I did not expect it to be such a boost to Star Wars as a whole. This game makes Star Wars better than it was.