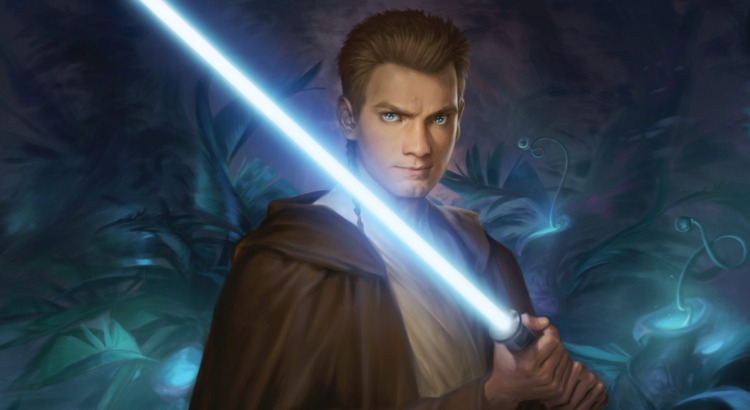 This involves a close read of a passage of Padawan, but it does not contain plot-related spoilers.

I am the type of person that Padawan by Kiersten White was written for. I am very much the fan being served by the various elements therein. Obi-Wan Kenobi is my favorite Jedi. My favorite minor character gets a handsome cameo. And, most importantly for this article, it intersects with my youthful introduction into Star Wars novels: Jude Watson’s Jedi Apprentice.

Published in the Legends continuity between 1999 and 2002, this mass market pulp fiction series about Obi-Wan’s Padawan years has left a mark on many a fan. Fandom celebrated when Apprentice characters like Siri and Bant were later integrated into the new canon. Siri in particular was an interesting choice to include in Padawan, as Jude Watson later wrote her and Obi-Wan into a romantic relationship.

Padawan, however, tackles that Legends relationship a little differently, and it was this that ultimately dominated my thoughts after setting the book down. For everything I loved about the entire novel, I kept returning here, to a single passage. Because I could hardly believe what I was being given.

I have hardly been shy about asexuality and aromanticism in this column before, and Obi-Wan Kenobi himself has come up in said discussion:

“There’s also Obi-Wan, who feels a-spec (on the aromantic or asexual spectrums) to me, especially in the context of Satine Kryze. Their dynamic challenges the idea that romance and sex are innately good and should override every other motive in a person’s life. Obi-Wan and Satine decline to pursue a relationship in order to uphold their oaths to others, and neither is painted as cold or unloving in doing so.”

For everthing I took from Obi-Wan and Satine’s arc as an aromantic man, I expected it to remain wholly within the realm of headcanon.

And yet, here Padawan is.

Now, for the sake of transparency, White did give a metatextual reason for why Obi-Wan has no romantic entanglements in her novel:

“[Satine is] the reason why there are no romantic subplots in Padawan. Obi-Wan commits absolutely in everything he does — including first love. I couldn’t dilute that!”

Therefore, it would make sense for the entire book to go without any mention or romantic or physical attraction. But that’s not what Padawan does. Instead, it provides a moment where seeing the romantic and physical relationships of his peers prompts Obi-Wan to wonder if those sorts of relationships are for him.

Would he ever get to a point where kissing someone felt like anything less than a betrayal of himself and the Jedi? And if he did get to that point, who would he want to kiss? The Lenahrans were confident and charismatic, which was attractive. But he couldn’t imagine just… kissing any of them.

Maybe he didn’t want to be with any of them but rather to be more like each of them.

Or maybe he wanted to kiss all of them. Not Mem, though. Because he had a feeling that would upset her very much.

He wasn’t going to kiss any of them, regardless.

[Bolding added by me]

When I first read this passage, I was blown away. Never in a million years did I think that we would be given in-text support for an Obi-Wan Kenobi on the aromantic and/or asexual spectrums. But here we have it, not as someone projecting an idea onto him, but as Obi-Wan himself wrestling with how he is different from his peers.

So much of what Obi-Wan is going through here lines up with common asexual and aromantic experiences.

Even before this passage is a nod to Obi-Wan’s Legends relationship with Siri. It’s noted that while Siri would be interested in a relationship, but Obi-Wan regards that as “an obstacle, not a temptation.” He does not feel the attraction of this. He can recognize that these are attractive things, but he himself is not experiencing the draw to kiss Siri or the Lenahrans.

Furthermore, the question of “do I want to kiss all or none?” is such a prevalent experience in the asexual community that an academic paper was written on it. Without knowing that there is a word to describe lacking attraction, a lot of asexual people (and likely aromantic folks as well) identified initially as pan or bi, because they felt the same way to all genders. Just the way they felt was… nothing.

And it’s especially important to note that Obi-Wan’s reticence towards a relationship isn’t about the Jedi Code. The Jedi Code does factor into his considerations, but kissing someone at this point feels first and foremost as a betrayal to himself. This isn’t Obi-Wan experiencing some repression from his religion; in fact his fellow Padawans feel quite free to pursue their attractions. This is Obi-Wan not experiencing attraction.

Not since Leox Gyasi’s speech in Into The Dark have we gotten such extensive and explicit a-spec thoughts directly from a Star Wars character.

What makes this even more exciting is that we know Satine Kryze is in Obi-Wan’s future. A fact which doesn’t contradict Padawan’s a-spec coding, but rather gives us an outlet to explore elements of queer theory. So let’s use Obi-Wan to discuss the Split Attraction Model, the spectrums of attraction, and variations on committed relationships.

If the only person he is ever attracted to is Satine, there is a place on the aromantic and asexual spectrums for that. Demi and grey are both types of a-spec orientations. There’s no one clean way to describe either, because they exist on those spectrums. So a very brief, un-nuanced description is that grey and demi people do not experience attraction unless they are in a specific circumstance or until certain parameters are met.

White’s description of Obi-Wan, that he commits fully in his first love, could be interpreted as demi or grey attraction. It was attraction that he did not experience until a specific circumstance.

For example: I am aromantic and asexual, but I am physically attracted to Dexter Jettster. I want to hold his hand, kiss his knuckles, and be bench-pressed by his “massive shoulders like mountains.” (And that is why I had to betray Eleven-ThirtyEight and give my review of Brotherhood to Rogue Podron.)

A key phrase in the a-spec community is “queerplatonic relationship.” This describes a relationship that contains elements that are often reserved by society for romantic ones  – such as the level of commitment, the sharing of life, partnership ties, displays of affection – but operates without romance.

This sort of relationship would be the same level of commitment as the marriage that Anakin broke the Jedi Code for with Padmé. This sort of relationship could be one that Obi-Wan wanted with Satine, but chose the Order instead. It would still be the same level of emotional commitment and sacrifice, but simply looks different than what our romance-centric society expects.

At the end of the day, we don’t have a specific outline of what queer identities Obi-Wan falls under. We rarely get such strong labels in Star Wars itself, with labels usually occurring outside of the GFFA, such as the writers of Aphra making it clear she is a lesbian and not bisexual, or the official bio of Leox using the word “asexual.” The closest we get to an in-universe use of our real world terms is when Anakin says in Queen’s Hope that the clone trooper Sister has “transcended gender.”

What Padawan does give us is an experience. It lets us peek for a moment at the way Obi-Wan wrestles with how he feels or doesn’t feel attraction. And that is important too. It invites exploration on behalf of the reader.

For myself, an openly queer adult, it was a way to invite other adults to learn more about aromanticism and asexuality. For the intended audience, children, it’s a way of letting them know: it’s okay to have these questions and feelings. Even the greatest Jedi Master did, and you too will find your place.

Thanks to Disney-Lucasfilm Press for allowing me early access to Padawan for review purposes.