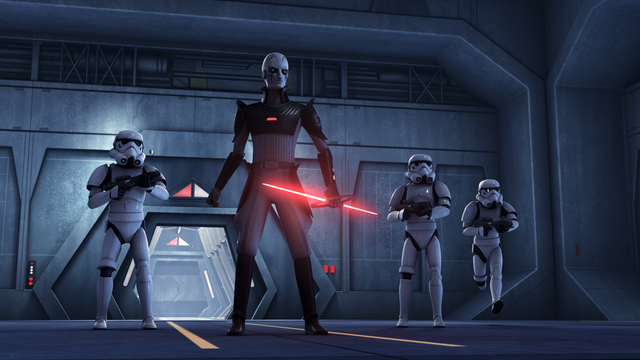 The Imperial Inquisitors first appeared on the old West End Games roleplaying game, like most good things with the Expanded Universe (I’m just kidding –okay, I’m not). The first time we heard anything about Inquisitors was in the pages of one of the first books to try to describe the galaxy’s minutiae, The Star Wars Sourcebook (1987), and not even in a “Powerful Darksiders of the Empire” section or anything memorable like that. No, it was under “Assassin Droid”, where we can read an apparently random anecdote about an assassin droid that crashed a shuttle against the Imperial palace of Weerden, killing someone called “Lord Torbin, the Grand Inquisitor”. This character, later given the full name of Laddinare Torbin, was indeed our first Imperial Inquisitor, but the way the sourcebooks described him didn’t have much to do with the creepy dark side enforcer of Star Wars Rebels fame. END_OF_DOCUMENT_TOKEN_TO_BE_REPLACED The first issue of Marvel’s new Star Wars ongoing is in stores today, and it seems like the Marvel announcement was just yesterday. There’s a certain mistrust among the hardcore fans about this comic’s quality and it’s easy to see why: Dark Horse Comics were a class act, one that is going to be hard to follow, and modern Marvel are an unknown quantity for a big chunk of the fandom.

Just who are these guys that are going to be headlining the new canon on a monthly basis in 2015? As we feel that most comic book fans are Star Wars fans, but not necessarily the other way around, we are going to profile a series of single issues penned by the authors of the new Marvel books (that’s what serious comic nerds call comics, “books”, get used to it). We are going to be spotlighting comics that we think could be the most representative of what to expect or, at least, the ones that feel closest to what their Star Wars book might end up being. And we are going to start with Jason Aaron and the first issue of Wolverine and the X-Men. END_OF_DOCUMENT_TOKEN_TO_BE_REPLACED