The notion of a Star Wars afterlife takes us deep into the spiritualism of the Force, but we must be cautious, because the Force is a hybrid philosophy. There are elements of various religions, and it is not solely any of them. George Lucas described himself as a “Buddhist Methodist”, and we see Taoism and Buddhism in the ideas of balance and non-attachment, while concepts like the corrupting nature of the dark side and Faustian pacts echo Christianity, not to mention Anakin’s miraculous birth. Carl Jung, whose theories underpinned Campbell’s heroic cycle, was a devout Christian who also saw the value of Eastern religions. There is even an element of Pantheism, a belief system that rejects organised religion in favor of finding god in nature. Relying exclusively on any of these to “unlock” Star Wars means ignoring the others, as well as Lucas’s personal beliefs and experiences. We have to rely instead on the canon itself.

In “Destiny”, the mysterious Force Priestesses explain to Yoda the duality of the Living Force (the world around us) and the Cosmic Force (the arena of destiny, and presumably the Whills): “When a living thing dies, all is removed. Life passes from the Living Force into the Cosmic Force, and becomes one with it.” There is a symbiotic relationship, as Yoda says in The Empire Strikes Back: “life creates it, makes it grow.” The material world is not a “lesser” place of sin, but an essential part of the whole. To be mindful of the Living Force, Qui-Gon teaches in The Phantom Menace, is to be aware of the world in the present moment, and to help ease the suffering of others.

END_OF_DOCUMENT_TOKEN_TO_BE_REPLACED

“If you strike me down, I shall become more powerful than you can possibly imagine.”

There was little in the original trilogy to indicate that the ability of a Jedi to reappear as a shimmering blue ghost wasn’t commonplace, a natural and inevitable thing that happened after a Jedi’s death. Yet this line from Obi-Wan, combined with Darth Vader’s surprise when he vanishes and leaves only his cloak, always suggested that there was more to it. How could Vader, a former Jedi who fought in the Clone Wars and killed many Jedi himself, be surprised by this? While George Lucas’s mythology grew and developed and was refined as he went along, this always suggested a mystery bubbling underneath the story. That mystery might be the key that unlocks the entire Star Wars saga.

All the Jedi in the original trilogy reappear as ghosts, while the Emperor, the only darksider to die a darksider, is cast into a pit in a violent explosion of energy, as if he has fallen into oblivion. This, combined with Obi-Wan’s taunt, implies something profound about a Jedi’s connection to the Force that those on the dark side do not share. When the prequel trilogy came around, Qui-Gon Jinn died and did not vanish into the Force, raising further questions about how and when the Jedi learned the ability. Ironically, it was Qui-Gon himself who held the key.

END_OF_DOCUMENT_TOKEN_TO_BE_REPLACED 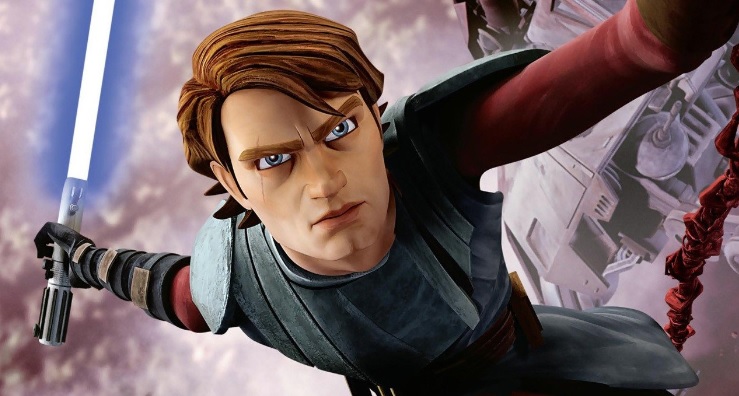 The Clone Wars is BACK. The most surprising Star Wars announcement of recent times has led to an outpouring of love for a series that remains an essential part of our understanding of George Lucas’s universe. Lucas told many more hours of stories in TCW than on the big screen, and one thing that extra time and space allowed him to do was fill in and refine his vision of Anakin Skywalker.

In Attack of the Clones, Lucas arguably showed his hand too soon. With the audience aware of Anakin’s fate, the shadow of Vader looms large, both in Anakin’s “joke” about dictatorships (run, Padmé!) and his heinous slaughter of the Tusken Raiders (RUN, PADMÉ!). The petulant teenage edge and creepy behaviour makes him hard to like, and there is a sense of something fundamentally “dark side” about him that everyone around him is crazy not to see. In Revenge of the Sith, we meet a different Anakin: for the first hour he is heroic, likeable and sympathetic, haunted by the fear of his wife’s death, a pawn in a political game between Palpatine and the Jedi Council. His fall seems to come from a place of good – albeit confused – intentions. Yet it happens extremely quickly. How could he go from “what have I done?” to slaughtering younglings in a matter of moments?

It is the “heroic” Anakin that TCW picks up and runs with. Dave Filoni revealed at Comic Con that his priority in casting Anakin was, above all, “likeability” – the charismatic Republic hero Filoni imagined as a child. TCW Anakin has a square jaw, a noble voice, and is in all respects the swashbuckling hero and hotshot pilot the original trilogy led us to believe he was. We are on Anakin’s side immediately, he’s a hero we can root for – a bit Luke, a bit Han, a bit Poe. From there, TCW adds flesh to the bones of his fall, rooting it not in a fundamental darkness – but in the very things that make him a hero.

END_OF_DOCUMENT_TOKEN_TO_BE_REPLACED

Alan Dean Foster’s novelization for The Force Awakens begins with an excerpt from the Journal of the Whills, which predicts that the cycle of light and dark will be settled by:

“The resolving of grey

The common interpretation (regardless of whether Foster had any insight into a grand sequel trilogy plan, which is doubtful, given no such plan existed) is that the trilogy is taking us into an era where the good-evil binary of the Force becomes more complicated and “grey”, and a new solution to the conflict must be found. But read the poem again. “Resolving” grey does not mean grey is the answer – it means grey is the problem which must be resolved. A closer reading of the sequel trilogy reveals that it may be the clearest portrayal of the battle between good and evil in all of Star Wars.