Lisa: First off we’ll let Jay say some of his initial reactions to the book.

Jay: So in general, I thought this was a great story. At first blush, it seemed like a generic ANH-ESB bridge novel — random adventures of the Big Three, with mostly filmic references. And really, that’s my only major complaint — namely that this is a Big Three story. Leia was a Rebel hero before she ever met Luke and Han, and I really wish we had a chance to see her shine without the other two. That said, Luke doesn’t come in until the very end and Wells had a really fresh take on the Han and Leia romance. Maybe it’s because it’s different or maybe it’s because she’s a female author, but something about it felt more compelling than other authors’ takes on the initial stages of their romance.

Now as I just said, the story was better than the original impression would suggest. I like the high ratio of female protagonists to male protagonists, because it’s something we don’t see often: most generic soldier characters are males in EU works. I also like the way that Wells used EU: there are some nice, unobtrusive references that belie the notion that the Rebels series is not really focused on the EU. Yeah it’s mainly a filmic focus but it’s a filmic setting too — I didn’t think it too casual, or setting the stage for a reboot. I also especially liked the sense of scale, and the drama of the war. The main Imperial villain is a guy in a small customs corvette. He’s small fry — and he’s still a big threat. It gets the scope of the war right!

Lisa: Did you notice any EU references?
END_OF_DOCUMENT_TOKEN_TO_BE_REPLACED

Before we get started, I want to note that there’s been a lot of great Kenobi-related content online this week—both fan-made and official. While it’s the goal of Eleven-ThirtyEight not to get bogged down in reporting every little thing, I do want to quickly shout out two awesome fan reviews—one by Bria at Tosche Station, and one by Megan at Knights’ Archive. Lastly, whether you plan on reading the book or not (though why the hell wouldn’t you?), do yourself a favor and head to EW.com to hear James Arnold Taylor, voice of Obi-Wan in The Clone Wars, read one of the book’s first-person segments in character. It’s magnificent. Anyway, ETE’s own Jay Shah and Lisa Schap received advance copies of Kenobi their own fine selves, so I thought it only appropriate to check in for their thoughts. Enjoy.

Mike: The thing that most stands out to me about Kenobi is that is might be the smallest-scale Star Wars novel ever. Not just in terms of the events of the book, but in terms of the perspectives presented, which are so tightly-focused that you don’t even know the gender of one of the major characters until halfway through. The best decision JJM made perspective-wise was to not actually tell any of the story from Obi-Wan’s point of view, instead only giving the occasional window into his mindset via his first-person attempts to commune with Qui-Gon. As for the plot itself, I feel like the whole thing could be boiled down to the word “parenting”, which is a pretty minor concern for a Star Wars book—no one is trying to take over Tatooine; no one even really cares about the Empire. Even the most outwardly antagonistic character, A’Yark, is also the one with the least power. They may be dangerous, but there is no threat whatsoever that her clan is going to wipe out the Pika Oasis. Thus, the book’s drama comes from how each of these people’s motives clash with the others’—and how even the slightest interference from Obi-Wan can totally alter that dynamic. Discuss.

Jay: The scale is small, but the ideas aren’t — and I think that’s a crucial element that Star Wars has been missing for a while. The post-NJO novels in particular have been stuck in this mindset that seems to think that a big conflict is required to discuss big issues, and that’s clearly not the case. The conflict in Kenobi is about as irrelevant as one gets on a galactic scale: we’re talking moisture farmers on a backwater dustball fighting with a group known pejoratively as either “sand people” or “raiders“. Heck, the farmers are living out in the boonies even by Tatooine standards: places like Bestine and Mos Eisley are referred to the way somebody out in the American west might have referred to glittering New York in the 19th century. Despite the technological advancement of the setting, there’s a clear sense of isolation and distance.

END_OF_DOCUMENT_TOKEN_TO_BE_REPLACED 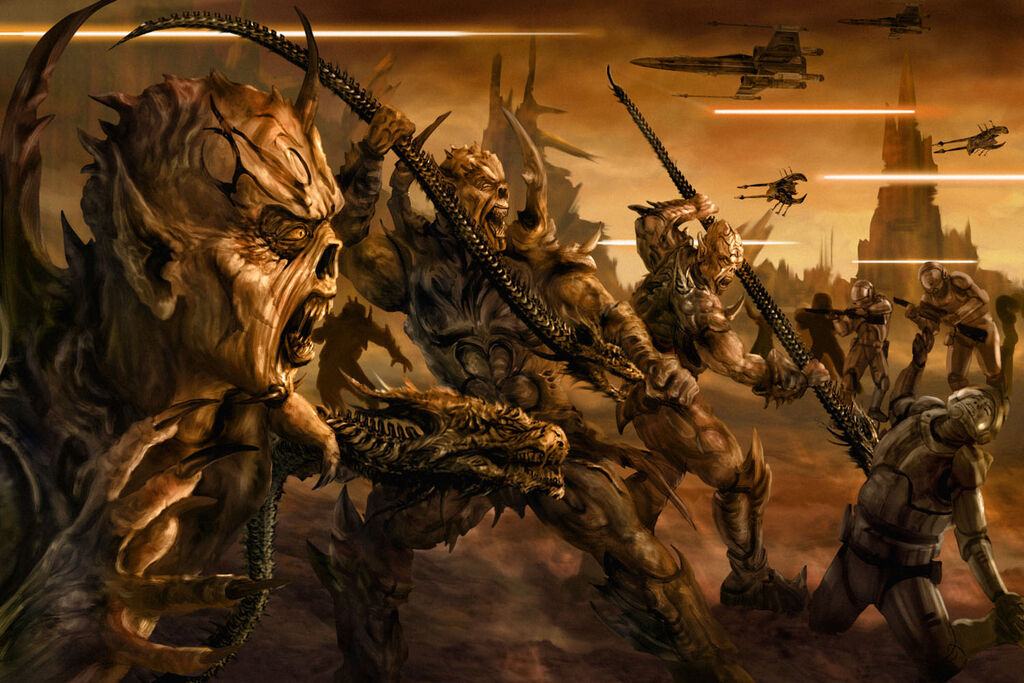 Should the Empire still be the primary antagonists of the Sequel Trilogy, or can the film saga move on and still remain relevant? What can we learn from the Expanded Universe about this?

Mike: While I’ve always been quick to point out how crazy it is to believe that the entire Galactic Empire just folded their cards and went home after Endor, I’m on the fence about whether they should remain the villains of a bona fide Episode VII. On the one hand, I think the New Jedi Order series is hands-down the closest the EU has come thus far to giving us a Sequel Trilogy in terms of tone, and something as wholly different as the Yuuzhan Vong would be awesome on the big screen and would go a long way toward rejuvenating what’s bound to appear to some as a tired, extraneous post-Return of the Jedi status quo, but on the other hand, George Lucas really did tie his story up in a nice little bow there.

The question, really, isn’t do the films need the Empire, it’s do the films need Palpatine? Even Lucas has admitted that if he were to have done sequels himself, Dark Empire—wherein the Emperor returns in a cloned body—came the closest to what he’d have come up with. In fact, given that Michael Arndt is ostensibly working from Lucas’ own outline, it’s entirely possible that a reborn Palpatine will indeed be what we end up with.

I don’t know if we need to go that far, but I can see the argument that the threat has to come from Palpatine in some direct way—maybe a cult of rabid non-Sith followers sowing dissent, maybe even a crazed and manipulated Jedi like Joruus C’Baoth. If the Prequels were about the Republic crumbling from within, and the Classics were about the ideals of the Republic rising anew, then the Sequels need to be about demonstrating that new Republic’s fortitude, and most importantly, showing that it—and our heroes—have learned the lessons of the Prequels and created something better, in terms of both the government and the Jedi Order. Anything that doesn’t deliberately and aggressively make that case—whether it’s more Sith, Imperial remnants, or an alien invasion—won’t truly feel like the same story. Jay, am I right?