Thanks once again to Pearlann Porter, my endless font of Star Wars questions.

10. Who was the persuader/catalyst for engaging with Luke, Obi-Wan or Qui-Gon?

It was the plan all along. As of Revenge of the Sith, Yoda had already been communing with Qui-Gon for some time, so to what extent Qui-Gon talked him into what eventually became The Plan is hard to say. Also hard to say is how Ben would’ve handled Luke had the droids not shown up when they did—it’s hard to imagine him just knocking on the door one day and trying to take Luke off for training.

But what we can say is that training was definitely in the cards all along. The RotS novelization is indispensable in this area, as it’s the best (and basically only) guide for what’s going on in Yoda’s head at the end of the movie. Basically, after proving unable to best Palpatine in their Senate fight, Yoda comes to the realization—again, having been nudged in this direction by Qui-Gon, in all likelihood—that the Jedi Order that he and Obi represent just isn’t equipped to handle the Sith that Sidious and Vader represent.

Think of it like iPod versus iPhone—The Emperor is a new paradigm that developed specifically to exploit the Jedi’s weaknesses. He’d been working to that end for decades, really, but the Clone Wars are by far the best single example of this. In Phantom Menace, the Jedi barely want to get involved in the invasion of Naboo, but the second the institution of the Republic is threatened, it’s “General Windu” this and “Commander Skywalker” that—the Order was a slave to the system, so when the system is run by the enemy, they officially run out of moves to make.

This is what finally dawns on Yoda at the end of the movie—even if he’d somehow killed Palpatine, and Obi had somehow killed Anakin, the entire government was still screwed, and Supreme Chancellor Yoda was hardly the answer. So when the twins show up, phase one is to hide them, of course, but the reason they go to Bail Organa and the Larses instead of being raised as good little dogmatic Jedi by Obi and Yoda is because dogmatic Jedi were the problem. The new-model Jedi, Yoda recognizes, need to be grounded. They need to be raised by loving families first, and trained as Jedi second.

Further reading: Revenge of the Sith

11. What happened to all of the Star Destroyers, etc in the sky above Endor after the second Death Star was destroyed? Did they just retreat? Surrender?

Good eye. One of the big arguments in favor of the Expanded Universe’s version of the fallout from Endor, versus the Return of the Jedi Special Edition’s ending where the Empire just kind of…stops? is the implausibility of a gigantic war fleet, that far outnumbered the Rebels even after Endor, just turning over the keys to their AT-ATs and going home. 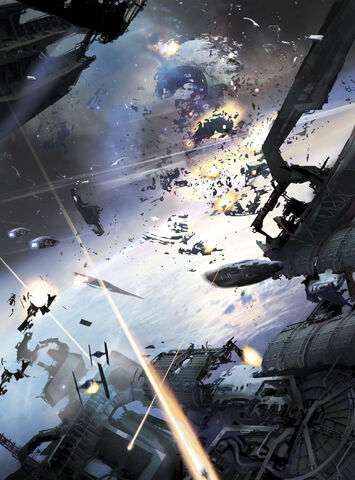 The short answer? Anarchy. The Rebels landed more ground forces, who promptly mopped up the rest of the Imperials on the forest moon. They took control of an ion cannon (like the one covering the escape from Hoth) and started taking potshots at the still-fighting Star Destroyers. Meanwhile, Han and a few others put the shuttle Tydirium to further use and were able to infiltrate and capture another ISD themselves. That wasn’t an official Rebel mission, mind you; Han just felt like it.

Up in space, command of the Imperial fleet had passed from Piett to Admiral Harrsk on board the Chimaera. As the battle went on, Harrsk succumbed to some…medical problems, and command went from there to the Chimaera‘s captain, Gilad Pellaeon of Heir to the Empire fame. Being a shrewd guy, and seeing the utter disorganization of the fleet (don’t forget, they were also under some degree of Force coordination until the Death Star’s destruction), Pellaeon called the retreat and salvaged the bulk of the remaining forces.

One notable holdout was Grand Admiral Teshik, who fled the Death Star itself before it blew and attempted in vain to rally the fleet himself. Pellaeon’s bunch left him behind, and he fought on alone for three more hours before finally being captured.

For the Rebels’ part, a fifth of their entire fleet had been lost in the fighting. While a great deal of Imperial ships still remained, their leadership splintered further and further, some retreating to Imperial strongholds in the deep core, and others returning to their home sectors to carve out little fiefdoms for whichever Admiral or Warlord they were unlucky enough to answer to.

Further reading: The Essential Guide to Warfare, The Deposition of General Solo, Who’s Who: Imperial Grand Admirals, Imperial Warlords: Despoilers of the Empire

12. Was The Force in play at all to bring Threepio and Artoo to Luke on Tatooine?

This gets a little bit away from the Expanded Universe specifically, but it ties in nicely to #10 so I wanted to spend some time on it.

It’s easy to just say “yes” to this and not dwell on it. The rational answer, of course, is that Leia was going there anyway—Luke was only a short way away from Obi-wan’s home, so it’s not too unlikely that they’d have ended up at the Lars homestead like they did.

The more substantial answer, though, is that the Force is in play with everything that happens in the movies.

It’s important to keep in mind that Star Wars is a fantasy—or a space opera, or whatever term you want to use—rather than genuine science fiction. Ever since JJ Abrams took over Episode VII, fandom has been abuzz with the possibility of a continuity reboot akin to what Abrams did with Star Trek. Will a reboot happen? Probably, but whatever form it takes, in my opinion, the EU won’t be written out of the story in-universe—it will simply be disregarded entirely.

This is because, as vital as continuity has been to this fan’s appreciation of SW, the thematic trappings of the story are more important—and primary among those is destiny. Even before the prequels introduced the Prophecy of the Chosen One (gilding the lily, if you ask me), the GFFA was fundamentally a deistic universe in a way that Trek just isn’t. The Force is an omnipotent entity in this story, and whether or not it has wants and desires on a conscious level, you can say with pretty high confidence that the story of the films is supposed to happen. Every lucky shot, every coincidence, every beating of the odds is not just lazy writing (though it can be that as well), it’s baked inextricably into the premise.

It’s fun to think about what-ifs, I admit—the Infinities stories did it, Star Wars Tales did it, and even I do it. My personal favorite tipping point, where the entire story could have gone another way, is the guy on the Devastator who decides not to shoot the droids’ escape pod. As Family Guy put it, what are they, paying by the laser?

But in terms of the Big Story, you simply cannot apply the Butterfly Effect to SW. That guy didn’t shoot the escape pod because he wasn’t supposed to, just like Artoo and Threepio were supposed to end up in Luke’s front yard. The film saga isn’t happenstance, it’s a series of dominoes that were stood on end millennia ago for just this moment. But you have to admit, the falling is still pretty awesome.

Further reading: The Journal of the Whills