When the Emperor ordered the Jedi exterminated, he instantly turned the galaxy-wide war against the Separatists into a sideshow and brought the entire Republic under his personal dominion, to be shaped as he saw fit. Everything changed. The galaxy became a darker, more materialistic place. The Force became a forgotten term for an outdated and mocked religion. The Jedi were whispered about in the dark for a time, then slowly forgotten. What few Jedi survived the purge live a lie, hiding in such deep, dark places from which they might never emerge. An entire generation of beings emerged who were raised in a galaxy without its brightest light.

Rebels, despite its humorous bent, darkens its tone considerably as it explores this reality. “Rise of the Old Masters” showed better than any episode yet what that sort of galaxy would be like, where even the rumor of a Jedi brings some of the galaxy’s most dangerous beings to the scent. It showed that the Jedi are something that the Empire simply will not tolerate, putting a system in place designed to ensure that Order 66’s legacy will continue. It also showed that the heroes of the show will constantly be hunted, hounded, no matter how successful their rebellion winds up being.

Kanan taking Ezra as his apprentice is an almost suicidal risk. Card after card is stacked against them: the Imperial Security Bureau oversees life across the Empire, watching for anything out of the ordinary and ready to crack down with extreme prejudice; the Inquisitor (and perhaps others like him) devote their lives to hunting ex-Jedi, Jedi candidates or even the Force-sensitive; Luminara Unduli is kept somewhere between life and death as a trap for anyone else claiming the Jedi heritage; the Empire’s forces and resources are nearly limitless, and beyond all of them wait Darth Vader and the Emperor himself.

But in making Ezra his padawan, in taking up his lightsaber again, Kanan is doing more than just making himself a target. He is, in no small way, repairing his own soul and, in the process, adding a bit of light back to the galaxy. The Jedi strive for balance, for control and harmony. Things Kanan, and the galaxy itself, sorely lack. And in taking Ezra in, he saves the boy from an even worse fate at the hands of the Empire. If it had been the Inquisitor or Agent Kallus to find him first, Ezra could very well have become the Empire’s next Force-sensitive assassin, or even another inquisitor himself.

While Ezra’s ultimate fate, and the fate of his master, remain very much in flux as the show progresses, the presence of Jedi in some form was inevitable. Star Wars is connected to lightsabers in the same way Star Trek is to transporters, or Batman is to his batarangs. After the Jedi-heavy The Clone Wars, however, having the Jedi used so sparingly, and with such care for their impact on the galaxy at large both for good and for ill, is a necessary and dramatic change. It helps set the stage for the rise of the galaxy’s greatest Jedi one day by showing just how dark the Dark Times could be, even in a show meant for children. 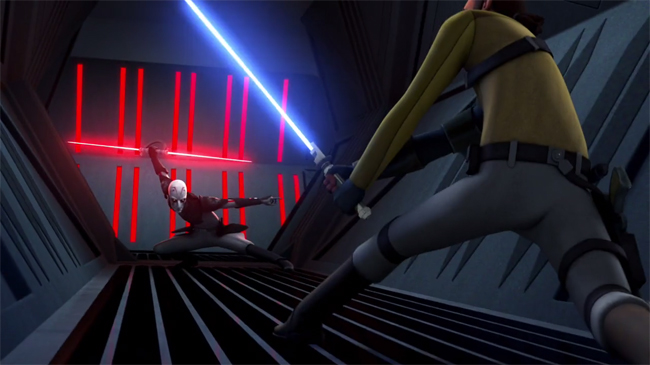 Jay: Instead of rebutting, I am going to agree with my colleague here. More than that — I have to underscore how crucial the point is. I took this episode to be something like the inverse of a jumping of the shark moment: I’d enjoyed the show before, but this is the moment that I looked at the show and the creative thought behind it and thought “you know, I think they have something here.”

The ingredients were already in the right place. I — along with many others — was deeply concerned with the presence of not only a Force-sensitive little punk like Ezra, but the presence of a surviving Jedi padawan who was formally trained. He’s not a Knight, but he has a distinction that few left in the galaxy have. The concern was that this would undermine the dramatic heft of the Original Trilogy, which was in many ways the heroic arc of Luke Skywalker just as much as it was the redemptive arc of Anakin Skywalker. The Rebellion and all that it stood for relied on Skywalker because he was a Jedi. His training was incomplete, his technique rough and driven by instinct more than skill, but he represented such an important element of the Rebellion’s struggle that Kenobi and Yoda wondered if there was any hope without him. Skywalker didn’t know if he could redeem Vader in Return of the Jedi, so he made sure to prepare his sister to take over that mantle for him just in case he didn’t survive. There was no one else.

We worried that despite its otherwise promising cast and small-scale adventure premise, the presence of these two would-be Jedi would undermine the dramatic heft of the saga. Perhaps the Prequel Era’s inability to think beyond shiny lightsabers and cookie-cutter heroes (dare I say clones?) would raise its ugly head again. We received some signs that it might not — John Jackson Miller’s precursor novel to the series, A New Dawn, presented a flawed Kanan that alleviated concerns that he would be this shining hero on a pedestal. The seriousness in which Spark of Rebellion handled his lightsaber reveal also suggested that the creative team was taking seriously the significance of having a Jedi on the cast during the Dark Times. But it wasn’t until this episode that we knew that everything would not only be all right, but that it could be really, really good.

To be a Jedi in this time period, as Ben says, is to be hunted and hounded. It’s not glamorous: but it’s still a necessity. They may well die doing it, and this episode showed how easy death would be at the hands of the Imperial Forces. Being a Jedi isn’t a safe thing, it isn’t a video game cheat code. It’s a death sentence. Kanan knew this when he joined Hera’s merry little crew, and he especially knew it when he ignited his lightsaber for the first time in forever. Ezra had a dose of reality too: this life he seeks isn’t going to be easy, and it isn’t going to be fun and games like he might have thought.

Many people complained that the Jedi we saw in the prequels were too stodgy and self-interested. Freeing slaves? They had no time for that. Saving Naboo? Not in their mandate. Serving the Republic in wartime? Not really their thing. Some — even those not inclined in particular towards the Imperial point of view — actually wondered if the end of the Order wasn’t entirely a bad thing. The Jedi we saw in the prequels were very different from the Jedi of the original trilogy, and the Jedi of Rebels provide that important bridge.

By showing that the journey isn’t easy, but that it’s still one worth making — Kanan and Ezra earn their place in the cast, and the team behind the show prove that they know the stakes. Moreover, they underscore all the more how impressive Luke’s achievements actually were. If a trained Jedi in the old school could falter against one of the Emperor’s agents, how much greater was Luke’s journey from a farmboy to the vanquisher (sort of) of Lord Vader? If a small movement against a small part of the Empire could attract this much heat, how much more trouble was the official Rebel Alliance in? In the span of a single episode, we know exactly how serious the stakes are and how important their choices are. That’s a big thing to do in twenty-some minutes.