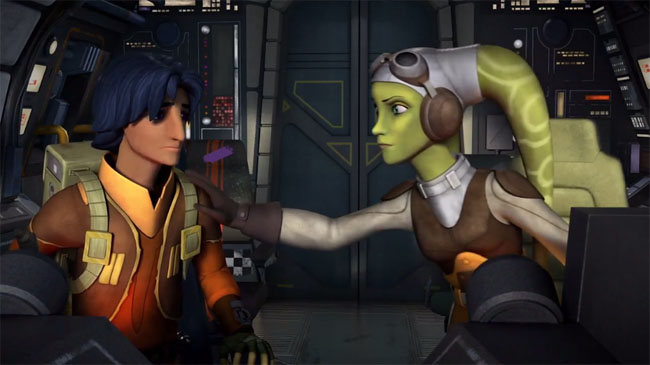 What drives the spark of rebellion? What brings beings to the point where they openly defy the galaxy’s one major ruling power? For one Ezra Bridger, it was just a game, something he did to get enough food to keep his stomach happy until the end of the day and make fools out of the men in white armor. Life, for him, is lived in the now, in what he does from day to day. He has no plans, no future, nothing to look forward to except possibly stealing something worthwhile that he could sell on the black market to get enough credits to buy a slightly nicer meal. His rebellion is less about fighting the Empire and more about being independent.

When Ezra first meets the crew of the Ghost, he assumes that they are like him: thieves, albeit very skilled and coordinated ones, who are stealing to survive. He soon finds out that, while some of their activity is for profit, just as much is altruism, for helping those outcast and neglected, if not outright repressed, by the Empire. It understandably rocks his world. People, he insists, don’t do that.

The discussion he and Hera have on the matter, however short, still manages to cut to the heart of the matter. Hera insists in her calm but intense way that without finding a higher cause, without finding something to live for more than just the next meal, or the next day’s heist, the young Lothal native may as well not be alive at all. And despite his insistence that he does not care about the fate of the others, his actions prove lie to his words. Something about their cause, their drive, draws him in like a moth to flame. It is not simply sticking it to the Empire, it is doing so with a greater purpose, a goal, a plan for the future.

Even without going into the will of the Force or destiny’s role in Ezra’s survival alone on Lothal, or speculating on what the future might bring for him, his seeking out that purpose beyond mere survival ultimately leads to him joining the Ghost‘s crew to widen his perspective beyond his home planet. Even when Kallus captures him, he does not expect them to return for him. He did not expect the ones who browbeat him and took his haul to return to save him in the face of an Imperial Star Destroyer.

But they did. It was not a unanimous decision, but everyone did go along with Hera and Kanan to rescue Ezra from a fully operational Star Destroyer, even Zeb. But why?

The same drive to fight the Empire, fueled by a variety of tragedies in everyone’s pasts, is also what keeps the crew together, beyond simply wishing to hurt the Empire however they can. Everyone aboard the Ghost (barring maybe Chopper) has their own reasons to turn against the Empire. But they also know that, by banding together, they can do more than kill a few Stormtroopers. They make a difference. They can make life better for some parts of the galaxy who suffer under the Empire’s rule. And Ezra, despite his and the crew’s reluctance, can be a part of that.

In the end, Kanan offers him a choice: keep being a street-rat, scrabbling for survival and trinkets, or become a part of the crew, and more, a Jedi. Ezra goes with the Ghost. His first trip with the crew gave him a taste of what life in a crew, a family, united by a common purpose, could be, and he wants to keep with it. He wants his destiny to be more than to die alone and forgotten on a backwater planet. He wants to learn, to grow, to be a part of something bigger. Something more than just stealing and running, living life hand to mouth. Especially if that means rebellion against the Empixxx887&^^

HOLD FOR AN IMPORTANT MESSAGE
FROM COMPNOR AGENT JAY SHAH

What do sparks do? They light fires, and fires are dangerous. Some people devote their lives to putting out these fires, but unlike the real life, these metaphorical firefighters have a thankless job. Their job is even more complicated by the fact that their work is not only unappreciated, but actively fought by those on whose behalf it’s performed.

Who am I talking about here? I’m talking about Agent Kallus, of the Imperial Security Bureau. Those of us who know the ISB from the old EU are familiar with it as a sort of FBI-Gestapo hybrid which was part sinister, part comical. Its goal then and now was to root out security threats to the Empire, but under the old EU it was an incompetent, ideological, and idiotic second-fiddle to the far more dangerous Imperial Intelligence. Things have changed and Kallus just oozes competence in this episode. But why is he worthy of praise? He is, after all, the villain. 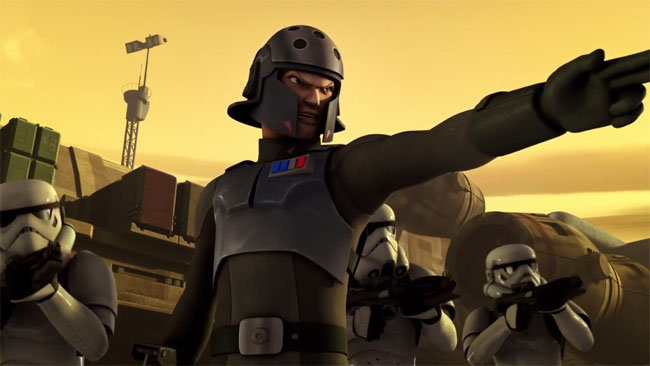 Yes, he’s a villain who serves a Sith Lord – but he doesn’t know that. That’s the important part about all this; from his perspective, the galaxy went through its most brutal conflict ever within living memory and he is doing anything he can to prevent that from happening again. He says that his goal in coming to Lothal is preventing a single cell from turning into a spark of rebellion – because sparks cause fires, and he’s already seen what the spark of separatism has done to the galaxy.

The Imperials on Lothal are a curious bunch. Their propaganda posters and Holonet News transmissions claim to have brought prosperity and jobs to Lothal. Future episodes will tell us if that’s the truth or a distortion, but we can see some disturbing signs on Lothal. Stormtroopers are hassling a fruit vendor – possibly legitimately, since selling agricultural products without a license can be dangerous – but their officers seem to enjoy it a bit too much. We also see a slum known colloquially as “Tarkintown” – we don’t know why these people had their lands seized, but the audience is rightly sympathetic towards starving people who have been driven from their homes.

But let’s not forget Kallus has nothing to do with any of this. He arrives from off-world to deal with a particular problem, a problem that could spiral out of control for the galaxy. He is duty-bound to prevent that from happening – and duty seems to be his watchword. Kallus could not be more different from the arrogant Imperial officer who started munching on the fruit merchant’s wares with impunity, enjoying the alien’s misery almost as much as the taste of the fruit. No, for Kallus it’s not about personal enrichment or pleasure.

How do we know this? When Kanan Jarrus – member of this seemingly minor, Outer Rim cell – reveals that he is some sort of Jedi, Kallus realizes this problem is far more serious than he had previously imagined. Now, Kallus has trapped them once and could do it again – and the personal glory and advancement for a man who has defeated a Jedi is probably great. Instead of reward, Kallus thinks of duty – he calls it in, reporting not only his failure but the fact that he needs help. As we know from the films, the Empire does not treat failure lightly; but here is Agent Kallus, risking his neck because he knows that a rebel cell with a Jedi could prove very dangerous to galactic peace. He makes this decision because he has a duty to save lives – a duty that is very certainly larger than himself.

Dear Audience: I’ll be appending my thoughts to “Rebels Revisited” from time to time, generally when I have something different to say from Ben. Often, I’ll write about the Imperial perspective but I’ll vary that up too. Like my regular pieces for “Imperial Court Circular,” my contributions are intended less as pro-Imperial propaganda and more as a “second look” at what the protagonists and antagonists in Rebels are up to. I think the show lends itself well to that – it’s clear who the villains and who the heroes are, but the former are not perfectly evil and the latter are not perfectly good. I hope that my contributions enhance your enjoyment of the show.