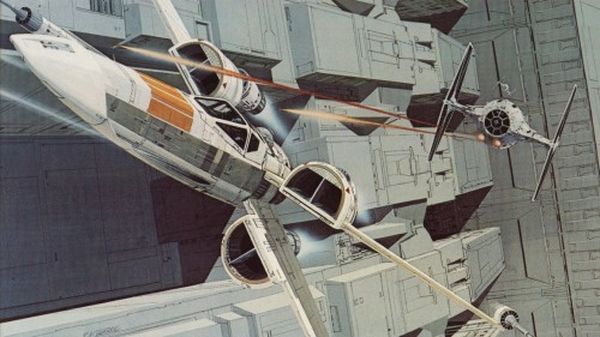 As a 31 year old fan who encountered Star Wars as a young kid via VHS tapes and had his love of it sustained by the Expanded Universe, the sight of a Rebel base is exactly what Star Wars is all about. The set has all the familiar elements of Yavin Base, Hoth Base, and the hangar on the Rebel flagship Home One. When I first saw these images, I felt a level of excitement for Star Wars that I hadn’t felt in a long time. My beloved EU had died a slow and painful death, so my interest in Star Wars (well, at least in new stories) was dying too. The announcement of the Sequel Trilogy changed all this. Suddenly, there was that old excited feeling and the sense of wonder.

So, let’s break down the elements we see at this presumed Rebel/(New?) Republic base. The most exciting and obvious are the starships, especially the Millennium Falcon. Rough and ready as always, the Falcon now appears to be sporting a few red markings that have caused a bit of speculation among fans. The very sight of that “bucket of bolts”/”fastest ship in the fleet” probably means that Han Solo and Chewbacca are somewhere on base as well. And no Rebel base is complete without starfighters. Not just any fighter, but the iconic X-wing fighter.

A newer model, harkening back to old Ralph MacQuarrie concept art, seems to be the main fighter for the heirs of the Rebellion. In one of my older articles on this site, I spent some time detailing what EU craft would be at home in this new movie. In that article, I mentioned how it would be very difficult to not use the most iconic Rebel fighter in the Sequel Trilogy. While it is now clear that this temptation was indulged, I would be lying

if I didn’t say I am surprisingly happier than I thought I would be. The second I saw the new X-wing, resplendent with her new sleeker features and blue markings, I fell in love. I was transported back to a simpler time when I was a young boy running through the yard with an X-wing model, or conducting a fleet battle with my Micro Machines. I will forego speculating on the black & orange X-Wing fighter seen on set, other than to say that apparently gray hulls with red markings are not the only paint jobs anymore!

The base has more than just a Corellian freighter and a squadron of X-wings. The costumed characters we have seen so far also harken back to classic Rebel looks. We have seen fighter pilots in reddish-orange flight suits, troopers in various khaki uniforms, and flight crew/base personnel wearing uniforms that would be at home on any Rebel Star Cruiser or base from the OT. What stands out most of all is the simplistic beauty of the costumes. Not super flashy, not super fancy, but evoking the spirit of the OT. Some online fans have noted that the costumes have a vaguely Naboo Guard look to them. While I am not entirely sure I agree, those costumes were among the best of the Prequels, so no complaints from me. Lastly, stacks of crates, fuel lines, maintenance vehicles, crew transports, and other things still to be identified out the finishing touches on the base and make it look real and feel used.

We still have over a year before Episode VII hits the screen. We will undoubtedly have additional rumors, leaks, and plot assumptions before we finally get teasers, a formal trailer, and an actual plot synopsis. However, this recent batch of images excites the imagination and transports many of us back to our youth. After all, isn’t that part of the magic of movies?

Hmm, maybe I better dig out my old X-wing toys…