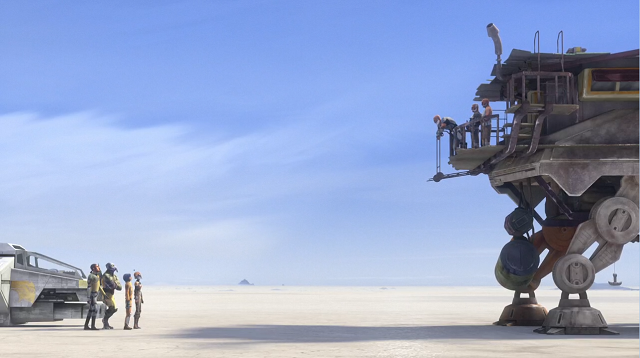 Ben: Sometimes long-form storytelling doesn’t work out. For example, when The Clone Wars was canceled after five seasons on the air and a movie, it still left many plots and characters hanging. Many fans assumed that there would be no resolution to these things, and not without reason. With new movies in the post-Return of the Jedi era emerging and Rebels taking TCW’s place, a new focus on the original trilogy era seemed poised to doom characters like Ahsoka, Ventress and Rex to obscurity, perhaps not for forever, but for a very long time.

Fortunately for the legions of TCW fans out there, there has been a steady, if much slower than previously, flow of information, references and details from TCW postmortem. Starting with the “Lost Missions” from the unaired sixth season being released on Netflix, we’ve had story threads picked up by a comic series, a novel, and now in Rebels, each one giving us a few clues as to what would have happened if the show had continued into seventh or even eighth seasons.

But what about after the end of the show? Even if the show had continued, there would still have been an end, likely corresponding with the events of Revenge of the Sith. So what would become of those characters in the years after the Republic and Separatist Alliance had collapsed?

We got a small taste of this when Ahsoka’s identity was revealed at the end of the first season, in that she had somehow signed on with the fledgling group of rebels that were funneling information to Hera and the crew of the Ghost. But what about the clones? Rex and his brothers were some of the most fleshed-out characters in all of TCW, but we really have never seen what would happen to them after the war they were bred for was over.

The Clone Wars as an era is rich with potential characters to be referred to and brought back (how long until we see Cad Bane in some capacity?). But using the clones in Rebels allows a unique and hitherto-untouched perspective on things like Order 66 and the rise of the Empire to come to life. We get to hear the perspective of the victors, rather than simply the victims, and see what happens to some of the clones after they become too old to fight.

A worry might be that Rebels is turning into TCW 2.0, with its own characters overshadowed by the cast of the previous show. “The Lost Commanders” shows that, as with the guest appearances by other characters in the first season, the Rebels cast can hold their own, and the developments that naturally occur when the two sets of characters collide make for entertaining, amusing and compelling viewing.

Rebels’ portrayal of the clones stands on its own to some degree, but means much more when you know who these soldiers were and what they did once upon a time. The conflict between Kanan and Rex, the mistrust rooted in history, is that much more potent when you’ve seen what happened to Kanan in the comic that bears his name. Of course, we’ll get into that more next week as the conflict between the clones and the Empire comes into focus.

It’s this sort of synergy that a fictional universe with one continuity can really provide, and it’s the sort of development that reminds us that no, those characters didn’t disappear from the face of the universe with TCW was canceled. There are still stories to be told here. And there are still characters that have some life in them before they disappear into the annals of galactic history. 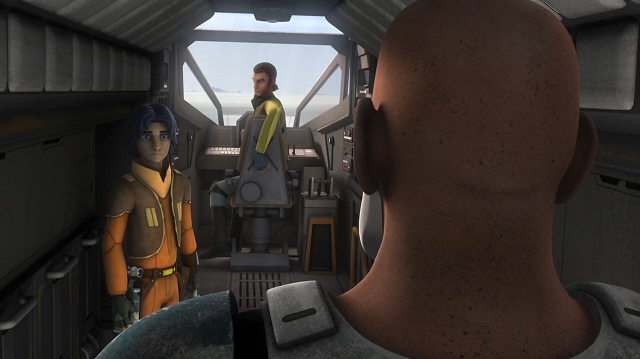 Mike: Recently Jay and I were discussing the tonal differences—or perhaps the lack of them—between The Clone Wars and Rebels, and I’ve now seen a few people observe that this “felt” more like a TCW episode than Rebels. But while TCW’s actual content was obviously way more variable by dint of its huge cast, for me this episode underlines how tonally similar both shows actually are; it was lighthearted compared to the last several episodes of Rebels, certainly, but no more so than something like “Fighter Flight” last year. And with the Empire’s arrival next week, I expect something much more intense and in line with TCW’s grittier arcs—except here we know all the characters, even the clones, more intimately than we tended to in Rebels‘ precursor series, and will be more invested in their survival.

Jay, does this heavy of a TCW influence in one episode feel like a tonal shift for Rebels, or are the two series more similar than we sometimes care to admit?

Jay: So — I think people are a little too hung up on the stylistic differences between Rebels and The Clone Wars. I think I’m one of them. I was hit or miss with TCW, thinking it was really enjoyable at points and really kind of bleh at others. I loved it most when it was closer to the OT, which is why I liked it the further as it went. Rebels, of course, is thoroughly OT inspired — it has that classic, McQuarrie feel to it, after all! But I think focusing on musical cues, art direction, and everything is misleading.

They’re all significant, of course. I love the music, art direction, and overall style of Rebels as I love the OT.

But there are some fairly significant similarities to TCW and Rebels. One is the character development — TCW actually did a fair bit to develop characters. Characters given short-shrift in the films, such as the clones or even Jar Jar, got attention in TCW. Rebels does the same thing, focusing on character development and (we hope) characters who don’t usually get developed as well such as women or aliens. The use of character development is just more apparent because the cast of characters is smaller. Another similarity is the depth of background art and scene-setting. Yet another is the complex view of morality, despite the hokey fables at the start of each TCW episode.

Of course, there are some differences too. One is scale — TCW featured a galactic war, with a broad cast of characters, and had immense stakes involved. Rebels is more intimate, often described as feeling similar in tone to a West End Games RPG campaign. There’s a small party of characters and there are recurring antagonists. The stakes and scope change in the second season though, and so it’s natural that folks feel like it’s too much like TCW. But here, I think the similarities are more apparent than real: Rebels is expanding in scope but it will never become the same kind of war we saw in TCW. The story just doesn’t allow for it.

So all in all, the two shows are unique but have similarities in key areas. People may have a preference for the style and characters of one or the other — I sure do — but it’s not warranted to say that TCW is seeping into Rebels. It was always there.