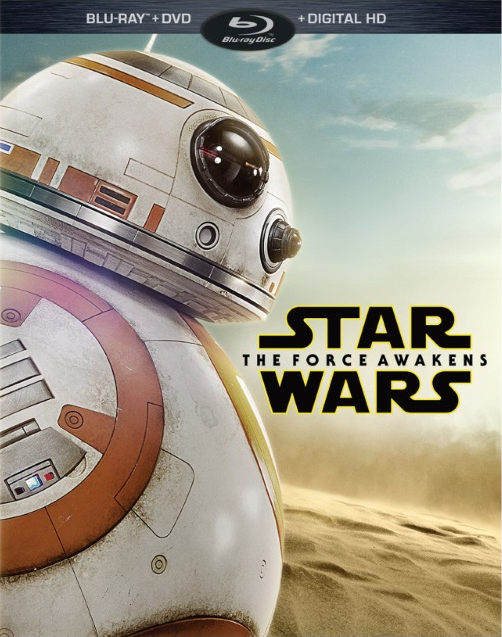 Mike: When it comes to home video, Star Wars fans have never been starved for options. Indeed, you’d be hard pressed to find a fan over a certain age who hasn’t at least bought the original trilogy multiple times just to keep up with modern formats—on top of which you’ve got Special Editions, box sets, new individual releases with the original cuts included, etc. And that’s just the old movies; now that we’ve got a new Star Wars film every year for the time being it looks like there are several options to consider with each: DVD, Blu-Ray, 3D Blu-ray, digital download, and if The Force Awakens is any indication, another fancy deluxe set at the end of the year with all the special features they didn’t include the first time.

With the digital Rogue One having been out for a couple weeks now and the hard copies showing up tomorrow, what calls have you guys been making amidst all these options? As if the different formats weren’t enough to keep track of, TFA and Rogue One both come in a few different slipcovers exclusive to different retailers, and wouldn’t you know it, I happened to fall in love with the neat-o BB-8 cover at the top of this article, which meant dragging myself to Walmart of all places, for the first time in several years. While it’s a bit more of a trek for me than Target (or Amazon, obviously), now that it looks like that character-focused style is going to be a recurring design thing I guess I’ll be going back to Walmart this week to pick up Rogue One. What about the rest of you? Do any of you actually buy multiple copies, to take advantage of the earlier digital release, or the better bonus features later on?

Jay: I always go for the Blu-ray, and it’s for the simple reason that I want to see Star Wars films in the best way that I possibly can. Right now, that’s Blu-ray on an HDTV. Of course, sometimes I just want to watch the movie and I can’t be bothered so I’ll watch it on the computer or phone or whatever else but that’s the trick: the Blu-ray already comes with a free digital copy, which is redeemable at the distributor of my choice (and through Disney’s rewards thing, through multiple distributors). I’ll also watch the digital version when I want to take screenshots, because while I own a BD-ROM drive as well, PC BD-player software annoyingly doesn’t let you take screenshots (and moreover, PC BD-player software is largely garbage).

That’s really my bottom line. There’s no reason to get the digital version separately otherwise, unless I’m too impatient to wait two weeks (which, to be fair, it sometimes feels like that’s a possibility) or if I don’t care about the quality difference between digital HD and less-compressed Blu-ray. Usually the digital releases will have the same special features as the physical ones, except for retailer-exclusive versions (like Target) which I usually can’t be bothered with.

This time? Definitely Blu-ray, though I think I’m going to go to a brick-and-mortar store because a certain retailer named after a river is in some sort of pricing dispute with Disney.

Also, I do sort of wish that preordering a physical version would entitle you to redeem your digital version when the earlier digital release date occurs but I understand the logistical issues preventing that. But that’s fine. 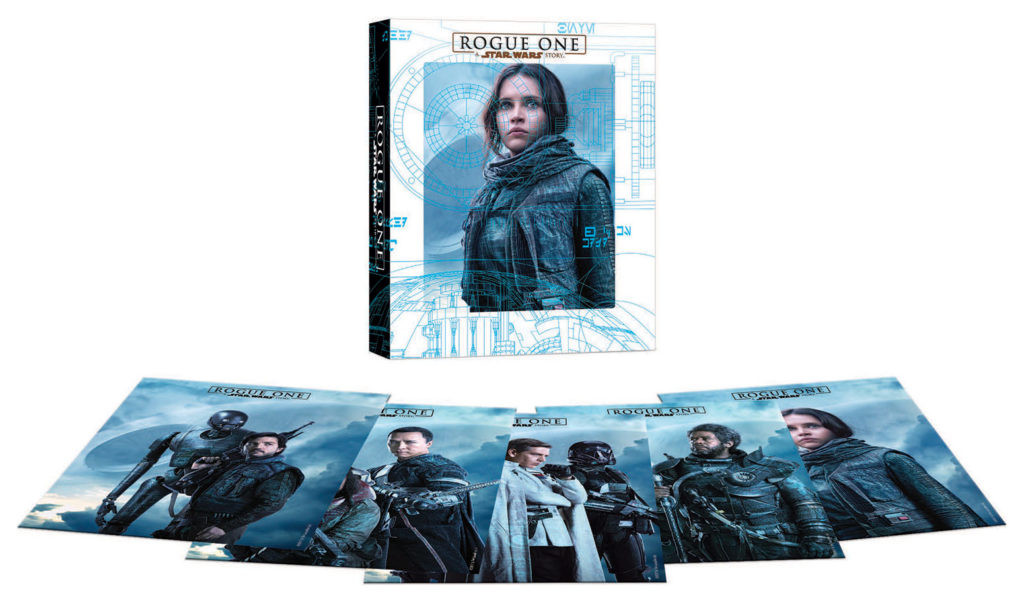 Nick: Blu-ray is the way to go. Like Jay, I want to enjoy it on a TV with the room dark. I’ve got a 60-inch HDTV and it is fully armed and operational for Rogue One. Also, as a bit of a collector type, I enjoy having the movies. I don’t display my DVD/Blu-ray collection anymore, but I enjoy opening the cabinet and seeing my library of entertainment. Sure, I suppose I could watch the digital copy (and it IS handy for grabbing screencaps of shots that you want to analyze, like the Rebel Fleet over Scarif), but it’s just not worth the extra coin to me initially.

Ben: This will be my first Star Wars Blu-ray. Why not get the BR set of the six films? Well, some guy went and took a dump over his own work, citing artistic improvement. To invoke Tony Stark, I respectfully disagree. So that remains not bought. Rebels / Clone Wars? Wasn’t convinced of the benefit of BR for them.

When I buy Blu-rays I’m looking at the type of film it is as much as the format. You might have a brilliantly scripted tale of two people talking in a room, with a pair of very good actors the film probably turns out great, but does it follow it would be better on BR compared to DVD? Probably not. In contrast, Rogue One pretty much demands I buy it on BR for the scale of the effects and visuals.

Although, I have noticed that BR will tend to have more extras than DVD edition, so, depending on the film, that’s a factor. Though I can’t say I’ve ever cared much about deleted scenes. Reworked into a Director’s Cut? Definitely, but on their own? No, which is just as well because the imminent Rogue One BR release doesn’t have them.

Streaming? Requires a decent and totally reliable internet connection, the one we have suffices for internet and sometimes Amazon Prime, Netflix and others are more unstable.

The other element which requires physical format for a decent job is subtitles. Both my wife and I have been using that for ages, it was all The West Wing‘s fault, but it does make things easier. BR edition subs tend to be very good.

In terms of where to buy and how – hey, I’m in very-soon-to-be-Brexit-Britain, cheapest wins. If that means buying from the Galactic Empire, so be it.

Jay: We thank you for your custom. 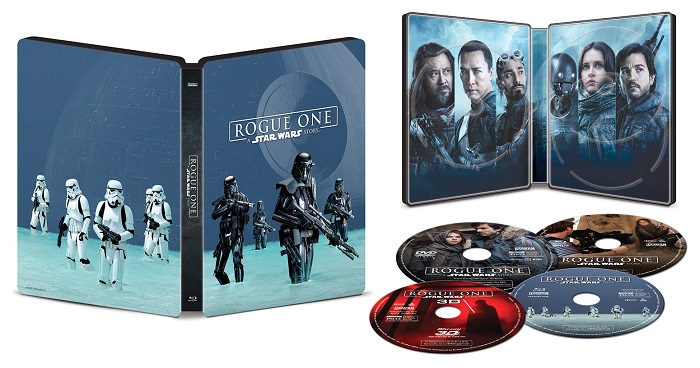 David: I’m very patient with home media these days. With video games, I’ll usually wait one whole year so that I can get it fully patched and often with extra DLC. With Blu-rays (and DVDs before) it’s the same: I know that we are bound to get further releases and I can easily wait to buy the home release of a movie I’ve seen in the theaters already.

With Star Wars I’m different. I don’t know if it’s out of loyalty (corporate loyalty? ugh) but I usually buy the physical format the very first day, maybe because I feel a bit of a collector’s impulse or because I want to be be able to get clean screenshots to make stupid photo-collages as soon as possible. I only acquire digital copies if they are included as an extra with the physical copy, probably because I’m old and it’s hard to get me to learn new tricks (I still look at eBay with mistrust). Oh, and, unless I just have to do it because of format obsolescence or if I find a ridiculously good sale, I never buy a movie twice. BTS and author commentary tracks are nice, but I rarely watch them more than once, so not worth a full sale.

So, in summary, I’m old and crotchety.

Mark: I’m a late-adopter when it comes to just about any technology, so I can honestly say I have never downloaded a film, or watched a film from a streaming service. I’m sure by the time I get Netflix, the rest of you will be having movies injected directly into your dreams or something. I’m the same with books – I’ll always choose a physical copy over an e-book where possible, because I’m just weird and old-fashioned that way. Librarian’s instinct, I suppose. 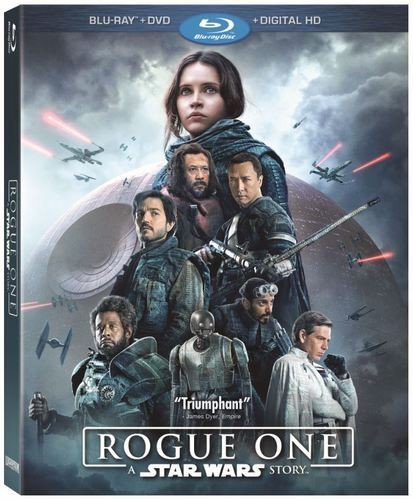 The picture quality is a huge factor here, though. I only got a Blu-ray player a couple of years ago, but now I find it hard to watch any movie in anything less than Blu-ray-quality HD. I certainly wouldn’t want to watch Star Wars in any other way. Nor am I really interested in watching a film on a phone or tablet.

I did double-dip on The Force Awakens, which irritated me at the time, but I still feel I got my money’s worth – I must have watched the first release at least five times (three of them the week it came out). I wanted the “collector’s edition” because of the commentary, though, not the 3D (which I can’t stand). I love audio commentaries, I’ll give in and buy special editions of just about anything for them, and I think it’s a crime that neither TFA release had one with Daisy Ridley and John Boyega.

So it’s Blu-ray all the way for me, even if it means – living in the UK – that I have to wait an infuriating extra week for Rogue One.

6 thoughts to “One Movie, Too Many Freaking Options: Which Rogue One is For You?”