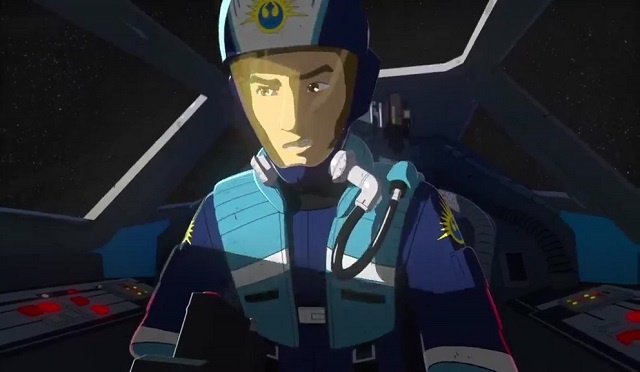 In light of there being four episodes’ worth of Star Wars Resistance out and available through some platforms, while others are limited to watching only the two-part pilot or (in the case of our international friends) nothing at all at the time of writing, it’s difficult to know what exactly to write about. I don’t want to overly spoil things for people who have not had the chance to watch all four episodes that I had access to, yet at the same time why read an article explicitly discussing the show if you have not watched any of it?

So here is my compromise: rather than discuss the ins and outs of the plot that has been thus far shown, since the plot itself is still very much a work in progress and will likely burn slowly over the season’s course, let’s talk about the characters. Specifically, let’s talk about a character, the one that is both the most exposed, and most divisive, of the show: Kazuda Xiono. Kaz is our main character, a “gifted but green” pilot who begins the series flying for the New Republic and is recruited into the titular Resistance by Poe Dameron after catching the elder pilot’s eye on a mission in deep space.

He’s also the sort of personality that is pretty much instantly recognizable to devotees of Star Wars animation since he shares traits with the protagonists of every modern series from the franchise thus far. His youth and enthusiasm have echoes of both Ezra Bridger and, to go even further back, Ahsoka Tano. As with Ezra and Ahsoka, Kaz has a very distinct and strong personality which can certainly be off-putting for some people, but I believe that goes for most of the cast of Resistance in general. Especially in the pilot, everyone’s portrayals are dialed up to eleven to make sure we know who they are and what they’re on about, and we’ll start to get more nuanced as time goes on and the story spools out more. Like with Rebels before it, Resistance seems to be embracing a semi-serial form of storytelling, where each episode stands on its own but story elements and character moments bleed over to those before and after, interconnecting the whole series.

The main difference between Kaz and his two predecessors is, while Ezra and Ahsoka were raised without parents, either by the streets or by a strict monastic order, Kaz is the son of a Senator and his home planet is the capital world of the New Republic. He isn’t as world-weary as Ezra nor as snarky as Ahsoka; rather, he’s sheltered and a bit out of his depth when thrust into many social situations where he isn’t following someone else’s lead. He is used to having most of his problems solved for him, so when he gets into trouble he looks for others to bail him out unless no other options present themselves. 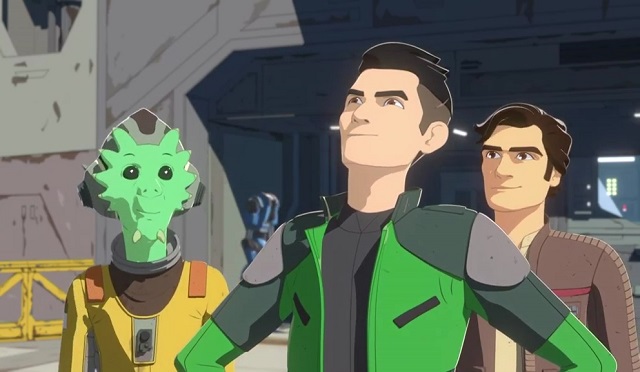 Kaz also checks a lot of boxes for an anime protagonist, if one were to look at the show through that lens. He’s young both physically and emotionally, enthusiastic about his mission to the point of being keet, and a gifted pilot who dreams of being the best in the galaxy. The young boy on a quest to become a master of a chosen craft is seen over and over in anime, especially shonen projects aimed at kids between twelve and eighteen. But he’s also moody when things don’t go his way, has a tendency to slack off on tasks he’s not interested in, and manages to put his foot in his mouth more often than is really prudent for someone ostensibly working as a spy, all of which are fairly common in shonen, where the more over-the-top goofiness is pretty standard fare.

We do learn some specific things about Kaz in the material we have been given so far, both in terms of what the dialogue tells us and what the actions he takes demonstrate. Poe comments that he sees something special in Kaz, both piloting skill and an ability to think outside of the box. Kaz is brave and willing to throw himself headlong into a mission if he finds that mission worthy, such as the fight against the First Order. Problems arise anytime he feels sidetracked; he doesn’t have much patience for distractions that take him away from his mission. He is also rather naïve; he is enthusiastic about his role as a spy but has no idea what being a spy will entail. It’s only when he’s in the air, in a cockpit, that Kaz truly seems at home. When flying, he knows what his job is and what his mission is and how to accomplish both. Spying is very different, a more nuanced, personal role that he is entirely unprepared for.

His piloting skill, misunderstandings with Neeku aside, is not really in doubt. He impressed Poe with his ingenuity, and he flew a rattletrap racer that was falling apart at the rivets with skill enough to impress one of the best pilots on the Colossus. And he managed not to die on either occasion, which may reveal his most enviable trait: luck. Good luck and bad luck both run deep through Kaz being brought to the Colossus and being given his role to play. Part of that just comes with being the protagonist of a serialized show aimed at a young audience; if nothing happened to him the show would be very boring. But the thickness of the dramatic irony around him joining the Resistance so close to the events of The Force Awakens, where the New Republic Senate (likely including his father) and most of its navy, along with Kaz’s home planet, is brought to a horrified, screaming end, can’t be discounted. 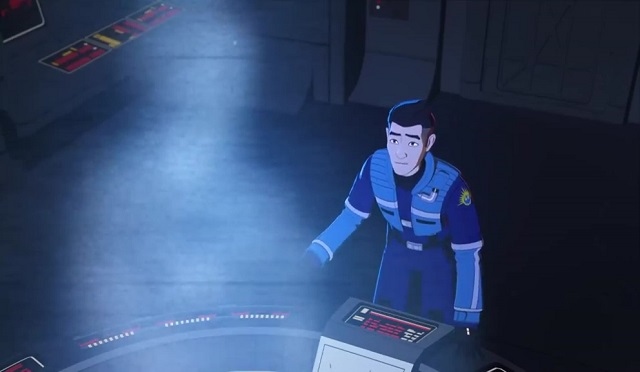 In a show where there are no Jedi and the Force has yet to be even mentioned, Kaz Xiono is clearly the Force’s plaything, pulled away from Hosnian Prime and the New Republic in the nick of time. How that plays out through the knowns and unknowns in the rest of the show’s run obviously remains to be seen. Hosnian Prime is doomed, and other characters like Poe and Leia we know will be addressed elsewhere. But what happens to Kaz, Team Fireball and the rest of the people on the Colossus is entirely up in the air. Kaz might wind up being the best racer on the station. Or he may wind up barely in the top three, and have his quest for the top interrupted by other events. The show is aimed at a younger audience, but the first episode sets Kaz up with a troubled relationship with his father that will, most likely, end in tragedy. How many other bits of dramatic foreshadowing have we gotten that won’t come to light until later?

The side characters of Resistance are an entire article on their own, but Kaz is the show’s lynchpin. As Rebels had with Ezra, there is an undeniable focus character here, and whether a viewer likes or dislikes the show will largely depend on whether they like or dislike Kaz. After seeing the four episodes we’ve gotten thus far, there’s no denying that he has a certain depth and texture to him, but it is the sort of texture that you have to look more closely for. He is loud, he is enthusiastic, and he is often over the top, as befitting the sort of role he fills. But that won’t last forever. The writers are cruel and the story he is involved in is a piñata full of dramatic irony waiting to spill open. For now, let’s enjoy the spirited antics of a young pilot getting his first real taste of the galaxy outside of the bubble he has lived in.