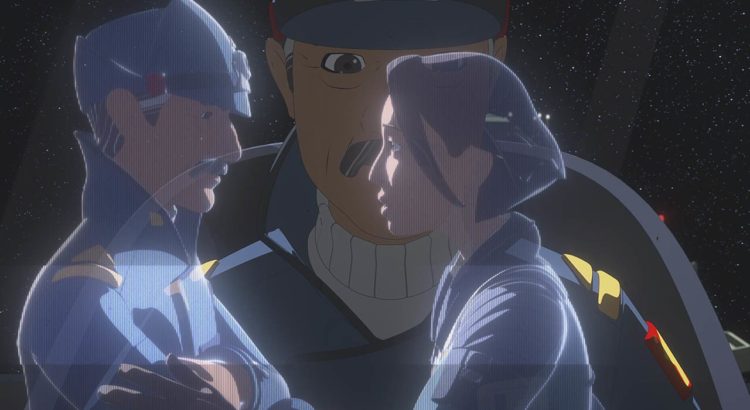 The finale of Star Wars Resistance is going to be upon us shortly. While the middle section of the show’s second season hasn’t been as meaty or meaningful as some of us were perhaps hoping, as we’ve moved toward the end the show has picked up momentum. More than anything, it has given us some memorable new characters, such as Venisa Doza, while still managing to find time to give older, established characters moments of depth and development. An understated but nonetheless important character who has grown quite a bit over the show’s run is who I’ll be highlighting today: Captain Doza himself. But first, let’s circle around on our main character Kaz Xiono for a bit of context.

In the episode “No Place Safe”, Kaz makes the decision to leave the Colossus. The station has found a safe haven on a distant planet, and they have formed an alliance with the local population to allow them to stay out of the First Order’s way, restoring something like their previous status quo on Castilon. With this lull in the fighting, Kaz has a moment to contemplate, and comes to realize that he isn’t content sitting and waiting for the war to end or for the First Order to find them again. With his friends out of danger for the moment, he makes the decision to go back to the fight, to rejoin the Resistance proper. He makes that decision because, in the end, he wants to help people, and now that the Colossus no longer needs his help, he is ready to move on and keep fighting the First Order elsewhere (even if it breaks the hearts of people like Neeku and Torra to see him go).

The episode winds up putting him back where he started when their haven is discovered and the Colossus is forced once again to flee, but the important thought that Kaz has of going where people need him and seeking only to help seems to resonate within Captain Doza. In the very next episode, “Rebuilding the Resistance”, Doza makes the unilateral call to not only allow the Resistance to bring its new recruits to his station, but even decides that they can stay permanently, making the Colossus into a mobile base for the Resistance and its pilots and officially abandoning his neutrality. Inspired by Kaz, and also by the examples of his wife and daughter, Doza is making a decision that he probably should have made long ago.

In some ways, it feels like this is setting up another season for the show that we know will never get made. The idea of the Colossus being a mobile base for the Resistance, moving and striking against the First Order wherever it can, reminds me of the second season of Star Wars Rebels. It’s easy to wish for the show to have been like this, if not all along, then at least since the end of the first season. With a title like Resistance, there have been very few instances of the actual, formal organization of the Resistance in the whole second season, and while it could be said that the makeshift Aces and other people aboard the Colossus are a “resistance” all their own, they’ve done far more running than fighting at this point.

With all of that said, there’s a big character reason why this has happened the way that it has. Captain Doza has been dragging his feet on the idea of fighting against the First Order since the end of the show’s first season, when they were chased off Castilon. Despite it being very clear that the First Order was specifically targeting the Colossus, Doza would not entertain the idea of trying to gather forces, or of ever standing and fighting against them, choosing instead to flee and hunt for safe havens where the First Order could not find them. From the conversation that Griff has with Kaz in the episode “The New World”, we gather that Imanuel Doza defected from the Empire not because he wanted to join the fight against them, but because he was sick of fighting for a corrupt system. Doza doesn’t have the same sense of justice that Kaz has. He’s most concerned with himself and his own, with the safety of the people under his care, especially his daughter.

But the second season of Resistance has shown Doza again and again that such a mindset, while noble in its way, is not sustainable. The Colossus is constantly in danger and running out of supplies, mutinies and plots against him have to be put down, and nowhere is safe from the First Order. He’s also seen that his daughter and the other Aces are more than willing to fight, but they are also outnumbered and lack combat training and experience. Every step of their journey away from Castilon has been fraught with danger from both the First Order and every criminal element around them who sees their vulnerabilities. Neutrality is not an option for them, not when everyone seems to be out for their blood.

It’s important to note that Doza turns from his vehement neutrality to giving the Resistance personnel anything they need without the urging of anyone else, much to Venisa Doza’s shock. There is no cheeky speech from Kaz, or pithy wisdom from Yeager, or even a debate between himself and Venisa, which she clearly expected. So what changed? Perhaps he has simply come to the realization that, after weeks of running and trying to find somewhere to hide the Colossus, it’s time to turn and fight. He ran from war once in his life, but he cannot run from it this time, so rather than wait for it to catch up to him, he puts himself on the side that Venisa chose long ago. For the first time, the entire Doza family is going to fight on the same side.

Just as with Kaz and his development from a bumbling wannabe spy and inept mechanic to a slightly less bumbling ace pilot who can fix his own ship on the fly, Doza has come a long way from the cold authoritarian he was at the beginning of the show. There was a point, lest we forget, when he was basically locking poor adrenaline-addicted Torra in her room for fear that she might find herself in danger off the racing circuit, and that was before the First Order was even on the station. Now, he’s letting her fly missions for the Resistance with barely a bit of light grousing.

Like Kaz, Doza has come to realize that he’s not merely a victim of circumstance in this war, with his station being harried and contested and the people he cares about most being constantly under threat. He’s come to see that he can be of help to the fight against the First Order: he commands a massive mobile fueling and cargo station with room and lodging for many people, which means that he can be a tremendous asset for a group as starved for safe havens as the Resistance is. In a similar way to Kaz wanting to go where people most need him, Doza has turned to being what people need him and his station to be.

When Kaz is leaving the Colossus, Yeager speaks to him, and tells him that he’s grown up a lot in his time with them and has become a different man. But he’s not the only character who has grown; many of the others have as well, and Captain Doza perhaps most of all, even if his growth isn’t as directly stated as Kaz’s. Doza isn’t a hero, but he has learned, reluctantly and slowly, that he cannot sit on the sidelines and wait for the war to pass him by. Now he has finally thrown his lot in with the Resistance, siding at last with both his wife and his daughter, and is willing to endure whatever the consequences may wind up being. He is, finally, where he is most needed, and willing to do what needs to be done.