Wookieepedia identifies individuals by gender, which makes this sort of comparison possible. The Category: Individuals_by_Gender page is therefore the start point for this analysis. A current sample1 yields 22486 individuals with gender status. They can be broken down by gender as follows:

These results are extremely clear: the Star Wars universe is unequivocally male-dominated, with a male-to-female ratio of roughly 3.5:1 rather than the 1:1 we would expect in nature. The number of hermaphroditic individuals is extremely small compared to the whole and composed almost entirely of Hutts. The number of individuals of unidentified gender is actually rather small. It is considerably less than the proportion of individuals of unidentified species. I hypothesize that the revelatory power of gendered pronouns in non-visual media is likely responsible for that discrepancy.
END_OF_DOCUMENT_TOKEN_TO_BE_REPLACED In order to look at the demographics of Star Wars, it makes a certain sense to start by taking absolutely everything together – all characters recorded in all works. This fits with the principle of a single continuity that has so far governed the EU. Additionally, this information has already been recorded, in terms of ‘Individuals’ on Wookieepedia.
END_OF_DOCUMENT_TOKEN_TO_BE_REPLACED 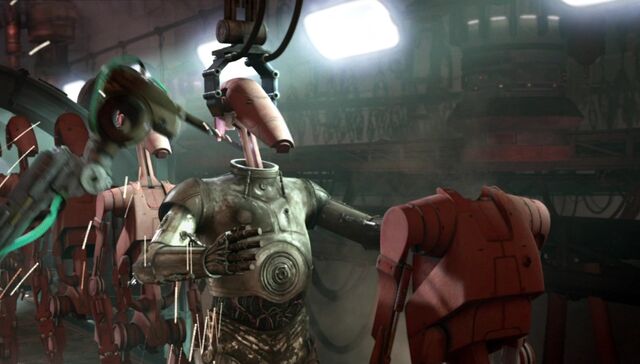 The Phantom Menace needed to establish villains a PG-rated movie would be comfortable slicing up with laser swords in their hundreds – it needed zombies, or monsters. Non-people. The stylistic trappings of a futuristic universe made robots an obvious choice. Threepio and Artoo, on the other hand, fill a very different narrative role and remind me of nothing so much as those magical animals in Disney movies. Those part-comic relief, part-best-friend, part-pet, part-plot-MacGuffin, often sent-by-a-fairy-godparent-with-important-messages, not-quite-people. Droids are magical helpers. Droids are familiars. If this were pure fantasy, Artoo-Detoo might well be Puck. Mechanizing the role is, once again, an easy way to adhere to the decor of the Star Wars universe, but slapping “droid” on both the comedy sidekicks and the faceless minions implies a commonality I don’t actually think is there. The similarities are cosmetic. Thinking of Threepio and Artoo as soulless is, well, soulless, but the movies clearly invite us not to think about battle droids as anything other than automata.
END_OF_DOCUMENT_TOKEN_TO_BE_REPLACED

No, Force Tunnel Vision isn’t a Force power you’ve never heard of. It’s the tendency that has emerged ever since the release of the prequels to focus stories on the Jedi and emphasize the Jedi-vs.-Sith conflict as the core of storytelling. This has compounded the issue of supporting cast underuse in the post-Return of the Jedi era, as the focus has become too narrow to take in much of the wider universe. In all eras it has resulted in repetitive storytelling as the Sith are trotted out again and again to fight Jedi protagonists. In this post, I will cover how the prequels transitioned Star Wars from stories that included Jedi and Sith to stories that were about Jedi and Sith, just how monotonous this has made the Star Wars universe, and how this has damaged the Star Wars universe by excluding non-Force-sensitives from the story.

The way it was

Jedi and Sith were both present in the original Star Wars trilogy. It was central to the films’ story that Luke Skywalker learned to become a Jedi Knight from Obi-Wan Kenobi and Yoda so that he could defeat the evil Force-user Emperor Palpatine and redeem his father Anakin Skywalker from life as Darth Vader, Dark Lord of the Sith. How, then, can I say that the prequel trilogy changed Star Wars’ focus? The difference is between stories that include Jedi and Sith as a component and stories that are centrally about Jedi, Sith, and the struggle between light and dark sides of the Force. The issue is the context in which the Force elements of the storyline are placed.

In the original trilogy, the conflict between Luke and Darth Vader, and later the Emperor, was vital. The introduction of the Jedi Knights and the light and dark sides of the Force were key components of Star Wars’ unique universe. The story, however, was not simply about the Jedi. Luke’s conflict with the dark side’s servants was one component of a much larger storyline concerning the war between the Rebel Alliance and the Galactic Empire; the light and dark sides were merely elements of the struggle between freedom and tyranny, good and evil in the broadest sense. Luke did not fight alone, but as part of the Rebellion, alongside the gunslinger Han, political leader Leia, scoundrel-turned-administrator-turned-Rebel Lando, and ordinary warriors like Wedge Antilles, Admiral Ackbar, and General Rieekan. He and his allies fought not only Darth Vader and the dark side, but also Forceless manifestations of tyranny like Grand Moff Tarkin, Death Stars, and stormtroopers; and Forceless agents of criminal corruption like Jabba the Hutt and Boba Fett. Jedi and Sith were one component of the bigger story, which included ordinary soldiers, political figures, and the criminal underworld.
END_OF_DOCUMENT_TOKEN_TO_BE_REPLACED

One of the most distinctive features about the post-Return of the Jedi Expanded Universe is the wealth of characters who have become part of a large, unified cast supporting the small group of movie leads. This sort of cast is a fairly unique asset for a franchise, and even for an era within this particular franchise, yet in recent years it has been dismally handled. Not only have fewer members of the secondary cast been used and been used more poorly, but the focus has crept from a large cross-section of the galaxy squarely onto members of the Jedi Order. In this post, I want to address how this situation came to be and make the case for better use of the unified cast, to be followed up by a post specifically focusing on the implications of limiting stories to an emphasis on Force-sensitives.

The road to the unified cast

The initial EU did not set out to create a large-cast universe in the way of, say, A Song of Ice and Fire. This makes a certain amount of sense, as the original films had not featured a big recurring cast. They did, however, set the stage for the eventual expansion of the cast.

Aside from the villains and the core cast of Luke, Leia, Han, Chewbacca, Artoo, Threepio, and eventually Lando, the films featured almost no recurring characters. Wedge Antilles was the only supporting good guy to make it through multiple movies, much less the entire trilogy. The focus was clearly on a small band of heroes. But what the movies did have was a large-galaxy aesthetic resulting from the use of a lot of supporting characters who just didn’t recur. We didn’t get a consistent Rebel leader throughout the films, but in getting General Dodonna, General Rieekan, General Madine, Admiral Ackbar, and Mon Mothma, we got a large body of distinctive, interesting leaders who could be used and expanded on in further stories, along with the sense that the Rebellion was big and full of important people. There was a lot there for the EU to work with, and a sense that the Star Wars galaxy should have a deep bench of characters.
END_OF_DOCUMENT_TOKEN_TO_BE_REPLACED