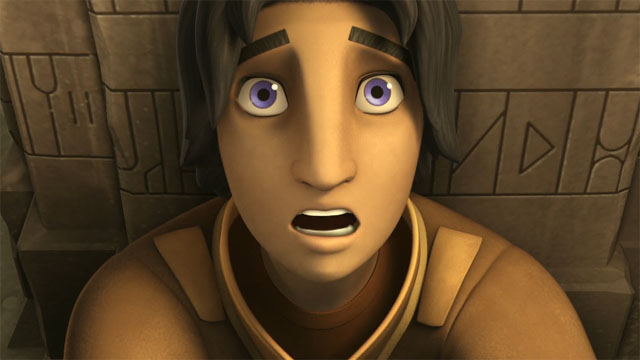 Ben: Let’s be clear about something: Star Wars fans can be cynical. The old guard has been around long enough to know better than take marketing hype and pre-release buildup at its word. The Phantom Menace, Revenge of the Sith, The Force Unleashed, The Clone Wars, none of it has ever fully lived up to the standards nostalgia and the original trilogy have given most of us. Even the good stuff, books, comics, video games, whatever they might be, aren’t bulletproof, because they all have to walk the fine line between appealing to nostalgia and striking out into something new. On top of that, the Disney purchase has raised that standard even higher. Nothing done in the post-Lucas era could ever stand up beside the greatness of ESB, could it?

So what happens when a show like Rebels comes along? Rebels had a terribly hard row to hoe right out of the gate, aping elements of the original trilogy while doggedly knitting in elements from the prequels and TCW alike. “It’s too cartoony”, some say, “it’s obviously being made for kids.” “It’s not enough like TCW,” others grumble, “it’s too light and not mature.” Another complaint heard a lot is “It’s beating Star Wars into the ground, all Disney cares about is money.”

In this article, and with this week’s episode, I’m asking all of my fellow cynics to do something we’re unaccustomed to: put their suspicion and pessimism aside for twenty-two minutes, put their dog-eared copies of Heir to the Empire down and take a step back. Yes, the episode is centered on Ezra’s quest to become a Jedi and Kanan’s journey to reclaim his heritage in a time where (at least in previous canon) Jedi didn’t and couldn’t exist. Yes, bringing Yoda into the Rebels’ story is a bit of a stretch of its “big-galaxy” gimmick. Yes, bringing Frank Oz back to perform one of his most recognizable and beloved roles is a marketing ploy. All of these things can add up, and it’s easy to pre-judge something with Star Wars in the title based on what has come before and what will likely come after.

However, I think that “Path of the Jedi” is the best argument that Rebels has made for itself yet, so long as one is willing to shut down the critic circuits and look at it afresh.

Rebels’ greatest strength, which I outlined in the revisit of last episode, is in its characters. A serialized show format greatly benefits the players acting in it, and both Kanan and Ezra have changed and matured as the show has gone on. The progression from world-weary loner and street rat to Master and Apprentice is something that has been building from the show’s beginning. Their being Jedi is taking a terrific risk in their day and age, and they both know it. But they also know that they don’t have any choice. If either of them wants to continue to make a difference in the galaxy, if they want to help and protect those they care about, they both need to learn more about the Force, and about themselves.

Yoda’s inclusion in this story works because he isn’t shoved into a story where he doesn’t belong. He’s a teacher, first and foremost, and despite being half a galaxy away from Lothal, he can still teach a Jedi in need of direction. This isn’t kung-fu-action-Yoda from Revenge of the Sith or TCW. This is the teasing, playful, wise and thoughtful old hermit we saw in The Empire Strikes Back, gently rebuking, carefully urging, letting his students learn their own lessons and have their own experiences. And Frank Oz brings everything to the role that one would hope: familiarity, warmth, insight, and just the right amount of mysticism to keep his presence a delight, rather than a handicap.
I’m not asking anyone to check their brains at the door. I’m saying that, if it’s Star Wars you want, Rebels is some of the best Star Wars to come along in a long time. It’s not above criticism, not in the least way, but it’s also far, far better than a lot of the complaints and ragging would have one believe. This week’s episode gives us mature character-based storytelling with nostalgia sprinkled on top, following a perfect blueprint for whatever the future may hold for the franchise. 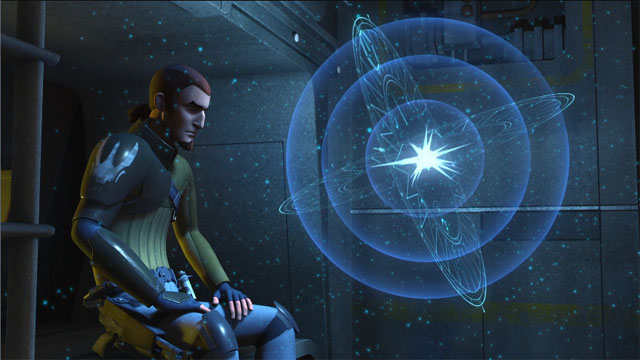 Jay: Here’s the thing, I liked the episode. It was pretty good — I liked that Ezra’s anger caused him to “fall,” I liked the visual language and the metaphor, I liked Yoda redirecting Ezra’s regard for his friends to blunt the anger he felt. It was a great episode for the Force and for the Jedi way. The problem is that it could have done all of this without Yoda. Don’t get me wrong, Yoda was done very well (how could he not, with Frank Oz?) but — Yoda shouldn’t be used as a narrative crutch. The Force is mysterious enough, and the character development the show has wrought good enough that relying on Yoda to give Kanan and Ezra these epiphanies really weakens them. This is so regardless of whether the Yoda they hear is real or not.

Now, this show is in a tricky position. Until the film comes out, it’s basically the lead element of the new Star Wars. Unlike TCW, their cast is wholly original — but there are risks in making the show seem like Star Wars in name only. That’s presumably why we saw Darth Vader, the droids, Bail Organa, and now Yoda. But there’s a difference in grounding a show in a familiar setting — Vader and the droids help garnish the job mostly played by familiar stormtroopers and TIEs. But even with “Droids in Distress”, these movie characters never so fully drove an episode as is the case here. And Yoda drove what is probably the most important character development episode to date.

But he doesn’t need to. The show’s great strength is its original characters — full of personality — and their ability to grow together as a team. We saw Kanan and Ezra struggle to accept each other, we saw Ezra and Zeb struggle to get along, we saw Sabine and Hera struggle to trust each other. We didn’t need Yoda for those, and we didn’t need Yoda in this episode. This show has to stand on its own, and it should. That was the very premise of the show: it’s a big galaxy, but every little bit counts and these guys are doing their part in a much bigger struggle against the Empire. They’re important even if they never meet Luke and Leia, and honestly they shouldn’t need to in order to accomplish their goals.

Yoda was nigh perfect. But I wish we didn’t have to see him at all. The original cast of Rebels can stand on their own two feet.