Ben: Something that I’ve praised Star Wars Rebels for for a long time now is its character development. Because it focuses on a central core of characters and tells its story in a chronological order, the show gives the characters the opportunity to learn and change as the story progresses and time passes within the narrative. We’ve seen Ezra, Kanan, Sabine and even Zeb evolve their personalities and beliefs (some more than others) as their horizons have changed, their viewpoints have been challenged and they’ve been through increasingly difficult trials.

But there are a couple of characters in the show who haven’t really evolved in that sense as we move toward the end of the show’s second season. Hera is a major one, as is our favorite ISB officer Agent Kallus. And, of course, Chopper. Character development in that sense hasn’t really happened, because none of them have really changed. The Hera we meet in this show, for instance, is basically the same Hera that we see in A New Dawn, give or take a few circumstances.

There’s another aspect to character development, though, and that’s how an audience’s perception of a character changes as we see more of them. We see Hera and Kallus differently now than we did at the beginning of the show because we’ve learned more about them. And the same can be said for everyone’s favorite grumpy astromech droid after this week’s episode. Chopper’s character after his adventure with AP-5 is the same as it is before, but we learn more about him and our own view of him evolves.

What did we know about Chopper going into this episode? That he was grouch, almost a sociopath at times, but still had a fiercely loyal streak buried somewhere deep inside of him. Part of what this episode showed us about him is why he is so loyal to the Ghost‘s crew, and Hera in particular, but also something of why he has such a quirky personality. Of course, it didn’t tell us everything about him, but there’s nothing wrong with that. Just enough to help us understand him a bit more by learning a bit of where he came from.

What does everyone else think? Were you fans of what we learned about Chopper in this episode, and did it affect how you see him at all? 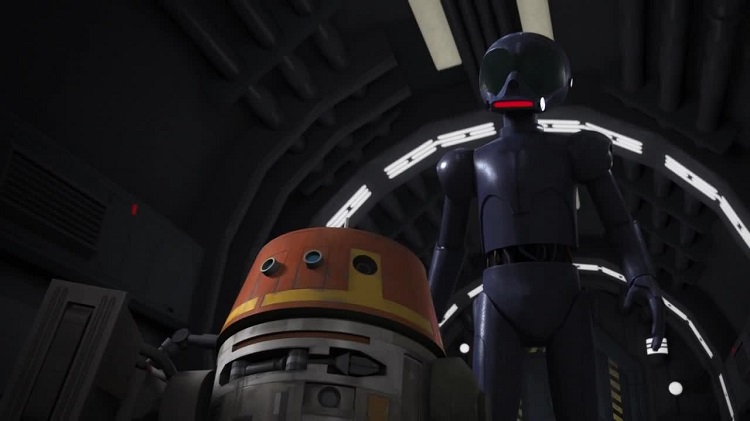 Jay: I think there are two ways to accomplish character development: changing the character, or changing the audience’s understanding of the character (sometimes both). This episode didn’t change Chopper, really — the Chopper that came in was the Chopper that came out. But the audience got to appreciate him as more than just a punchline, or a joke. Previously, Chopper had elements of “humanity” — grudges, jokes, and even saving the crew once or twice. But caring about matching legs? That’s a level of self-actualization that we’ve never seen before, because it reflects not just Chopper’s sense of self but also Chopper’s vanity. Chopper cares what others think of his mismatched parts.

Who’d have guessed Chopper and Threepio had something in common?

We also learn about his history with Hera, and that actually he’s quite attached to her. He’s touched by her gesture. And it affects him, it’s what makes him want to be a Rebel. It’s such a tiny thing, but huge. Especially with a droid.

There’s also the slavery theme with droids which is a difficult, and complex subject. The episode doesn’t really go into it, so much as the idea of personhood: droids aren’t things, they can have free will. But in humanity’s darker days, that was very much in dispute by alleged philosophers speaking of slavery — dark subject, and the episode doesn’t go into it too well but it’s nice that it’s dropped in there. It’s important and might be revisited later, especially in connection with the sheer dismissal the crew gives to Chopper’s request earlier in the episode. And any discussion of the slavery thing isn’t complete without mentioning the great “I’m Spartacus!” gag on Rebels Recon regarding Chopper’s VA.

And Chopper did, of course, cause AP-5 to change his views. I’m reminded of one of our earliest Rebels Revisited, where Ben discussed how Hera awoke Ezra’s sense of selflessness. Here, Chopper awoke AP-5’s sense of self. Looks like Hera really did rub off on Chopper a bit.

The more I think about it, the more I like it. I’m not usually one for droid hijinx and I’ll happily joke in-character about droids being furniture, but I enjoy when Star Wars actually looks into the implications of how droids are treated. This was not just a light, fun episode (although it was that as well) it’s one where you get more out of it the more you think on it. 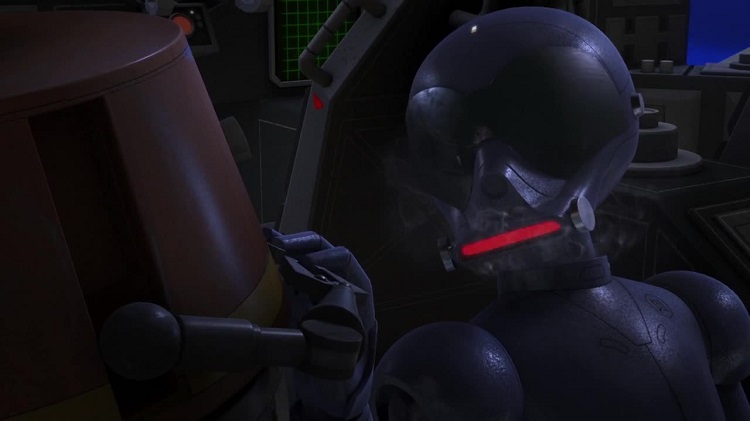 Mike: I’m glad you brought up AP-5, Jay—we can’t discuss character development in this episode without mentioning the biggest evolution of all; AP-5 going from a mild-mannered inventory droid minutes from the scrap heap to a cunning, jocular free agent.

One great way to learn about our main characters is by bumping them up against someone outside the main cast and seeing what shakes out of the new dynamics; this was the best part of last season’s first Lando episode, and even though AP-5 is a brand-new character, having twenty minutes to play off of the technically mute Chopper made him both compelling and fleshed out in seemingly no time.

Rebels Recon explicitly referring to he and Chopper as “veterans” of the Clone Wars also called to mind the clone trooper episodes that brought Rex and company into the mix—another group of leftovers who aren’t quite in one piece anymore, but remain interesting and useful. It’s easy to overlook AP-5 as being a one-off character who only exists to enhance Chopper’s story, but Rex serves a similar role with regard to Ahsoka this season, and he’s nevertheless felt right at home on the Ghost. I hope AP-5 really does join the family too.

Sarah: I basically agree with what everyone’s said here. It’s a character-focused episode that doesn’t change the character but instead fleshes them out so that we see them in a different light. Just because a character doesn’t go through a conflict and emerge a changed person doesn’t mean that character development didn’t happen.

Hera is actually an excellent example of that. Like Ben said, she hasn’t gone through much in-universe character development and is more or less the same Twi’lek pilot from A New Dawn. But in “Homecoming” we learned more about her past, specifically about her relationship with her freedom-fighting father and how she frames the fight against the Empire. And with that one episode we suddenly had a different understanding of her and her motivations for fighting. But nothing had really changed much for her in-universe; it was our perception of her that changed instead.

While the bit of Chopper’s history we learned didn’t offer quite so drastic a change in how we see the little astromech, it still gives us some insight into his personality. All we’ve known of him so far is that he’s an (endearing) asshole; he might come through and save the day every once in a while but mostly seemed to be there to sass the crew and cause headaches. But we learn that he has his own reasons for sticking around the Ghost crew and is loyal to them (or at least to Hera) in his own way. He’s a stubborn little droid with a tenacity to survive. He serves as a foil AP-5, a droid who has basically given up and is going through the motions of existence. And it’s Chopper’s very assholeish-ness that causes AP-5 to self-actualize and begin to live again (in a manner of speaking).

To expand on that a bit, “The Forgotten Droid” touches on the theme of freedom that runs as an undercurrent to most, if not all, stories in a galaxy far far away. Droids are certainly sentient (though to what degree is a far deeper philosophical debate than can be covered here) and yet are still property to be shuttled around, mindwiped, or deactivated at the will of their owners. Though we see characters form deeply personal bonds with their droids and treating them with the same respect they would a person, it seems that is the exception rather than the norm. Frustratingly, Star Wars never really does more than scratch the surface of exploring this idea of personhood and slavery when it comes to droids, but the hint of it that we got in this episode added a lot to Chopper’s character.

Sure, Chopper was probably 90% motivated by self-preservation and not altruism and probably didn’t care that much if AP-5 ended up self-actualizing. But once we know that Chopper himself was saved from the scrap pile by Hera, it’s hard to not think that he was maybe using his own brand of tough love to similarly rescue a fellow droid. Learning about Chopper’s history enables us to see that there’s more to him than sass and funny noises. Chopper is still the same old Chopper we know and love (or love to hate), but now that we know more about him and where he comes from, we perceive him differently. Chopper didn’t change; the audience did.