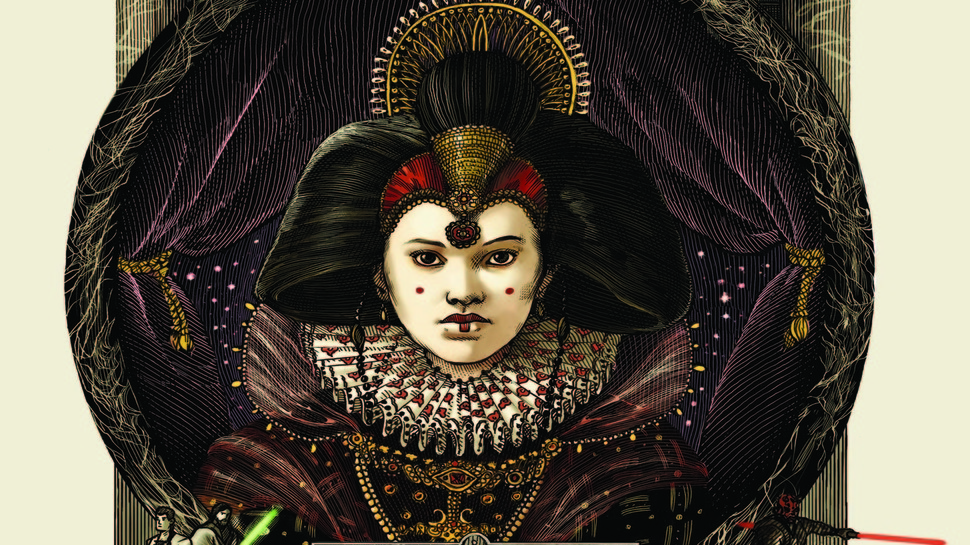 In case you hadn’t noticed, I have a pretty strong interest in royalty and in politics. My passion is shared by my old friend, Bria LaVorgna. Bria and I have decided to co-write a piece on monarchy in Star Wars, presented alternatingly on the sites we write for: Eleven-ThirtyEight and Tosche Station. We think that the close connection Star Wars has to monarchy is pretty unusual and worth examining in detail. We’ll start out with a brief survey of monarchy in Star Wars, before moving on to an examination of how monarchy works on three prominent Star Wars planets.

(Programming note: I’ll update this intro post with links to each piece on Tosche Station and Eleven-ThirtyEight as they go up this week. Look for a new piece each day from now through Thursday!) 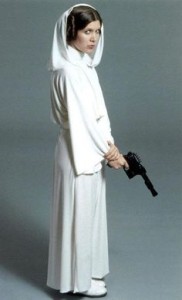 Unusually among science fiction franchises, Star Wars has a strong attachment to monarchy. This is partly due to the nature of Star Wars as space opera rather than pure science fiction, but it’s not really a genre issue. Monarchy is part of the DNA of Star Wars and always has been. Initially, Princess Leia served as the princess figure in the fairy tale conception of Star Wars (one of many inspirations for Star Wars, including myth, serial adventures, etc.) and Leia proves in the very first film that she’s not merely a damsel in distress. But fairy tale inspirations only get us part of the way — monarchy is a persistent and pervasive part of Star Wars, reflected in the Naboo of the prequel trilogy, Hapes of the Expanded Universe, and a myriad of monarchies in the Clone Wars. In fact, The Clone Wars made such a use of monarchies that worlds that the EU had established as democracies (Mon Calamari) ended up becoming monarchies. George Lucas had a pretty direct hand in The Clone Wars, and he obviously crafted the story of the saga, so monarchy is just a part of his political conception of Star Wars. But the question is — why? Why does a story about the struggle between light and dark, between democracy and tyranny, feature monarchies so centrally?

END_OF_DOCUMENT_TOKEN_TO_BE_REPLACED 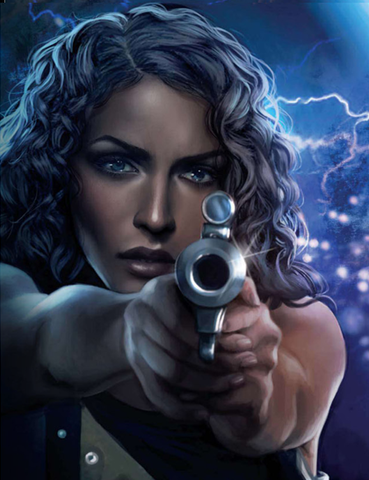 If you’re new-ish to Eleven-ThirtyEight, this may be your first exposure to Aggressive Negotiations, our occasional chat-session format. Aggressive Negotiations are just that; fast-paced, live discussions among members of the ETE staff (and others), often focused on hot-button topics like the earliest previews of Star Wars Rebels or Dark Horse Comics losing the Star Wars license. This time around the gang got together to dish on Heir to the Jedi, in particular the big spoiler at the end of the book—so consider this your warning on that score. Remember, this format is about fandom at its most raw; no censorship, no second-guessing, and a bare minimum of copy-editing. Cheers! – Mike

David: here i am as well

David: all fresh and clean

Lisa: so fresh and so clean

Lisa: I think we need Ben cuz I’m pretty sure he hated it

Jay: eh. It was a real struggle to even read it

David: I actually hated it, so I might fill that role :p 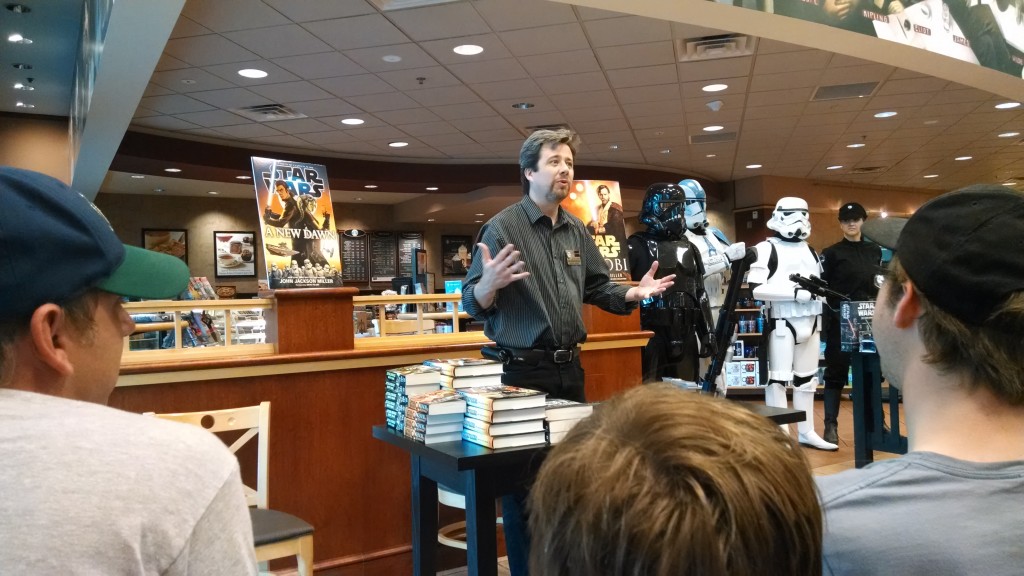 When a book is as hotly anticipated as A New Dawn, just one review might not be good enough. Several of us at Eleven-ThirtyEight were able to make our way through it over the last couple weeks, and in order to give everyone a chance to speak their mind, myself, Ben Wahrman, Jay Shah, and Rocky Blonshine got together last weekend for some informal Aggressive Negotiations.

It’s been a while, so if you’re unfamiliar with this series, all you need to know is that it’s basically a low-key chat session with only loose moderation, and no holds barred—no censorship, no editing, no typo repair. Enjoy!

Mike: Let’s start with general impressions of the book itself. Was it pretty much what everyone was hoping for?

Ben: i loved Kenobi, and this was about on that level, but different

Mike: i’m not as over-the-moon about it as i was Kenobi, but it was definitely classic JJM

Jay: More or less. I wanted confirmation that EU would still be used, especially background information. And I was hoping that it would make the characters from Rebels seem interesting.

Rocky: I was so scared that this book wouldn’t feel like the EU we know and love, but it had a lot of the feel of classic EU stuff. END_OF_DOCUMENT_TOKEN_TO_BE_REPLACED True story: the first time five of us got together for an Aggressive Negotiations chat, it took over a month to work out the scheduling—some of us had work, some were traveling, and Ben Crofts insisted on being British for some reason. So when the news broke yesterday that the license for Star Wars comics, as many have spent the past year sensibly predicting, would be leaving Dark Horse after this year and coming “home” to fellow Disney property Marvel, it surely must have been fate that most of us were able to get together only about twenty-four hours later to share our thoughts.

We’ll have some more polished reactions in the weeks to come (and don’t miss Becca’s early analysis of the license situation from late last year), but for now, enjoy our decidedly un-polished, un-copy-edited discussion. And cheers to the fine people of Dark Horse Comics for 23 awesome years.

Alexander: So, Marvel it is.

Mike: that’s a good starting point: does the license switch guarantee a reboot?

Alexander: I don’t think it guarantees it, but I think it’s a very strong indicator of it.

Ben: I think it makes it more likely, yes

Mike: is there any precedent for continuity among competitors?

Jay: It certainly makes it more likely, especially if they want to keep a single universe

Jay: but Marvel is a different beast.
END_OF_DOCUMENT_TOKEN_TO_BE_REPLACED

October 26, 2013 – a day that will live in virtual infamy? No, not right, insanity? Getting closer I suppose. Four Star Wars fans got together for what was to be a short chat on the future of the Expanded Universe. Three in Britain, one in Germany – so the EU was to discuss…. the EU! (And there’s more where that came from!) Ground rules were set – a couple inevitably broken – a rough timetable set, though it really was more like a guideline and said short chat became an epic spot of online comedy mixed with some serious points!

The participants with me were: (brackets indicate TFN forum usernames)

Stefan: Ok then we better set something straight now: NO 3 million clones, no death star diameters, no superstardestroyer lengths

Becca: deal, I can’t remember why half that stuff is contentious anyway. (Well okay, even I remember most of the 3 million clones fiasco BUT STILL)

Gorefiend: As far as I am concerned only evil Clones fought against the Republic in the Clone Wars, the Death Star is the size of a moon and Vader’s Star Destroyer is big.

Stefan: Evil is a matter of point of view

but I agree there. I want my old… well ancient… Clone Wars… Republic invaded by Mandalorians who use clones against it.

(EDIT: Yes, Ewoks, every controversy going and I hadn’t even turned up, still, if others do the work for you why worry?)

Becca: Ben! Two things: 1) I’m assuming you’ll be acting as an informal mod for the chat, and 2) we discussed it and we’re hoping you’re gonna run this thing through a spellchecker and correct for typos before it goes live!

(EDIT: They hoped – correctly as it turns out.)
END_OF_DOCUMENT_TOKEN_TO_BE_REPLACED